Last year, 92 percent of the directors who made the top 250 domestic movies were male. A mere 15.6 percent of the Directors Guild of America membership is female. And only one woman has won the best-director Oscar in the award’s 90-year history: Kathryn Bigelow, for “The Hurt Locker,” with only a small handful of others even being nominated.

None of this information is new, and it’s been a dismaying trend for decades. But the documentary “This Changes Everything” synthesizes all that data along with interviews from a truly mind-boggling array of A-listers both in front of and behind the camera to create a damning portrait of Hollywood’s systematic sexism and discrimination. In between, we see clips from both movies and television that illustrate the film’s points in amusing and often striking ways.

“This Changes Everything” tries to get its arms around a lot, from appalling anecdotes of abhorrent behavior to deep historical context from the silent era to the modern-day repercussions of the #MeToo and #TimesUp movements. It couldn’t be timelier, and its simmering feeling of frustration is palpable. Just recently, we learned that Andrea Arnold’s work directing “Big Little Lies” season two reportedly was altered significantly to fit the style of season one director Jean-Marc Vallée.

Which is why it’s so jarring and even bizarre that once the credits roll, the first words we see are: Directed by Tom Donahue. One of the film’s main, salient points is that it isn’t all that hard to find gifted, visionary women to direct, and that the powers that be—agents, studio executives, producers, etc.—simply haven’t bothered to look for far too long. The cinematographer, Stefano Ferrari, also is a man. The credits mention that 75 percent of the crew working on the film was female, but it sort of seems like a no-brainer to have a woman direct the movie about the fact that women don’t direct enough movies.

Donahue is a longtime documentarian whose work includes “Thank You for Your Service,” about how the government has failed the U.S. military in treating mental health issues, and “Guest of Cindy Sherman.” Those are pretty specific topics. “This Changes Everything” encompasses a massive subject from a variety of angles in a brief amount of time, and the results can feel a bit choppy.

The film is at its best when it gives the smart, talented, diverse collection of women the opportunity to tell their stories, relive their battles and share their feelings. Reese Witherspoon, Jessica Chastain, Meryl Streep, Rashida Jones, Natalie Portman, Tracee Ellis Ross and many, many more actresses talk passionately and persuasively about the need to kick the door open and tell women’s stories in ways that are real and rich. Cate Blanchett and Taraji P. Henson revel in revealing how they’ll take an empty, clichéd girlfriend part, then twist it and tweak it into a character who’s far more interesting. Sandra Oh speaks movingly about the importance of seeing actresses who looked like her for the first time in “The Joy Luck Club.” And Tiffany Haddish—totally unsurprisingly—gets the biggest laughs of all when she recalls the thrill of seeing Diahann Carroll stride into a room and start a catfight with Joan Collins on “Dynasty.”

Behind the scenes, “This Changes Everything” offers several nuggets that are both illuminating and infuriating. Kimberly Peirce talks about how it took her nine years to make her second feature after her critically acclaimed debut, “Boys Don’t Cry,” which earned Hilary Swank a best-actress Oscar. Brenda Chapman explains her thinking in conceiving Pixar’s “Brave”: “ I purposely went for a princess so I could throw the princess thing on its head.” (But then the movie weirdly fails to follow up with the fact that Chapman was forced to share directing credit with Mark Andrews once “Brave” came out, rather than serving as the first woman to direct a Pixar feature.) And Julie Dash eloquently expresses one of the many reasons it matters to have a woman at the helm: “Our camera placement is different because our gaze is different.”'

Geena Davis—who’s also an executive producer here—bridges these two perspectives. She speaks candidly about the way she’s been depicted on screen, how she and many others thought the revolutionary “Thelma & Louise” would “change everything” (hence the title) back in 1991, and the research she’s done on the portrayal of women in children’s programming through her Geena Davis Institute on Gender in Media. Here’s where some of the more eye-opening information emerges in the documentary, as well as the profound possibility of shaping young minds in positive ways.

But then the film loses momentum when it wanders into the weeds of various lawsuits and instances of workplace discrimination. Certainly, this facet is germane to telling the full story, but it’s dry and not as visually or emotionally arresting as the rest of the film. It’s a lot of documents and newspaper headlines. There’s a whole side trip to a cinema in Stockholm that only shows movies that have passed the Bechdel test—i.e., does it feature two female characters talking about something other than a man?—which is fun, but feels wedged-in. And the whole thing wraps up in rushed fashion with the Trump era ushering in a wave of women’s marches and reigniting a spark of activism.

But these stories matter. Representation matters. Flawed as it is, “This Changes Everything” matters – and maybe it’ll even make a difference. 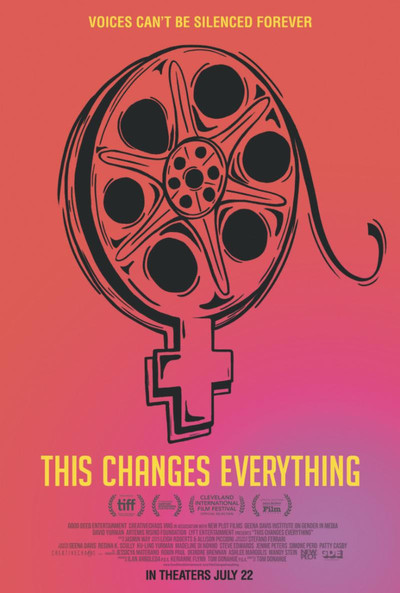 Chloë Grace Moretz as Herself

Natalie Portman as Herself

Jessica Chastain as Herself

Cate Blanchett as Herself

Reese Witherspoon as Herself

Amandla Stenberg as Herself

Ellen Pompeo as Herself

Marisa Tomei as Herself

Meryl Streep as Herself

Sharon Stone as Herself