Get on the bus, get online

Michel Gondry's new film is a vivid snapshot of an interracial group of teenagers as they take a bus ride home on the last day of school. The movie opens with a great sequence of the students leaving a Bronx public high school and retrieving their mobile phones from a makeshift storage run by a local grocer. There may be a ban on electronic devices at school, but these kids have gigabytes flowing through their bloodstreams. Once they've got their phones, they're back in the world. Throughout the film, we see a steady flow of text messages, links and videos swirling around the bus and beyond: defining and destroying relationships, making people laugh and cry, bearing news both good and tragic.

The film introduces a dozen or so characters and shifts the narrative between them in an effortless, natural way that gives us a good idea of the group dynamics, as well as some individual backstories. Even though the whole of "The We and the I" is set inside the bus, Gondry peppers the film with innovative flashbacks, shot on low-def video and serving as visual footnotes: some real, some imaginary. The whole movie feels like a breeze and has the lively rhythm of the kids' talk, which sounds totally authentic and was actually improvised in a workshop Gondry ran with his actors prior to the shooting.

The material truly feels like it arose from the kids themselves: they're playing characters who seem close to who they really are, which is not to say they're not acting. Gondry has done a great job with easing them into a relaxed mode that — combined with fantastic camerawork by Alex Disenhof and sharp editing by Gondry's regular collaborator Jeff Buchanan — gives the film a spontaneous vibe. "

The We and the I" is filled with little details that ring true: the way the kids relate to one another, roll their eyes at each other, play stupid jokes, make guest lists for sweet sixteen parties, etc. In terms of sheer authenticity, this may be the single most real film about how contemporary American teenagers of assorted ethnicities behave — which is all the more remarkable if one keeps in mind that Gondry is a Frenchman.

As the day comes to a close and the bus is nearing its final stop, the group gets smaller and the movie becomes more focused, finally zeroing in on the rambunctious Michael (Michael Brodie) and the quiet, artistically inclined Teresa (Teresa Lynn). Throughout the film, we've seen the multiple ways in which these two have circled around each other, with the boy acting stupidly most of the time and the girl retreating into her drawing.

During the final minutes, after the sun has set and the bus moves through the night, Michael and Teresa learn a tragic punch line to a funny video clip everyone was watching before. We are left to suspect that these two have connected on some level and it's too bad Gondry doesn't develop the subject any further (all we get is their muted conversation as the credits roll, with both actors seemingly out of character).

In many ways, the film plays like a "The Breakfast Club"-lite version of all the coming-of-age stories in which a group of teenagers slowly reveals insecurities, hopes and fears. What's remarkable about "The We and the I" is its near-total freedom from cliché and stereotype of any sort. Most of the kids are black, but the film doesn't give them a stock set of problems that the movies always associate with black teenagers.

There's a gay couple that doesn't struggle with being gay — only with being a couple. Some perfunctory gay jokes aside, there's not a single suggestion that any of the kids riding the bus has any problem with accepting the two guys being together. Same goes for race: it's not that Gondry suggests that America went happily post-racial all of a sudden (an early episode with an older white woman making a repugnant comment makes that all too clear), but he doesn't treat his film as a soapbox, either.

Given the structure of the film and its predominantly Black cast, "The We and the I" bears some (superficial) resemblance to "Get on the Bus," Spike Lee's great rant-fueled vehicle from 1996. The differences are significant, though. Save for a pronounced flair for visual experiment, one probably couldn't find a filmmaker more unlike Spike Lee than Gondry. While not exactly carefree, he doesn't seem to have a political bone in his body. Whatever we make of his avoidance of topical issues, it's willful and pronounced. When the driver of the bus (first-time actress Mia Lobo) advocates a career in the U.S. Army as a great life choice for a young person, Teresa just walks away, and Gondry leaves us guessing whether she does so because she disagrees or because she's bored with the subject. Can you even imagine that happening on Lee's bus ... ?

Judging from "The We and the I" and his superb 2005 concert film "Dave Chappelle's Block Party," Gondry is drawn to predominantly black ensemble pieces. He's also attracted — as evidenced by "The Science of Sleep," "Be Kind Rewind" and just about every music video he's ever directed — to ingenuity, finding pleasure in a joyful, DIY junkyard spirit. This combination makes him a perfect director to one day make a successful movie version of "Fat Albert" (which actually gets referenced here), and it serves him well in "The We and the I." As soon as we see the opening shot of a bus-shaped boom box zapping its way through a Bronx sidewalk, we know we're in Gondryland. There are little flourishes like that throughout film, which is divided into three parts ("The Bullies," "The Chaos," "The I").

Neither polished nor pointed, "The We and the I" may have one or two cool ideas too many for its own good (I, for one, could have done without the sudden surges of the barely-relevant "Theme from Shaft" on the soundtrack), but remains a fresh and engaging movie nevertheless. One can tell it grew from an improvised workshop because it lacks a neat structure and resolution (as far as bus rides go, the film's emotional payoff is nowhere near that of the Richard Pryor-driven "Bustin' Loose"). Still, upon leaving the theater I had a feeling like I just got to know a bunch of kids: some great, some annoying, but all living lives that extend beyond what little I saw of them on the screen. 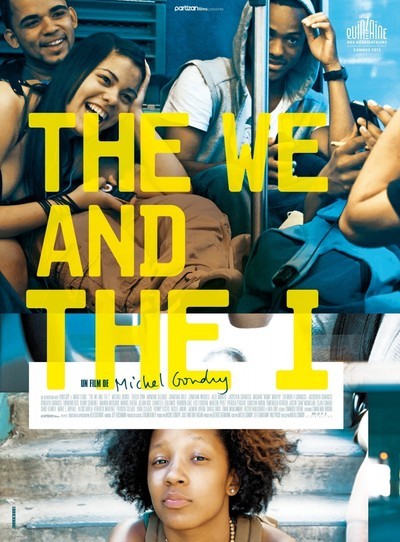