HBO’s latest high-profile mini-series consciously echoes recent hits for the beloved pay cable network. It has the pedigree and even some of the personnel from “Big Little Lies,” mixed with the NY whodunit aspect of “The Night Of,” but it ends up paling in comparison to both. Despite heavy lifting of talents like Nicole Kidman, Hugh Grant, and Donald Sutherland, it simply drifts away from what it should have been, revealing its shallowness more with each passing episode. It’s tempting to say that “The Undoing” would have been stronger as a theatrical thriller because it has closer to 100 minutes of actual plot, but the truth is that it probably would have been just as weak there without the sheen of Prestige TV to attempt to elevate it.

“Big Little Lies” star Nicole Kidman reunites with the writer of that award winner, David E. Kelley, to adapt Jean Hanff Korelitz’s You Should Have Known, the story of a NY murder that unravels the marriage of a wealthy couple. Kidman plays Grace Fraser, and one look at her Manhattan residence makes clear she has generational wealth (although one of the problems here is how little Kelley seems interested in examining how privilege impacts what unfolds). She’s a high-profile couples therapist, and her husband Jonathan (Hugh Grant) is a successful pediatric oncologist. They have a well-adjusted child named Henry (Noah Jupe), and life seems good.

The series premiere, which is easily the best episode, drops a woman named Elena Alves (Matilda De Angelis) into the highly manicured life of Grace Fraser. She meets her at a committee meeting for a school auction, as both of their children attend the prestigious Reardon School. Elena seems oddly interested in Grace, making her uncomfortable, but Grace tries to be kind and helpful. Suddenly, Elena’s bludgeoned body is found in her salon, and it’s revealed that the young mother of two was fascinated with Grace for reasons that will unravel the domestic bliss of the Frasers. From this promising start, “The Undoing” turns into a courtroom whodunit as Grace attempts to determine exactly how much of her life has been a lie.

“The Undoing” has undeniably high production values and a top-notch cast, but they’re in service of increasingly lackluster and inconsistent storytelling. Kidman is typically strong, but the courtroom material often sidelines her as the plot goes through its machinations, and solid work by Grant, Sutherland, and Edgar Ramirez (as the investigating detective) suffers a similar fate, although someone should greenlight a gritty mystery-of-the-week series for Ramirez, who brings a bit of charm to a series that needed a lot more of it.

Everything and everyone here starts to feel like a cog in an increasingly slow machine because Kelley and director Susanne Bier can’t find the momentum to drag this story out to nearly six hours. What’s truly frustrating is that the production doesn’t take this extra time to deepen the characters so much as just repeat plot points and unnaturally drag out scenes. The entire fourth episode could have been five minutes in a superior film, and yet that extra running time doesn’t enrich the character development or even allow for enjoyment of the ensemble. It just treads water.

To be fair, the slow doggie paddle that is “The Undoing” has its moments, most of them courtesy of the ensemble. Sadly, Kidman, who is really one of the best working actresses, isn’t challenged enough by the material here. Grace is far too reactive, facing down new challenges in a way that doesn’t allow Kidman to flex her acting muscles. By virtue of the mysteries surrounding his character, Grant may actually walk away with the series-best performance, although Sutherland, Jupe, and Ramirez are strong too. It’s not a question of the talent of the ensemble, but how little they’re given to do. And the show is incredibly frustrating with its unwillingness to world-build beyond its whodunit story. “Big Little Lies” expanded its focus beyond its core mystery to give characters internal and external lives of their own that are quite simply lacking in “The Undoing.” (And there’s something off about a show that introduces two non-white adult characters only to kill one and make the other a suspect but seems afraid to comment on how race and privilege would impact this story.)

It’s bad enough that "The Undoing" too often feels like a pale copy of what has been done more sharply on HBO before, but it’s a reminder that adult thrillers like this don’t get made in theatrical feature form like they used to—source material like this has become the product of streaming and TV mini-series. Ten years ago, Nicole Kidman and Hugh Grant would have starred in “The Undoing” from Warner Brothers, probably directed by someone like Adrian Lyne or Paul Verhoeven. And while it may not have been as self-serious or made as big of a splash as an HBO mini-series in 2020, it would have been a hell of a lot more fun. 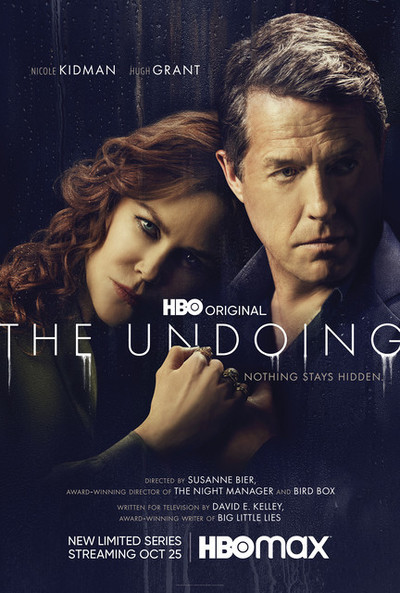