Now that the 2015 summer movie derby is coming to an end this weekend, Jason Statham can be named one of its biggest winners. He entered the season riding high on the mammoth success of "Furious 7," the latest installment of the shockingly durable franchise in which he played the main bad guy. Later on, he appeared in the hit comedy "Spy" and scored many of its biggest laughs by deftly sending up his tough guy screen persona to hilarious effect. Now, with the arrival of "The Transporter Refueled," the latest installment of the action film series from one-man production slate Luc Besson, he seems likely to receive some of the best reviews of his entire career. Of course, he isn't actually in the film at all—the rumor is that he turned it down after being offered a lower salary than his previous go-arounds and no opportunity to read the script beforehand—but once people get a load of this listless retread, they will no doubt fall all over themselves in praising both the earlier ones and his significant contributions to them as a way of underscoring just how useless this one really is.

A brief recap for those of you who some how missed the previous entries and are worried about getting confused. They follow the adventures of Frank Martin, an ex-Special Forces soldier who now resides in the south of France and makes a ridiculously lucrative living as a top-notch getaway driver who is, naturally, the best at his job and, naturally, lives by a certain set of rules that he is always ready to pontificate about at the drop of a hat. (There are fewer rules regarding the care and feeding of the common Mogwai, but never mind.) Since most of his jobs seem to end up with him in the middle of high-speed and high-profile car chases resulting in millions of euros in property damage, one might argue that he is more lucky than skilled but that is a debate for another time.

As our story opens, Frank (now played by Ed Skrein) is about to spend some time with his recently retired father (Ray Stevenson) when he is hired by the super-sexy Anna (Loan Chabanol) to pick her and a couple of packages up outside of a bank. The "packages" turn out to be her equally glam cohorts Gina (Gabriella Wright) and Qiao (Wenxia Yu) and they have just robbed a Russian gangster of millions of dollars. It turns out that the three, along with additional babe Maria (Tatiana Pajkovic), are prostitutes who have decided to break free of Karasov (Radivoje Bukvic), the crime kingpin who has enslaved them since they were children, by stealing the ill-gotten gains of him and his associates through various elaborate means. To do this, they need Frank's help and to ensure his compliance, they take his old man hostage. One could argue that there are worse things that one could do than be taken hostage by a group of high-priced call girls in the south of France but as I would rather not get scolded over at Jezebel, let us table that discussion.

To be honest, this storyline is not noticeably stupider in theory than any of the other "Transporter" films—the characters are as black-and-white as can be, the narrative is little more than a laundry line to connect the action beats and the entire enterprise is noticeably less complicated than the underwear worn by the distaff members of the cast. Actually, I kind of liked those earlier installments, as I enjoy much of Luc Besson's oeuvre, because as cinematic eye candy went, they were of the gourmet variety—the action sequences moved with a combination of grace and giddiness that meshed well with Besson's fondness for salting the carnage with goofball humor. Besson may still have an interest in the franchise—he produced and co-wrote the screenplay—but his connection to the material seems tenuous at best. The story is as dopey as ever but this  installment is mostly bereft of the silly quirks that leavened the others—the story is so boilerplate that one could cook ramen noodles on the screenplay, the dialogue is absolutely terrible (if I started quoting it here, I would never stop) and with one exception  involving our heroes making their escape through an airport terminal, director Camille Delamarre presents all the chases and fights in the kind of overly edited fashion that never allows anyone to get a good look at what is happening for more than a few seconds.

The secret weapon of the previous "Transporter" films, though not always credited as such, was Jason Statham, who turned out to be the ideal center for the chaos surrounding him by giving his tough guy character just the right hint of dry wit to suggest that he knew just how cuckoo the whole enterprise really was. Just as important, his undeniable physical presence lent an extra edge to the fight scenes—here was the rare action star who looked as if he actually could do many of the moves his character was asked to make. I suspect that even he could not have made much of anything out of this film but he almost certainly would have done more with it than Skrein, the man who would be Frank. No matter what he is asked to do—throw punches, race through the streets, trade lines of dialogue—he is never convincing for a second and feels less like an action hero than a placeholder for one who is forthcoming.

"The Transporter Refueled" is an unnecessary bore from start to finish, one that even the most devoted Luc Besson fanatics (and as someone who named "Lucy" as one of the 10 best films of 2014, I admit to falling into that category) will find difficult to defend. However, there is one part of it that I will cherish and that is the scene in which one of the hookers—it hardly matters which one—is shot during one of the escapades and is taken back to the abandoned warehouse with a bullet still lodged inside her. Since they cannot go to the hospital, Frank and his father save her with the use of such oddball elements as sugar, vodka, perfume, tweezers and cobwebs. I have no idea if any of this actually checks out but the next time there is a shootout during a Halloween-themed "Vogue" fashion shoot, it could prove to be a lifesaver. Beyond that, this is a retread of the dullest order—the marquee may say "Transporter" but viewers are likely to come away from it feeling "Taken" instead. 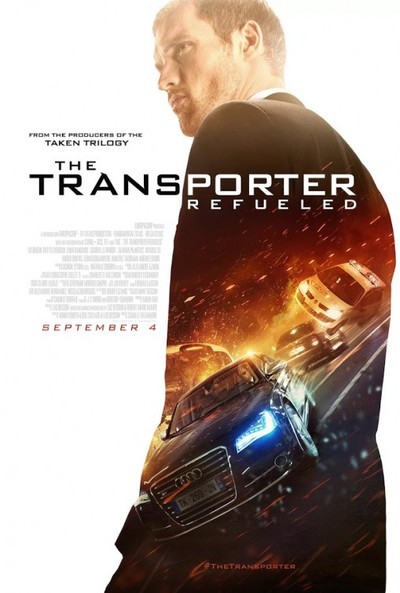 Rated PG-13 for sequences of violence and action, sexual material, some language, a drug reference and thematic elements