It’s unexpected and wonderful to see Hirokazu Kore-eda going through something of a career resurgence after winning the Palme d’Or for his upcoming “Shoplifters.” He’s quite simply one of the most important filmmakers in the world, and it’s so nice to see people talking about discovering his best works after hearing about the recent win—films like “Nobody Knows,” “Still Walking” and “After Life.” Even last year’s “After the Storm” qualifies as top-tier Kore-eda, and the Palme win will likely bring more people to it. In between that excellent movie and “Shoplifters” later this year, we get what could be called a bonus film, the legal procedural “The Third Murder,” which premiered at Venice last year and is getting a limited release this week. This distillation of the difference between law and justice was considered outside of the box for Kore-eda in that most of his films are about family dynamics, but one can still see Kore-eda’s brilliance with character and consideration of the human condition in this drama. It’s not as much of a genre leap if you consider the fact that Kore-eda is much more interested in the people than the specifics of the case.

He makes it clear that this will be a human-driven murder story from the very beginning by showing us the crime. There’s no mystery as to whether or not Misumi (the amazing Kōji Yakusho, most well-known for “13 Assassins” in the States) killed his boss. We see it happen. Misumi strikes him in the back of the head with a hammer and burns the body. This might lead viewers to believe that the film to follow will be about a legal team suckered into helping acquit a guilty man, but that’s not this movie either. Kore-eda is much more interested in how the legal system often can’t hold up when cases get complex and emotionally fraught. It’s about the why of the murder that opens the film and not the who or the how. And it’s the why that’s the hardest for a legal system to take into account.

“The Third Murder” cuts to a famous attorney named Tomoaki Shigemori (the also-amazing Masaharu Fukuyama, who starred in Kore-eda’s “Like Father, Like Son”), who gets the Misumi case after his client has confessed. He killed him for money. He had some gambling debts and needed the cash. Immediately, something doesn’t seem right to Shigemori. The dead man’s wallet smells like gasoline, which means that Misumi took it after burning the body. Why would he do that if the money was his motive? And then Shigemori starts questioning some of the behavior of the people around the case, including the widow who may have had an insurance-driven motive to want her husband dead.

The first hour of “The Third Murder” is a fascinating procedural as the question of motive and some details about the Japanese legal system come to the fore. It turns out that the system is more lenient on grudge-based murder than that done for profit. In other words, if it was for money, Misumi could get the death penalty but wouldn’t if there was another reason for the crime. The question of why hovers in the air for that first hour as we watch Shigemori and his team get to the truth simply by doing their jobs very, very well. I’ve always been drawn to films that capture the process of an important job well done.

The second hour doesn’t work quite as well as Kore-eda drags out the actual courtroom drama out a bit too long. He’s such a precise filmmaker that it’s surprising how bloated some of this part of the film feels, and especially surprising to see the movie get repetitive in terms of plotting and theme. We get what happened and why as Shigemori starts to figure it out but “The Third Murder” mistakenly feels the need to repeat details over and over again to the point that the film loses some of the strength it could have had were it subtler.

What keeps it going even in that second hour is Kore-eda’s work with performers. Fukuyama, also seen recently in John Woo’s “Manhunt,” and Yakusho are both phenomenal here, carrying every scene they’re in as two men who seem to be from very different backgrounds but may have more in common than they think when it comes to the concept of justice. Kore-eda’s films often break down standard institutions—most commonly the varying definitions of the word family—and so “The Third Murder” fits in that aspect of his filmography. It will likely fall through the cracks a bit between “After the Storm” and “Shoplifters,” but it’s worth the time for fans of Kore-eda, a group that seems to be growing every day. 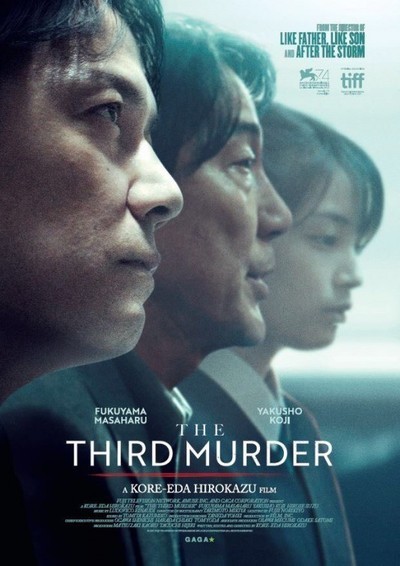