"After all this time, nothing much has changed." These self-conscious, but still incantatory words are the first ones spoken in "Manhunt," Hong Kong action filmmaker John Woo's long-anticipated return to the romantic "Heroic Bloodshed" action-romance films that he pioneered with knock-outs like "A Better Tomorrow," "Hard Boiled," and "The Killer." Woo created his own sub-genre of hyper-sentimental male-oriented weepies, so it's fitting that "Manhunt," his nostalgic retread of those earlier films' tropes, is also a remake of the 1976 Ken Takakura vehicle of the same name. For those who have understandably not seen Takakura's original film due to international distribution issues: think "The Fugitive," only this time, Tommy Lee Jones' gruff cop is replaced by a more sympathetic hot-shot detective.

Woo's exceptionally well-choreographed action scenes prove that he can still deliver what fans have come to expect from him. But "Manhunt" is also defined by the same out-of-time sappiness and melodramatic excesses that have defined Woo’s body of work since "A Better Tomorrow," his definitive breakout hit. So don't call "Manhunt" a comeback: it's got too much of Woo's worse habits to be much more than a bracing trip down memory lane.

Woo’s “Manhunt” begins with a conspicuously overt homage to its 1976 predecessor. Misty-eyed pharmaceutical lawyer Qiu Du (Hanyu Zhang) visits a small Osaka restaurant, where he exchanges dialogue from the Takakura film with welcoming restaurant owners Rain (Ji-won Ha) and Dawn (Angeles Woo). "Everything here reminds me of those film classics,” Du sighs, referring first to Takakura's movie, and then to his own films. This scene—which concludes with an exciting shoot-out between a bunch of unruly yakuza gangsters, and Rain and Dawn (the latter two of whom are now revealed to be a pair of highly trained assassins)—has led some festival-goers to mis-classify "Manhunt" as a "parody" of Woo's signature style. This is a tempting reading, especially since Rain and Dawn are women, and Woo's typical bad-ass protagonists are almost all male. Here, perhaps, is a filmmaker acknowledging, or even sending up his callow youth.

But this moment quickly passes as soon as the film's plot kicks in: Du wakes up the morning after a work-related gala, and finds he has been framed for murder. Good cop Yamura (Masaharu Fukuyama) is hot on Du's trail, but Du refuses to believe that Yamura and his well-meaning, but hapless rookie partner Rika (Nanami Sakuraba) are good people since Du believes the cops are persecuting him. Du and Yamura's initial antagonism speaks to a pet theme for Woo: everybody assumes everyone else is crooked because they all live in a fallen world.

This cynical attitude makes sense since Woo himself grew up in a crime-ridden Chinese slum. But his bad guys often only act maliciously until they realize they’re connected in sentimental ways that re-cast their opponents’ motives in a much kinder light. Tension in Woo’s films often arises from misunderstandings and/or plot twists that set characters against each other, but good people—like Rain and kindly police chief Ito (Naoto Takenaka)—are capable of bad things, while bad people—like hard-hearted Dawn and evil pharmaceutical mogul Sakai (Jun Kimura)—also have their humanizing moments. The trouble is that the bad guys in “Manhunt” are, like many of Woo’s earlier villains, only humanized moments before dying. His women are also still basically emotional crutches for his male heroes' emotional fragility.

There are character-driven moments amidst all of the "Fugitive"-style pyrotechnics, including a very fun jet ski chase and some equally impressive gun-fights. But realistically, Woo’s character is the most clearly defined. The now-older artist has seemingly tried to broaden his stylistic horizons, as in the sturdy two-part war epic "Red Cliff," and the so-so period melodrama "The Crossing." But Woo's tendency of going farther over-the-top than he needs to—with plot twists, stagey performances, clunky jokes, and last-minute reversals of fortune—still grate. Parts of the over-the-top finale of "Manhunt" bring to mind the loosey-goosey, punch-drunk Woo that made "Face/Off," another campy exercise where he tried to go back to his roots after a couple of relatively impersonal projects left him feeling more like a hired gun, and less like an artist. Ironically, "Manhunt" loses momentum whenever its already fast-paced narrative gets a frenetic "Face/Off"-style energy boost from distracting father/son squabbling and a prison break-style sub-plot involving a secret drug lab.

But "Manhunt" generally holds together rather well and is bound to keep Woo's most faithful fans happy. I'm not so sure if the film's thrilling, super-cut-worthy action scenes are good enough for anyone else to wade through, though. And Woo's has out-of-time style been a little unfashionable, particularly because of his sappy belief in a bro-friendly code of honor. But "Manhunt" is a welcome reminder that Woo is still a great filmmaker, one whose more eccentric qualities can also seem kitschy when viewed through an unsparing modern lens. 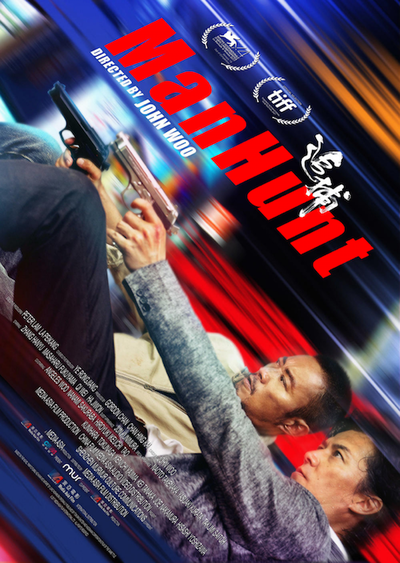