Hirokazu Kore-eda has drawn comparisons to Yasujiro Ozu in the way he’s not as interested in major plot twists or set pieces as he is subtle human emotion, typically hinging on family dynamics. In films like “Nobody Knows,” “After Life” and “Still Walking” (the three best of an incredible career if you’re looking for a place to start), he turns the camera into a window. We look through it and see people a lot like us on the other side, but that empathy never comes through manipulation or cliché. With his latest, the remarkably moving “After the Storm,” he again finds truth and drama in relatable human behavior, and does so by sketching fully-realized, three-dimensional characters. “After the Storm” is about a man unable to live in the present. He is always longing for what he’s lost or dreaming about what he has yet to achieve. And it’s destroying him. We’ve all been there. We’ve all waded in regret and felt skeptical about the future. “After the Storm” is one of our best filmmaker’s best films.

Ryota (Hiroshi Abe) has understandable reasons for his depression. He’s a prize-winning author, but he has yet to follow up on the success of his novel, The Empty Table. He has a job working as a private detective, but it doesn’t seem to bring him much joy—and it’s a profession that plays into Kore-eda’s themes as Ryota is always looking at other people’s lives instead of his own. He’s taken to bringing along his P.I. colleague on surveillance of his ex-wife Kyoko (Yoko Maki), who has a new beau. Even though Ryota has never met the new man in Kyoko’s life, he feels challenged by him, especially when it comes to the attention of his son Shingo (Taiyo Yoshizawa). One night, during a typhoon, Ryota finds himself stuck in his mother’s (the amazing Kirin Kiki) apartment with Shingo and Kyoko. There are no grand revelations or emotional breakdowns, just a series of heartfelt conversations, but the sunlight looks a bit different the next day.

“After the Storm” is as delicately balanced as any film Kore-eda has made, a film that seems to not have much action or momentum but finds cumulative emotional power. Ryota worries about his mother now that his father has passed; he spies on his ex and son; he gambles more than he should—he lives in the past, always talking about his now-broken family, his father, his childhood. And he has a certain victimhood to his tone when he does so, as if life dealt him a bad hand and it’s not his fault. There’s an almost throwaway moment—although Kore-eda’s films are so finely balanced they contain no such thing—in which Ryota and his partner tell a client about a cheating husband, and she doesn’t respond as emotionally as they expect, saying “For better or worse, it’s all part of my life.” It's that comfort with life's speedbumps and the fact that they shape us as much as anything.

Ryota is the kind of guy who gives money to his mother and then asks to borrow some from his sister. He so desperately wants to impress those about whom he cares deeply, and he confuses material goods and cash flow with actual communication and attention. Notice how he doesn’t eat when he takes his son out for a meal—he can’t afford it—and he totally wastes the chance to get to know him by grilling the boy about the new man in his mother’s life. Perfectly directed by Kore-eda, Hiroshi Abe gives one of the best performances in any of his films. He has the perfect hangdog face: unable to make eye contact easily, uncombed hair and unshaven. And yet we can also easily see the good man underneath the weight of life’s problems.

Or perhaps that should be the “imagined” weight of life’s problems. As corny as it sounds, “After the Storm” made me reconsider some of my own insecurities and anxieties. There are so many things in life that have value mostly because of how much we obsess about them, and Kore-eda’s film reminds us that nothing is more important than the moment you are currently in, especially when that moment is spending time with your children. Over the last couple decades, he has been an essential filmmaker when it comes to one of Roger’s most famous quotes—his defining of film as an empathy machine. Few filmmakers know how to work that machine with more finesse and nuance. 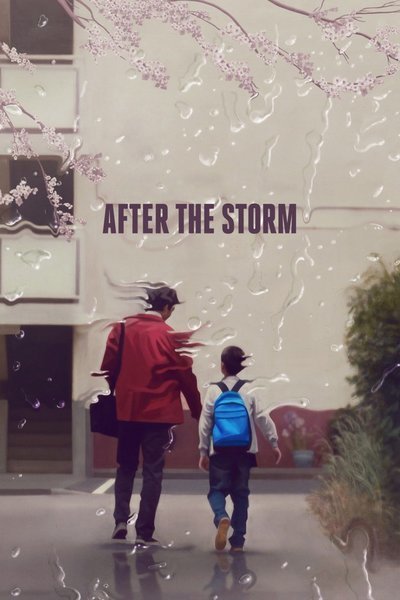