Certain discontents of contemporary Russia get a fascinating, provocative treatment in Kirill Serebrennikov’s “The Student,” the tale of a high school boy who disrupts his school and home as he falls deeper and deeper into religious mania.

In certain moments, the film displays a daring that’s bound to strike some viewers as extraordinarily nervy. In scenes early and late in the story—which obviously reflects a displeasure with the increasing prominence of state-sanctioned religion in Russia—characters make bold statements while standing beneath a portrait of Vladimir Putin, a gesture of stinging commentary that makes you wonder if the filmmaker is not pushing the envelope of what’s permitted in Russian cinema.

The main character’s slide begins innocuously enough. A slender and good-looking if often sullen teen, Venya (Petr Skvortsov) tells his harried single mom (Julia Aug) that he’s gotten in trouble at school for refusing to don a bathing suit and take part in mixed swimming classes. She asks what’s wrong. Is he ashamed of his body? Does he get unwanted erections being close to girls in bikinis? No, he says; it’s against his religion. “What religion?” she scoffs.

But he’s not kidding. At school, he begins declaiming passages from a tattered Bible he carries around with him. Girls showing so much of their bodies incites lust and encourages sin: that’s the problem, he avers. Interestingly, his arguments aren’t dismissed out of hand by everyone. While young teacher Elena (Viktoriya Isakova), evidently the faculty’s most liberal member, rolls her eyes at Venya’s crusade, the principal (Svetlana Bragarnik) muses that maybe teen girls wearing bikinis is too provocative. Perhaps they should wear less revealing bathing suits.

As this might suggest, one of the strongest aspects of “The Student” is that, while its view of Venya’s beliefs is decidedly skeptical, it doesn’t ridicule him or suggest that others are immune to his Biblical zealotry. As he becomes more vocal, he gains one disciple. A crippled boy named Grigory (Aleksandr Gorchilin), who’s taunted and abused by the other kids, accepts Venya’s friendship and allows him to try some spiritual healing on him. He also develops a crush that will become very problematic.

Though everything Venya proclaims is offered with Bible quotes to back it up, his faith is clearly of his own making, and of a stronger potency than more conventional varieties. When an Orthodox priest tries to engage him in dialogue, the boy shows his fierce contempt for forms of faith less ferocious and uncompromising than his own.

But his greatest opponent is Elena, who develops a mild form of mania herself when Venya’s challenges prod her to spend most of her spare time reading up on Christianity in order to refute his arguments. And it’s her biology class that enrages him most. When she teaches that homosexuality is a natural expression of sexuality, and tries to demonstrate the use of condoms with carrots, he strips naked and storms through the classroom ranting against her until the principal runs in to stop the commotion.

When the subject is evolution, Venya stages his classroom rampage dressed in a gorilla suit—shades of “Toni Erdmann”—and scores a victory of sorts when the principal, intervening yet again, wonders if the school perhaps should teach the Biblical account of creation alongside Darwin’s ideas.

Elena remains commendably sanguine through many such insults to reason—until she explodes under that portrait of Putin that all this servile Father worship will inevitably lead to a “totalitarian dictatorship”—but her defenses of homosexuality, feminism and evolution are not finally what light Venya’s fuse. It’s when he discovers that she’s Jewish that he decides she must be stopped, and the deep ugliness of his crusade becomes undeniable as well as physically dangerous.

Though it has elements of satire and moments of comedy, “The Student”—which, at two hours, could stand to be a bit shorter—is a serious, sharply mounted drama that gets more engrossing as it moves along. Serebrennikov’s writing is smart and flavorful, and he gets terrific performances from his cast (the older actors are all Russian screen stars). The director also has a very distinctive style, using extended takes and fluid handheld camerawork that makes the most of Vladislav Opelyants’ attractively naturalistic photography. In all, the film may be the strongest piece of Russian cinema to reach the U.S. since “Leviathan” two years ago. 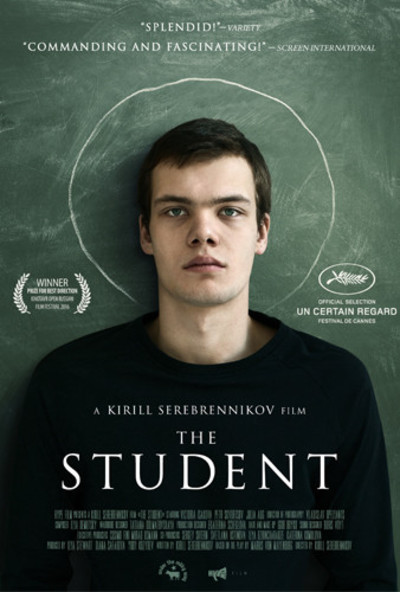