"The Spirit" is mannered to the point of madness. There is not a trace of human emotion in it. To call the characters cardboard is to insult a useful packing material. The movie is all style -- style without substance, style whirling in a senseless void. The film's hero is an ex-cop reincarnated as an immortal enforcer; for all the personality he exhibits, we would welcome Elmer Fudd.

The movie was written, directed and fabricated largely on computers by Frank Miller, whose "300" and "Sin City" showed a similar elevation of the graphic novel into fantastical style shows. But they had characters, stories, a sense of fun. "The Spirit" is all setups and posing, muscles and cleavage, hats and ruby lips, nasty wounds and snarly dialogue, and males and females who relate to one another like participants in a blood oath.

The Spirit (Gabriel Macht) narrates his own story with all the introspection of a pro wrestler describing his packaging. The Octopus (Samuel L. Jackson) heroically overacts, devouring the scenery as if following instructions from Gladstone, the British prime minister who attributed his success to chewing each bite 32 times.

The Spirit encounters a childhood girlfriend, Sand Saref (Eva Mendes), pronounced like the typographical attribute, who made good on her vow of blowing off Central City and making diamonds her best friend. The Octopus has an enigmatic collaborator named Silken Floss (Scarlett Johansson), pronounced like your dentist.

These people come and go in a dank, desolate city, where always it's winter and no one's in love, and their duty is to engage in impossible combat with no outcome, because The Octopus and The Spirit apparently cannot slay each other, for reasons we know in a certainty approaching dread will be explained with a melodramatic, insane flashback. In one battle in a muddy pond, they pound each other with porcelain commodes and rusty anchors, and The Spirit hits The Octopus in the face as hard as he can 21 times. Then they get on with the movie.

The Octopus later finds it necessary to bind The Spirit to a chair so that his body can be sliced into butcher's cuts and mailed to far-off ZIP codes. To supervise this task, he stands in front of a swastika, attired in full Nazi fetishwear, whether because he is a Nazi or just likes to dress up, I am not sure. A monocle appears in his eye. Since he doesn't wear it in any other scene, I assume it is in homage to Erich von Stroheim, who wasn't a Nazi but played one in the movies.

The objective of Sand Saref is to obtain a precious vial containing the blood of Heracles or Hercules; she alternates freely between the Greek and Roman names. This blood will confer immortality. Fat lot of good it did for Heracles or Hercules. Still, maybe there's something to it. At one point, The Spirit takes three bullets in the forehead, leans forward and shakes them out. At another, he is skewered by a broadsword. Why, oh why, does he never die, he asks himself. And we ask it of him.

I know I will be pilloried if I dare end this review without mentioning the name of the artist who created the original comic books. I would hate for that to happen. Will Eisner. 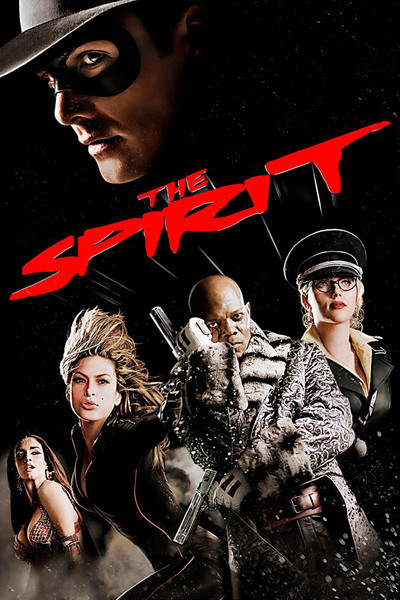 Gabriel Macht as The Spirit

Paz Vega as Plaster of Paris

Samuel L. Jackson as The Octopus