I am a grown woman who has played a Facebook version of Angry Birds since its inception. Judge me if you must, but suddenly that wasted time has come in somewhat handy now that the inevitable “The Angry Birds Movie” has landed.

I compete against strangers in weekly tournaments by launching flightless birds of varying shapes, hues and special combative powers via a slingshot and aiming them at snorty green pigs. If you asked me which one is my favorite bird, I would pick Bomb (voiced by Danny McBride in the film) because, you know, explosions. And I become an angry lady whenever my ranking slips from the gold league to silver.

Do I care if the birds have personalities or backstories? Not really. I just want these furious fowl to smash into the obnoxious little green porkers while racking up a big score. It’s a very shallow relationship but probably the longest one I have had with a game since I spent an entire summer trying to beat my friend Angela at lawn darts.

“The Angry Birds Movie” isn’t a total turkey. The animation itself is OK and I did laugh out loud once when a poem written by Bomb rhymed “hate” with “detonate.” But it sure has a surfeit of derivative stuffing amid all the frantic chaos in an attempt to distract from the fact that there isn’t much that's inventive or even funny here. Instead of simply catapulting myriad puns, bathroom-related jokes and a hodgepodge of soundtrack songs (a Limp Bizkit cover of The Who’s somber “Behind Blue Eyes” and Tone-Loc’s sexy “Wild Thing” alongside Demi Lovato’s sprightly rendition of “I Will Survive” and a brand-new Blake Shelton hoedown number) onto the screen, the makers of this glorified promotion for a phone app should have followed the “let’s-go-crazy” model set forth by “The Lego Movie.”

Instead of elevating the Angry Birds concept to surreal heights of insane genius, the filmmakers settle for a tale bogged down by familiar themes plucked from much better films. In the Scrat-inspired opening, our hero Red (Jason Sudeikis, speaking for the game’s most ineffectual pig attacker) races through a jungle on Bird Island carrying an egg-shaped object that holds a cake while encountering obstacles that inflict bodily abuse. Turns out he is a party clown for hire with a short fuse who misses a deadline for delivering the “hatchday” treat. He gets violently mad when his customers aren’t pleased and the law gets involved, sentencing him to—you guessed it—an anger management class.

It’s there where he meets Bomb and Chuck, a speedy big-beak yellow bird (Josh Gad aka Olaf the Snowman from “Frozen”), and Terence, the game’s rotund red bird who mainly elicits guttural responses in the manner of Lurch from “The Addams Family” TV show. That this round mound of moroseness is voiced by an actor with a rep for hot-headed outbursts—Sean Penn—is as clever as “The Angry Bird Movie” gets. We also meet the token lead female character, the game’s butt-bombing white bird known as Matilda (Maya Rudolph), a calm Zen-like instructor who will eventually summon her inner warrior.

Meanwhile, we learn that Red was subjected to cruel mockery as a child, much of it aimed at his Eugene Levy-size bushy black brows. His downbeat attitude doesn’t help him fit in with the cheery flock of fellow island dwellers, who shun him as an outsider. His skepticism reaches new heights when a pair of pigs, the smooth-talking Leonard (Bill Hader) and his piglet-size sidekick Ross (Tony Hale), arrives in a pirate-like boat. While the other birds buy into the porcine intruders’ offer of friendship, Red goes into Chicken Little mode as he realizes the pigs want to kidnap their eggs—in other words, their children. But everyone else is having too much fun partying down with the intruders to notice.

That is a rather grave premise to stick into the middle of a movie aimed at youngsters. But perhaps even more concerning is a comic lowlight involving a washed-up mythic figure and one-time hero known as Mighty Eagle (Peter Dinklage). He’s a “Wizard of Oz” type whose rep for greatness is currently undeserved. His most memorable contribution: a rather off-putting depiction of the aged bird relieving himself for what seems to be an eternity into a lake where Bomb and Chuck have just been frolicking, much to their disgust.

The finale results in a free-for-all that basically emulates the actual game in frenetic fashion. But the real assault is the number of lame wordplay gags aimed at the audience. When a fish attaches himself to Red’s behind, he issues this insult: “Bottom feeder.” When an endless line of hatchlings fill up a crosswalk and block Red’s way, his response is, “Have you ever thought of bird control?” Then there are the jokes that pop up in passing: A poster for Kevin Bacon in “Hamlet,” a book titled “50 Shades of Green,” a ham radio, a sign for “free-rage chicken,” a pig version of the twin girls from “The Shining” and the all-too-expected “Green Ham and Eggs” reference as well as a side mention of Jon Hamm.

However, “The Angry Birds Movie” did leave me wondering if something deeper was implied as the birds are eventually won over by Red and adopt his get-mad stance as they finally fight back. Is the film attempting to do to anger what “Inside Out” did for sadness? In other words, legitimize the emotion for children? Maybe, especially when a scene materialized at the end that suggested a sequel is possible. Now that really fires up my ire. 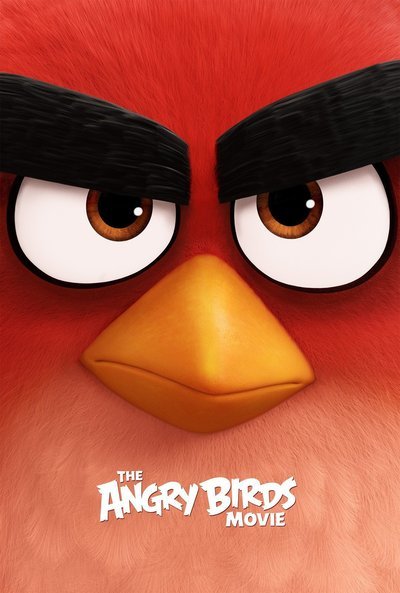