At the beginning of "The Right Stuff," a cowboy reins in his horse and regards a strange sight in the middle of the desert: the X-1 rocket plane, built to break the sound barrier. At the end of the film, the seven Mercury astronauts are cheered in the Houston Astrodome at a Texas barbecue thrown by Lyndon B. Johnson. The contrast between those two images, contains the message of "The Right Stuff," I think, and the message is that Americans still have the right stuff, but we've changed our idea of what it is.

The original American heroes were loners. The cowboy is the perfect example. He was silhouetted against the horizon and he rode into town by himself and if he had a sidekick, the sidekick's job was to admire him. The new American heroes are team players. No wonder Westerns aren't made anymore; cowboys don't play on teams.

The cowboy at the beginning of "The Right Stuff" is Chuck Yeager, the legendary lone-wolf test pilot who survived the horrifying death rate among early test pilots (more than 60 were killed in a single month) and did fly the X-1 faster than the speed of sound. The movie begins with that victory, and then moves on another 10 years to the day when the Russians sent up Sputnik, and the Eisenhower administration hustled to get back into the space race.

The astronauts who eventually rode the first Mercury capsules into space may not have been that much different from Chuck Yeager. As they're portrayed in the movie, anyway, Gus Grissom, Scott Carpenter and Gordon Cooper seem to have some of the same stuff as Yeager. But the astronauts were more than pilots; they were a public-relations image, and the movie shows sincere, smooth-talking John Glenn becoming their unofficial spokesman. The X-1 flew in secrecy, but the Mercury flights were telecast, and we were entering a whole new era, the selling of space.

There was a lot going on, and there's a lot going on in the movie, too. "The Right Stuff" is an adventure film, a special effects film, a social commentary and a satire. That the writer-director, Philip Kaufman, is able to get so much into a little more than three hours is impressive. That he also has organized this material into one of the best recent American movies is astonishing. "The Right Stuff" gives itself the freedom to move around in moods and styles, from a broadly based lampoon of government functionaries to Yeager's spare, taciturn manner and Glenn's wonderment at the sights outside his capsule window.

"The Right Stuff" is likely to be a landmark movie in a lot of careers. It announces Kaufman's arrival in the ranks of major directors. It contains uniformly interesting performances by a whole list of unknown or little-known actors, including Ed Harris (Glenn), Scott Glenn (Alan Shepard), Fred Ward (Grissom) and Dennis Quaid (Cooper). It confirms the strong and sometimes almost mystical screen presence of playwright Sam Shepard, who plays Yeager. And it joins a short list of recent American movies that might be called experimental epics: movies that have an ambitious reach through time and subject matter, that spend freely for locations or special effects, but that consider each scene as intently as an art film. "The Right Stuff" goes on that list with "The Godfather," "Nashville," "Apocalypse Now" and maybe "Patton" and "Close Encounters of the Third Kind." It's a great film. 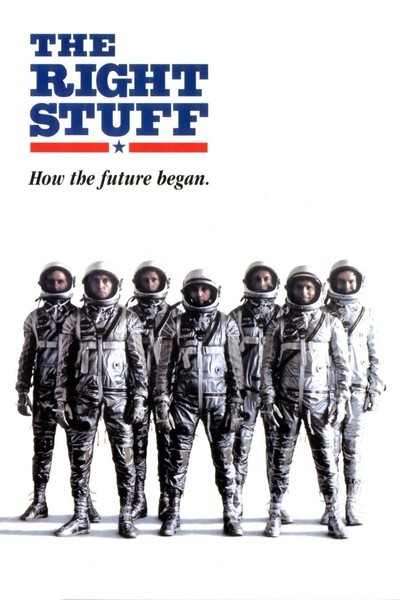