Netflix's "The Prom" is billed as a musical comedy because people sing in it while making funny faces, but beyond that, the relative levels of comedy and musicality ought to be subjects of debate.

Directed by Ryan Murphy—whose long-running series "Glee" was mostly half-assed, but occasionally sublime—this Netflix movie focuses on three Broadway stars: Dee Dee Allen (Meryl Streep), a diva belter in the spirit of Patti LuPone; Barry Glickman (James Corden), a comedy sidekick-type with a touch of Nathan Lane's manic-depressive energy; and (yes, this is her name) Angie Dickinson (Nicole Kidman), who echoes Bernadette Peters' uncanny ability to continue playing kewpie-doll-adorable lead parts even though she should've theoretically aged out of them. Dee Dee and Barry just appeared in a new musical about the Roosevelts that closed after opening night, following weak advance sales and harsh reviews.

They need to find a new energy source to feed their narcissism, so they seize on a controversy in a small, conservative Indiana town, where a lesbian teen (Jo Ellen Pellman) has been denied the right to take her sweetheart Alyssa Greene (Ariana DeBose) to the prom. A Sardi's bartender and recent Juilliard graduate named Trent Oliver (Andrew Rannells) tells the Broadway trio that if they're hell-bent on getting in the middle of the prom situation and dusting it with their limousine liberal magic, they can hop on the bus that's about to take him through Indiana as part of a non-Equity tour of Godspell. Free transportation!

This is a promising setup, and you can see how audiences might've adored the stage incarnations. The movie hits pleasure spots for devoted theatergoers, mixing self-deprecating observations about how fatuous and self-serving performers can get when they dabble in politics; a dash of "The Magic of Theater" messaging that congratulates ticket-buyers for making a contribution to a cultural institution; and an earned but sometimes irritating strain of self-satisfaction, mainly having to do with theater's ability to help ostracized individuals in reactionary small towns get the hell out and finally be themselves without constant fear of censure or worse. The songs are mostly serviceable, but there are enough home runs (including Emma's soul-centering, meditative song "Just Breathe") to carry viewers over the rough spots.

Corden, as is so often the case, succeeds mainly by holding his own in the same frame as powerhouse performers like Streep and Rannells. Despite her occasional forays into singing roles, Kidman also falls into the just-OK category, and is much better during non-singing scenes where she's vamping and being blowsy and minx-like.

Streep has played this sort of part before so many times (with and without songs) that she could do it in her sleep, and there are moments where she's seems so tuned into her autopilot tendencies that you wouldn't be surprised if she nodded off. She really only comes to life and shows us new shadings when she's flirting with the school principal (Keegan Michael Key), who sympathizes with Emmy and is an unabashed Broadway obsessive who's been crazy about Dee Dee every since he saw her star-making turn in a musical from early in her career.

Murphy's direction is in "Glee" mode, though with less frantic editing than was the norm on that series. The blocking, framing, and camera movement give us a good look at the performers, often from head-to-toe, and he pulls off a couple of dandy flourishes (including some overhead views) but there's nothing here that you wouldn't expect to have seen in a Disney Channel musical made 20 years ago. Which is where "The Prom" might've seemed most at home, truth be told.

In theaters now and on Netflix this Friday, December 11th. 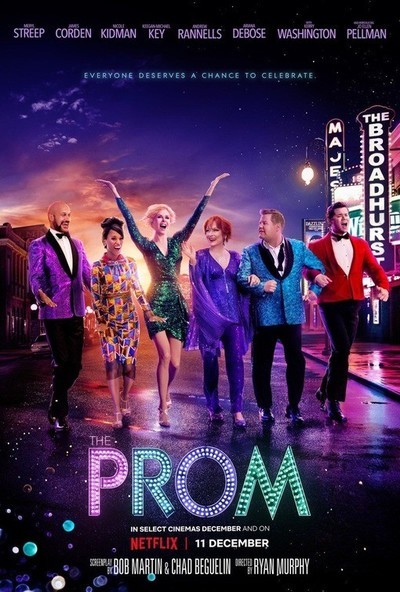