A voice in the dark

The storyteller is going through a rough passage. He can't seem to write, or to record his radio show, called "Noone at Night." His boyfriend has just moved out because he "needs more space." And then a colleague gives him an autobiographical manuscript, written by a 14-year-old boy, detailing years of ritualistic sexual abuse in the basement of his family house. The kid's parents, and their friends, were the abusers.

That's the shocking wake-up call that begins to rouse Gabriel Noone (Robin Williams) from his funk. Turns out, Pete (Rory Culkin) is an admirer of his radio show, and the two strike up a telephone friendship. But disembodied voices leave a lot to the imagination. What does the boy really want from Gabe? And, equally mysterious (perhaps even to Gabe), what does he want from the boy?

An atmospheric Hitchcockian thriller (more "Vertigo" than "Psycho"), featuring some of Williams' subtlest work as an actor, "The Night Listener" is supposedly inspired by something that actually happened to its screenwriter, Armistead Maupin, author of the addictive "Tales of the City" stories and the novel on which this movie is based. I don't know how much of it is true, but the movie makes this twisted tale believable, moment by moment.

The original PBS miniseries based on "Tales of the City" openly drew upon Hitchcock -- appropriately since it was set in San Francisco, land of "Vertigo." "The Night Listener" plays with "Vertigo" themes and imagery, too. By invoking "Vertigo," the movie tells us how we should watch it: At any given moment, we're seeing only fragments of the whole picture. So, is anybody really who he or she seems to be?

That's one of the best things about "The Night Listener": You can never pigeonhole anybody (at least not for long). It's a film about people with mixed motivations (maybe even compulsions), who don't always behave with full self-awareness or self-control.

Like all relationships, the one that develops between Gabe and Pete (and, in another respect, between Gabe and the boy's adoptive mother Donna, played with the usual note-perfect nuances by Toni Collette) is symbiotic. Pete is getting a mentor, and perhaps some extra publicity for his soon-to-be-published book. Gabe is getting a distraction from his woes, and some reassurance that maybe he's not really such a bad guy.

"The Night Listener" is dark and muted in tone. It begins in a radio studio with Gabe's hushed, hypnotic voice. Rarely do the characters raise their voices above a conversational level -- and in a late scene where Gabe finally cuts loose with a tantrum, we see his outburst through a window from the darkness outside without hearing it.

Williams has worked hard at becoming an actor in the past few years, and it's paying off. His screen persona had become insufferable, either "love-me!" mawkish ("Moscow on the Hudson," "Dead Poets Society") or "look-at-me!" attention-starved ("Good Morning, Vietnam," "Mrs. Doubtfire") -- or both ("Patch Adams"). He'd reached the point of being unwatchable, but then slowly began re-inventing himself as a performer. He learned how to be creepy ("Insomnia," "One Hour Photo") intentionally, in ways that served the material. And he disciplined himself not to rely on manic energy alone.

Williams was funny in "The Birdcage," but at last he seems to understand that a performance pitched at that cartoon level isn't always good for every movie. Gabe may be full of self-pity, but he doesn't display his neediness to the movie audience. And he may be gay, but he isn't a caricature. "The Night Listener" is mostly about Gabe, but it's not mostly about Robin Williams playing Gabe, and that's a welcome relief. 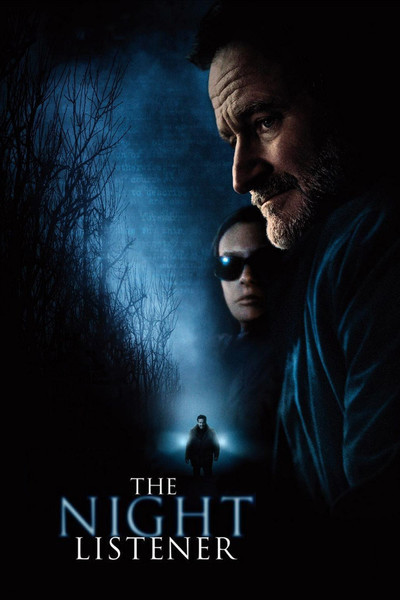 Rated R for language and some disquieting sexual content

Robin Williams as Gabriel Noone