The Lego Movie 2: The Second Part

Here’s the thing: No sequel could ever match the ingenuity and infectious energy of “The LEGO Movie.” The 2014 animated extravaganza exceeded all of its aesthetic and narrative ambitions. It was full of big ideas and minute details. It made you laugh and cry. It was, in a word, awesome.

Five years later—with a couple of spin-offs in between—we have “The LEGO Movie 2: The Second Part.” And while it’s a lot of fun, it isn’t as consistently clever or thrilling as its predecessor. All the components are certainly there: Phil Lord and Christopher Miller, the masterminds behind the original movie, are back this time as screenwriters, while Mike Mitchell (“Shrek Ever After,” “Trolls”) has taken over directing duties. There are more wildly entertaining and insanely catchy songs than ever, including the aptly titled “Catchy Song,” which will indeed get stuck inside your head. And most of the lively voice cast from first film has returned—led by Chris Pratt, Elizabeth Banks, Will Arnett and Alison Brie – alongside some welcome new additions, most notably the scene-grabbing Tiffany Haddish.

But something’s just missing here—a crucial piece, if you will, that keeps the whole set from snapping together. Maybe it’s a lack of novelty, pure and simple. But more fundamentally, the revelation at the end of the first “LEGO Movie”—that the entire story was the manifestation of a little boy’s imagination in his basement—is a given here from the beginning. That culminating twist was downright profound back then. This time, we know from the start that certain LEGO creations are the work of that slightly older boy, Finn (played once again by Jadon Sand), and others are the creations of his pesky little sister (“The Florida Project” star Brooklynn Prince). The conflict between them is rendered in animated form, but live-action reality creeps in from time to time.

Still, “The LEGO Movie 2” quickly grabs you with its startling depiction of what’s happened in the five years since we last visited Bricksburg, the sunny, colorful place that industrious everyman Emmet (Pratt), rebellious Lucy/Wyldstyle (Banks), high-strung Unikitty (Brie) and the rest of the characters called home. It literally has devolved into a dystopian wasteland, now known as Apocalypseburg, with a healthy wink and nod to the bleak look and feel of “Mad Max: Fury Road.” (As in the first “LEGO Movie,” much of the fun here comes from catching all the fast and furious pop culture references. Arnett’s LEGO Batman is at the center of an entire hilarious song that analyzes the many cinematic incarnations of the Caped Crusader, for example. Once again, you could not possibly catch all the meta gags in one sitting, but you also probably won’t mind repeated viewings.)

Emmet, however, remains his perky, optimistic self. Efforts to be edgy and moody to impress the badass Lucy are adorably futile. But he finds a real opportunity to prove his worth when Apocalypseburg becomes the target of an invasion by seemingly benign but secretly evil LEGO Duplo creatures from outer space. (We caught a glimpse of these shiny, squeaky characters at the very end of the first “LEGO Movie.”) It’s clear what these larger, simpler blocks represent in the real world; the challenge is finding novel ways to reflect that sibling rivalry in inspired, animated fashion as the action shifts to a glittery, rainbow-hued locale known as the Systar System.

Bits of dialogue are mostly zippy, but Mitchell’s overall pacing drags at times and there’s a repetitious nature to the adventures. And some of the bits just do not land, such as the one involving a LEGO banana that keeps tripping over its own peel. It’s not all that funny the first time, much less several times. Meanwhile, other self-aware jokes are good for big, consistent laughs; besides Arnett’s Batman song, the movie features an extended riff on Pratt’s various other blockbuster performances in the form of a swaggering character named Rex Dangervest. (Rex’s army of velociraptors, who communicate through subtitles, are giddy fun.)

And the film’s feminist streak is certainly welcome, especially given the propensity for big-studio franchises like this to focus on the heroism of their male characters. “The LEGO Movie 2” features a biting exchange in which Lucy acknowledges that she did all the real work in the first film, while Emmet got to bask in all the glory as “The Special.” And Haddish’s character, the shapeshifting Duplo Queen Watevra Wa’Nabi, exists to upend expectations of what villains typically look like and seek.

While these pleasures and insights may not be as overwhelming as they were the first time around, the songs remain a total treat. “The LEGO Movie 2” is actually more of a musical than the original – knowingly so, of course—and it saves the best for last. Once again, you’re going to want to stay through the closing credits to experience a joyous and playful tune about … the greatness of the closing credits. “Super Cool,” featuring Beck, Robyn and the Lonely Island guys, is a genuine expression of appreciation for the hard work that goes into putting all the pieces into place. And it is awesomely catchy. 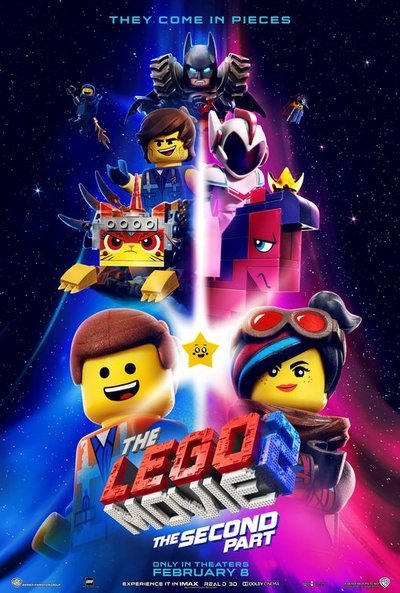 Rated PG for some rude humor.

Will Forte as Abraham Lincoln (voice)