"The Layover" is a slapstick comedy about two women who have the hots for the same guy. Alternately sentimental and raunchy, it wants to be another "Bridesmaids," but settles for being one of those not-entirely-terrible movies that you leave on the TV because you're too tired to get up and find the remote so that you can change the channel.

Alexandra D'Addario plays Kate, a nicey-nice schoolteacher whose job is in jeopardy (probably because she's not very good at it). Kate Upton plays Meg, her best friend, aka The Wilder One; the first time we meet her, she's trying to sell imported North Korean cosmetics, and as the film goes on, she consistently acts as the troublemaker, though Kate catches up soon enough.

The women decide to escape their troubles by taking a holiday vacation to the tropics, but when their plane is diverted to St. Louis, Missouri following a hurricane advisory, they become enamored with a dude who sat between them on the flight. His name is Ryan (Matt Barr). He's got long blond hair and a neatly trimmed beard, killer abs and a superhero chest, and his voice sounds a little bit like George Clooney's. Virtually the instant Ryan enters Kate and Meg's orbit, his very presence drives them into a spiral of brain-dead, sometimes vicious one-upsmanship.

Their nonstop competition for a beefcake prize continues until a third-act plot twist sends the story in a different direction. Of course by the end the friends must realize that their bond is more important than any man. In the meantime, we get treated to an array of slapstick setpieces, including an impromptu diving competition at a hotel pool that features the movie's only genuinely terrific visual punchline, and a scene involving The Filthiest Toilet in Missouri that ends up being merely disgusting. Molly Shannon, Rob Corddry, and Kal Penn are wasted in small roles. Penn's is borderline insulting: after anchoring three "Harold and Kumar" films, he's stuck playing a hotel manager who's confined to a couple of scenes. The script doesn't even have the courtesy to give him something interesting to do. I could have played his role, and I'm a terrible actor.

The lead actresses are game for anything and knockout-gorgeous, in ways that stretch credulity sometimes—the diving scene puts D'Addario in a bathing suit that could've been on the cover of Sports Illustrated, confirming that she's one of those schoolteachers who eats nothing but fish and rice and spends two hours a day at the gym. Barr is eye candy as well, though his part is underwritten at first and contrived near the end of the story. There are too many moments when you might catch yourself imagining the same material with ace comic performers in the roles (Kristen Wiig and Anna Faris, for instance).

Upton in particular seems a case of settling for the actor you can get instead of casting the actor you need. She isn't explosively incorrect enough to provide the incandescent spark this character requires. Meg and Kate's relationship is a "reasonable one/dangerous one" pairing. The dangerous one needs to seem truly dangerous, a creature of pure narcissism and hunger, though with a core of sweetness that explains why Kate puts up with her. Upton's Meg merely comes across as tediously self-absorbed and oblivious—the kind of woman you'd immediately diagnose as a pill if you met her at a party, then avoid for the rest of the night.

Matt Jones ("NCIS," "Found"), who plays a hotel guest who gets pulled into Meg, Kate and Ryan's melodrama, is the only actor who seems to have a life apart from the weak situations he's required to enact. He's the heart and conscience of the film. That and a buck fifty will get you a cup of coffee.

In fairness, David Hornsby and Lance Krall's screenplay and William H. Macy's direction (yes, really—that William H. Macy) don't do the actors any favors. Except for maybe a half-dozen shots, Macy treats the camera as a recording device, even though the writing and acting are rarely notable enough to be worth preserving. The lead characters don't have enough psychological meat to convince us that they'd toss a lifelong friendship in the garbage because a great-looking guy came into the picture. There are intriguing throwaway lines here and there—"Not this time," Kate says to Meg in a hotel hallway, suggesting that her friend has stolen guys from her in the past—but these aren't developed in a way that might amplify the slapstick and make the mandatory reconciliation-with-lessons-learned moment feel improbably moving, as it should be in a film of this type. (The third act makes hash of the competition anyway, which is irritating.)

Maybe the heart of the problem is that Kate and Meg's behavior doesn't track with the practical realities of lifelong, functioning friendship between (most) women as experienced by...well, any functioning adult who lives in the world. This story would be more convincing with the genders flipped: two male nerds impulsively damage a lifelong bond after a pretty woman sits between them on a plane and, for one shining moment, makes them feel desirable, too. 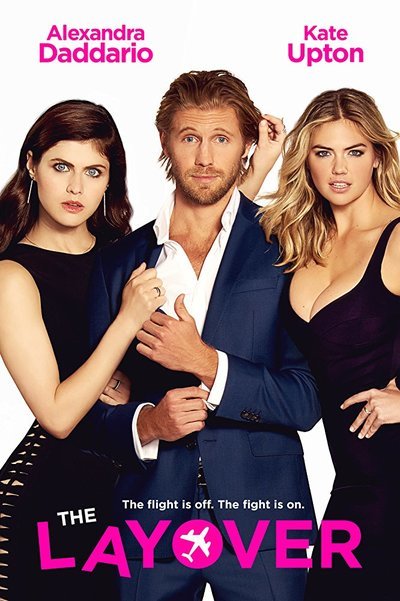 Rated R for language throughout, sexual content and some drug material.