If you’re going to shamelessly rip-off from a classic most of us have seen, at least make it interesting. Andy Newbery’s “The Host” riffs off of two horror movies many might recognize, Alfred Hitchcock’s “Psycho” and to a lesser extent, Eli Roth’s “Hostel.” However, the unholy mix of the two did not pack enough suspense to keep this viewer guessing or vary enough for me to stop thinking about the parallels. For a tale of mystery and intrigue, “The Host” provided neither.

Our lackluster beginnings start with a couple in London at the end of their affair. Heartbroken and frustrated, Robert (Mike Beckingham) returns to his work at a bank and takes off an off-the-books deposit of several thousands of pounds to try his luck at a shady upscale gambling spot. After his streak of bad luck continues, he’s forced on a mysterious errand to Amsterdam with a briefcase marked with a Chinese gang sign. Robert finds more trouble ahead when he meets Vera (Maryam Hassouni), another suspicious character with a secret gruesome hobby. When Robert goes missing, it’s up to his brother, Steve (Dougie Poynter), to find out what happened to him. Usually, I’m a bit less forthcoming about spoilers in reviews, but the plot points are so well-known, I feel that I must mention them.

If you’re already spotting the similarities, there are many. From the Saul Bass-inspired opening credits, the movie closely follows the trajectory of “Psycho” with a queasy addition of a stereotypical Chinese drug smuggling subplot shoehorned in for some reason—like copyrights. “The Host” even goes so far as to lose the main character about a one-third of the way into the movie, something Hitchcock did in “Psycho” that shocked audiences back in 1960. But this is 2020, so even the most casual of horror fans could likely connect the two movies.

On a basic level, “The Host” functions as a gender-swapped adaptation of “Psycho.” Robert is essentially Janet Leigh’s character, Marion, and Vera is a rich femme fatale reboot of Anthony Perkins’ Norman Bates, right down to the part where she takes Robert in as an unexpected guest and talks to the corpse of a dead parent. Her bad habit of chopping up guests shares some similarities to the Dutch businessman of “Hostel,” including the commentary on how the rich get away with murder and wanton cruelty. If the references weren’t clear enough, her basement morgue shares the same grimy shade of green and blinking fluorescent lights as some of the “Saw” movies. “The Host” only briefly veers into torture and gore before returning to the “Psycho”-inspired mystery.

The issue is not so much that Newbery so closely traces a few of his favorite filmmakers. It’s that he doesn’t do a very good job of making the material his own. A number of the scenes feel flat, and the images of cinematographer Oona Menges look like an unremarkable TV movie, like when a visit to a police station looks as if only one cop is seated in an empty room. The script shares three screenwriters—Finola Geraghty, Brendan Bishop and Laurence Lamers—yet the dialogue and plot sound like it’s still in the draft stages. There are some obvious coincidences and plot holes that made me groan, like how one of the characters knew just where to look for the ground-up bodies of victims, taking out any possibility of suspense. The cast seems like they’re still in rehearsal, figuring out the lines and natural rhythms, but these are the takes Newbery chooses to keep in the movie. This is especially painful in moments like a relative of Vera is shown a photo of the corpse she’s kept in the house and he reacts with the energy of someone checking the weather.

For this movie to surprise you, you almost need to have never seen a horror movie before. There are simply not enough thrills in “The Host” to offset its pedestrian missteps. It’s fine if a filmmaker wants to pay homage to their creative inspirations—directors as varied as Mel Brooks, Quentin Tarantino and even Brian De Palma have made careers out of referencing other filmmakers—but at some point, a movie has to stand outside of the shadows of its influences. The Host” never does. 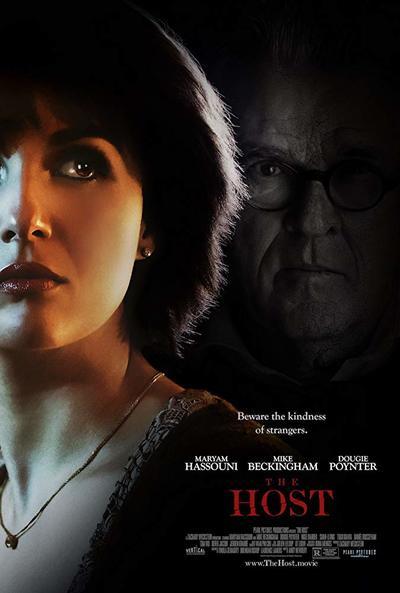 Rated R for some bloody violence, sexuality and language.

Writer (based on a story by)