"Without promotion, something terrible happens...nothing!" - attributed to Phineas Taylor Barnum

"The Greatest Showman," directed with verve and panache by Michael Gracey, is an unabashed piece of pure entertainment, punctuated by 11 memorable songs composed by Oscar- and Tony-winning duo Benj Pasek and Justin Paul, who composed the songs for "La La Land," as well as the current Broadway hit Dear Evan Hansen. The film is made for the whole family to enjoy, and so it leaves out many of the darker elements (explored in the 1980 Broadway musical Barnum, music by Cy Coleman). This is a difficult tightrope to walk, but credit is due to Gracey, a perfectly cast Hugh Jackman, and the entire cast, who play this story in the spirit in which it was written (by Jenny Bicks and Bill Condon). "The Greatest Showman" positions itself as a story celebrating diversity, and the importance of embracing all kinds.

There are those who will see this as a rose-colored-glasses view of what was a pretty exploitive situation. But in a 19th and early 20th century context, the circus and then vaudeville were welcoming places where those who had skills or who were rejected by society could find a home. Barnum put "misfit toys" onstage, saying, in essence, "Aren't they amazing?” (all while filling his pockets. For more thoughts on P.T. Barnum's barely acknowledged influence on American culture author Trav S.D.'s 2005 lecture at the Barnum Museum in Bridgeport, CT is a good place to start.) Cary Grant, who had a harsh poor childhood, got his start as a tumbler in a vaudeville troupe. Years later he described his revelatory first visit to the Bristol Hippodrome:

"The Saturday matinee was in full swing when I arrived backstage; and there I suddenly found my inarticulate self in a dazzling land of smiling, jostling people wearing and not wearing all sorts of costumes and doing all sorts of clever things. And that’s when I knew! What other life could there be but that of an actor? They happily traveled and toured. They were classless, cheerful, and carefree. They gaily laughed, lived, and loved."

That's what "The Greatest Showman" captures.

The film starts with the title song "The Greatest Show," a show-stopper with repetitive thumping percussion (reminiscent of Queen's ferocious "We Will Rock You"). Hugh Jackman—in red impresario's coat and top hat—takes us on a dazzling tour, with cinematographer Seamus McGarvey keeping the movements fluid, and all the actions connected, plunging you into the center ring. The whole number comes from the brazen heart of showbiz: Make it interesting! Give 'em something to look at! Make sure you reach the cheap seats! Barnum croons seductively, "Just surrender cuz you feel the feeling taking over!" I obeyed without reservation.

During the next number, "A Million Dreams" the young and poor Barnum (Ellis Rubin) befriends a well-bred little girl named Charity Hallett (Skylar Dunn), and they dream of creating their own destiny. This is the first time in "The Greatest Showman" where a character stops speaking and starts to sing instead; the segue is gracefully handled, setting up the artificial device early on. If you don't set up that trope with confidence, it makes it look like you're embarrassed to be doing a musical. By the end of the song, the little boy has become Hugh Jackman and the little girl has become Michelle Williams, leaping and twirling across the rooftop of their tenement, bed sheets on the line billowing to the beat.

After struggling to establish himself, Barnum launches out on his own, creating a theatre in the heart of New York City. He gathers together people with special talents as well as those with physical abnormalities (a giant, a bearded lady, Siamese twins, a dwarf—who would eventually be known as General Tom Thumb, Barnum's first "breakout star"). The "audition" sequence is extremely tricky, but the tone is set by Jackman's inclusive delight at the parade of humanity before him. It's a moment when ignored people are for the first time really seen.

Lettie Lutz, the "bearded lady," played by Tony-nominee Keala Settle, with a powerhouse voice, is one of the first to come on board. Settle's performance—her first major role onscreen—is one of the many keys to why "The Greatest Showman" is so effective. She understands the spirit of the project, and you watch her transformation from cringing shame to fearless Diva. Her anthemic "This Is Me" is one of the emotional centers of the film. Barnum's business partner is playwright and society boy Phillip Carlyle (Zac Efron), with snobby parents who are not only horrified at his "slumming,” but also at his romance with an African-American trapeze artist (Zendaya) who sports a pompadour of cotton-candy pink hair. Their love story, as presented, is tender, pained, and sweet.

Rebecca Ferguson plays Jenny Lind, the "Swedish Nightingale," whom Barnum took on a whirlwind concert tour through America It was his entryway into "polite" society. Jenny Lind's power ballad "Never Enough" makes you understand why Barnum, backstage, falls in love with her instantly, throwing his marriage into crisis. Ferguson may be lip-synching to Loren Allred's breathtaking vocals, but it is her performance that carries.

Ashley Wallen choreographed the numbers and there are many innovative moments, where she uses the outer environment to inform the movements of the characters. In "The Other Side," Barnum convinces a reticent Carlyle to join the circus, and as he sings, the bartender puts down shot glasses, swipes the bar with a cloth, all as accents to the beat. The real standout, however, is "Rewrite the Stars," the love song between Efron and Zendaya,taking place in the empty circus tent, when she flies on the trapeze far above him, and he tries to climb up the ropes to meet her. Up, down, they both go, sometimes coming together, dangling above the ground, or sweeping in a wide circle together around the periphery of the tent. It is a moment when the film—every element onscreen—merges and transforms into pure emotion. This is what a musical can do like no other artform.

One of the deep pleasures of "The Greatest Showman" is you don't have to grade the singing and dancing on a curve, as was necessary with "La La Land" (or, further back, to "Chicago," where quick cuts hid Richard Gere's lack of tap dancing skills.) Hugh Jackman, with his powerful high baritone, got his start in musicals, performing in productions in Melbourne, and then in a hugely acclaimed revival of Oklahoma! in the West End. He won a Tony Award for his performance as Peter Allen in The Boy From Oz and has hosted the Tony Awards three times. He is an old-fashioned triple-threat. Film fans may know him mainly as "Wolverine," and there's nothing wrong with that, but once upon a time a song-and-dance man like Hugh Jackman's could sing and dance his way through mainstream Hollywood. He's unleashed here.

So, too, is Zac Efron, who also got his start because he could sing and dance in the phenom that was "High School Musical." His career has morphed into something rather unique, with titles like "Hairspray," "Neighbors," and a hilarious small part in this year's "The Disaster Artist." He has something that cannot be manufactured, although many try, and that is old-school movie star charisma. Add to that a beautiful voice, plus dancing skills, plus a surprisingly ironic sense of humor, and he's got the full package. It's thrilling to see him in a big splashy musical. He's very much at home.

Michelle Williams, with anachronistically long blonde hair, has a strong clear voice, and there's something exhilarating about how she tosses herself into thin air, knowing Jackman will catch her. In what could be a thankless "wet blanket wife" part, Williams adds a spunky sense of adventure, showing us the kind of woman who would say "No" to a ladylike society-wife life, and fling herself into the unknown with her man.

The timing of this release is interesting. On May 21, 2017, Ringling Brothers and Barnum & Bailey Circus folded up its tent for good, after 146 years of uninterrupted operation. Rocked by controversy due to criticisms of exploitation and animal abuse, they retired the elephant acts in 2016, but it was too late. Barnum was dogged by criticisms from the beginning. Many of the "acts" were fakes. Barnum actually didn't say the quote most associated with him ("There's a sucker born every minute") but he might as well have said it and his critics despised him for the assumption about popular entertainment and the regular folk who enjoy it. But in the film, Barnum, with a dazzling smile, explains to a skeptical journalist, "People come to my show for the pleasure of being hoodwinked."

I was hoodwinked by "The Greatest Showman." And it was indeed a pleasure. Ringling Brothers may have closed up shop, but Barnum lives on. 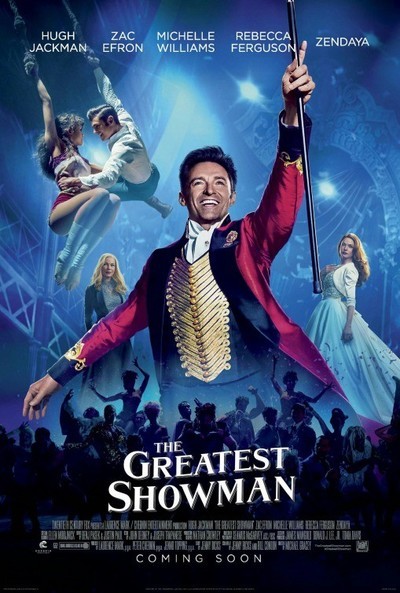