“The Cotton Club Encore” is a reworked version of 1984’s “The Cotton Club” supervised by its director, Francis Ford Coppola. Like his '70s era contemporaries Steven Spielberg and George Lucas, Coppola has taken a shine to fiddling with his earlier films. But unlike Lucas, who added special effects and dissed the Ewoks, or Spielberg, who turned guns into walkie-talkies, Coppola’s modus operandi is adding full sequences back into his re-edited features in the hopes of achieving even more dramatic richness. While I don’t believe he did “Apocalypse Now” any favors with his “Apocalypse Now Redux” versions, “The Cotton Club Encore” is less haphazard and disjointed than the original. It has more character depth as well. Forced to reshape his narrative in 1984 at the behest of Orion Pictures, Coppola has now been given the opportunity to offer audiences in 2019 the film he intended to make.

The troubled production history of “The Cotton Club” is worth seeking out if you are unfamiliar. There were budget overruns, worries on the set, frustrations in the editing room and even murder. The most relevant aspect in terms of this do-over is the studio’s insistence that Coppola remove most of the material that fleshed out his African-American characters. They also insisted that this hybrid of gangster movie and musicals had too many elements of the latter which, considering that most of the musical numbers take place in the Cotton Club of the title, also meant “too much Black people stuff.” The shooting script by Coppola and "Ironweed" writer William Kennedy supposedly balanced the stories of its two lead characters, cornet player Dixie Dwyer (Richard Gere) and hoofer Sandman Williams (Gregory Hines). The final product spent the majority of its runtime stuck in Dixie’s derivative and dreary gangster storyline. Even in its butchered state, “The Cotton Club” played like an intriguing, gorgeously shot and designed musical that kept getting rudely interrupted by a crappy mobster movie.

Though it does a good job of recalibrating Sandman’s story, “The Cotton Club Encore” exacerbates the musical vs. mobster schism with its additions. Coppola restores three musical numbers in their entirety and extends a few more (the visual quality changes in one so drastically that you can see where the new material was inserted). “Encore” gives us more of the tap duet between Sandman and his brother Clay (Hines’ real-life brother and dance partner, Maurice Hines) and, in a heart-cracking act of sweet charity, allows Gwen Verdon (who plays Dixie’s mother) a few more precious seconds of hoofing in the film’s fantasy-tinged final scene. "227"'s Jackée Harry gets a slinky comic number that steals the movie. Sandman’s wooing of beautiful singer Lila Rose (a stunning Lonette McKee) is now complemented by him singing Fats Waller’s “Tall, Tan and Terrific.” And Lila Rose croons a haunting version of Lena Horne’s and Ethel Waters’ signature song, “Stormy Weather.” Every single sonic moment Coppola returns to us is a show-stopping cause for celebration.

The opening scene (and the opening credits music by John Barry) is different here as well. The film now begins with the Cotton Club’s doorman (Woody Strode) turning away a woman he believes to be “colored.” She protests, and is still turned away. It’s a short scene, but it immediately puts focus on the Cotton Club and the ironic racism contained within it: the only way a Black person could get in the place is if they were performing there. The audience was entirely and unapologetically White. The club’s owner Owney Madden (Bob Hoskins) aims to keep it that way, but like Coppola, he has an eye for musical talent and basks in watching his musicians ply their trade.

Alas, that blasted mob story keeps getting in the way. Madden’s a part of it, to be sure, but at least he’s a memorable character. Early on, dishwater-dull Dixie saves the life of Dutch Schultz (James Remar), which puts him in the Dutchman’s good graces and on his payroll. Dixie’s hothead brother Vincent (Nicolas Cage, bonkers as usual) uses nepotism to also get hired by Dutch, but he has a far more violent job than his big brother. Dixie’s job is to keep Dutch’s moll Vera (Diane Lane) entertained. You can easily predict that Dixie and Vera will be dancing the Horizontal Hokey Pokey before too long. Between this, “Billy Bathgate” and a few other films I can name, I began to wonder if Dutch Schultz is the most cuckolded gangster in the history of cinema.

But I digress. Madden tries futilely to keep the peace between the warring criminal factions divvying up Harlem. In addition to Schultz, there’s Schultz’s nemesis Flynn (John P. Ryan) and Black crime lord Bumpy Johnson (Laurence Fishburne, 13 years before he’d revisit the character in “Hoodlum”). Bumpy gets more screen time in “Encore” but that’s the only new thing in a story you’ve seen countless times. To Coppola’s credit, he brings his trademark unflinching gaze to the occasional outbursts of violence. An early knife murder is so nasty that the chandelier becomes splattered with dripping blood. The superb cross-cutting of a gangland execution with Sandman furiously tapping a solo number (shades of the baptism in “The Godfather”) is the one moment when both halves of this story mesh together flawlessly, with machine gun fire waging a fierce battle with Hines’ furious feet.

Despite fleshing out Sandman and Lila’s romance to carry equal weight with Dixie and Vera’s, the most romantic couple in both iterations of “The Cotton Club” is Madden and his right-hand henchman and lover Frenchy, played by the absolutely magnificent Fred Gwynne. Gwynne towers over Hoskins to the point where they look like Mutt and Jeff, and his effortless deadpan bounces off his more boisterous co-star. Their argument about a ransom payment after Frenchy gets kidnapped is the most tender moment in the film. When Madden yells that he would have paid ten times as much as he did for Frenchy’s safe return, Hoskins makes you feel his worry deep down in your soul.

“The Cotton Club Encore” has 27 added minutes and 13 minutes excised from the original cut. One of the removed moments I missed was a scene with Diane Venora as Gloria Swanson (scenes where Fanny Brice and James Cagney appear are also gone). Swanson tells Dixie he oughta be in pictures, though to be honest, Gere is so flat here that you don’t want to believe her. Though he gets an onscreen credit for playing his impressive cornet solos, the normally reliable Gere can’t make Dixie work as a leading man or as a tough guy. Lane received a nomination from the reviled Razzie association, but she’s not at all bad here. The same can’t be said for Remar, whose attempts to evoke Edward G. Robinson are hard to watch. The way he holds his mouth is reminiscent of Robinson, but he has little of Eddie G’s talented charm and even less of his menace.

It’s unfortunate that the late Hines didn’t live long enough to see his role restored to its original glory, but “The Cotton Club Encore” reminds us how much of a triple threat he was. He could sing, he could act and he damn sure could dance. The film also serves as a reminder of Lonette McKee’s vocal prowess and onscreen presence. I wish the screenplay had dug deeper into her character’s feelings on passing for White, but I loved the answer she gave when asked why she would do such a thing. “Because I can,” she says. Though it’s still not entirely successful, I’m glad this version exists. Coppola’s restoration has turned a hot mess into a noble failure.

This review was filed from the New York Film Festival. 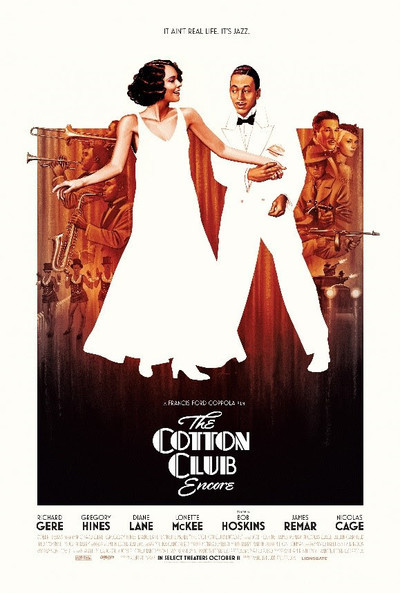 Sofia Coppola as Child in Street