“The Gambler” should have been called “Three Supporting Characters in Search of a Lead.” A gaunt Mark Wahlberg stares out from the poster, his name is above the title, and he’s in almost every frame of this remake, but his character may as well be non-existent. In scenes with Michael K. Williams, John Goodman and Alvin Ing, Wahlberg evaporates into thin air. The screenplay gives him one note to play, which becomes tiresome as the minutes drag on. While that trio of actors control entire sections of the orchestra, Wahlberg’s Jim Bennett stands there waiting to ding out a note on a triangle.

This retooling of the 1974 James Caan film is completely devoid of the grit, nastiness and desperation of the Karel Reisz-James Toback original. Caan’s character was memorable because one sensed that his film might do something awful to him, or worse, that his character might self-destruct and harm himself. By comparison, the 2014 version never indicates that it will maim and/or kill risk-taker Jim Bennett. It’s too in love with his cocky, unflappable arrogance in the face of danger. No matter how dire the situation, Bennett’s escape is never in doubt. This format works well for action movies and superhero yarns; not so much for dramas.

“The Gambler” refuses to acknowledge that Bennett has a gambling addiction. It tries justifying Bennett’s actions by tying them to the existential works he teaches in his college literature class. In that class is Amy (Brie Larson, so great in “Short Term 12”), whose character description sounds like it fell out of a filing cabinet at New World Pictures: College student by day, cocktail waitress in illegal gambling den by night. She knows of Bennett’s reckless abandon with other people’s money at the casino run by Mister Lee (Ing), and I guess it turns her on or something. It’s as good an interpretation of her character as any, because Larson is given less to play here than she got in “Don Jon”.

As Bennett digs deeper holes for himself, every confrontation between him and another character plays like a “very special episode” of an 80’s sitcom. People rant and rave at Bennett, calling him on the carpet for numerous offenses and mistakes as a means of teaching him a valuable lesson. Sometimes they rough him up a bit for emphasis. Then they completely forget about teaching lessons and bend to his will. Jessica Lange, as Bennett’s super-rich Mom, slaps him around when he asks her for the $240,000 he needs to clean up his latest mess. Lange’s over-the-top chastising scene would shame Joan Crawford, but she goes to the bank to get Bennett the money anyway.

Scenes like this occur with the aforementioned trio of Ing, Goodman and Williams, but they know how to toy with screenwriter William Monahan’s preposterous, purple macho prose and posturing. They play the material at odd angles while Wahlberg plays it so straight he’s upstaged at every turn. In these mini-movies, they become the stars and the lead becomes an extra. As Mister Lee, Ing delivers his lines in a smooth, ice cold fashion that’s fun to watch. Goodman plays his entire role topless, and turns the F-word into poetry. Most effective of the trio is Williams, whose Neville serves as a charming mentor to Bennett without losing the “dangerous Black man” edge that Toback’s earlier films liked to fetishize.

Bennett borrows money from each of them, and since he’s originally indebted to Lee’s casino, Lee’s loans are akin to borrowing from Peter to pay Peter. Every so often, one of the three shows up to inquire about their money, and they’re always one step ahead of Bennett. Each knows when he has borrowed from the other, as if a “Bennett Alert” popped up on their phones prior to the scene. What I would have given for scenes where Ing, Goodman and Williams sat around exchanging information and laughing maniacally about how they can’t hurt Bennett too badly lest they upset the audience. This movie should be about them.

Since the plot hinges on whether Bennett can successfully juggle all his schemes and make his big score pay off, it isn’t unreasonable to ask that “The Gambler” get one’s heart racing. But director Rupert Wyatt is too busy trying to be arty and daring with his visuals and soundtrack juxtapositions to think about pacing. In one unwise sequence, Dinah Washington’s classic “This Bitter Earth” plays over extraneous footage of writhing, naked strippers, leaving one to ask “just how bitter IS the earth in the Champagne Room?” In another, Bennett runs what appears to be a marathon, only to arrive at a destination the movie wrongly assumes is bittersweet.

Look, I get it. This is supposed to be some kind of fable-slash-parable. But even the wimpiest fairy tales have some form of credible threat. When various minions finally do pummel Bennett for his sins, I thought “eh, he’ll be all right.” And he was. Where’s the drama in that? 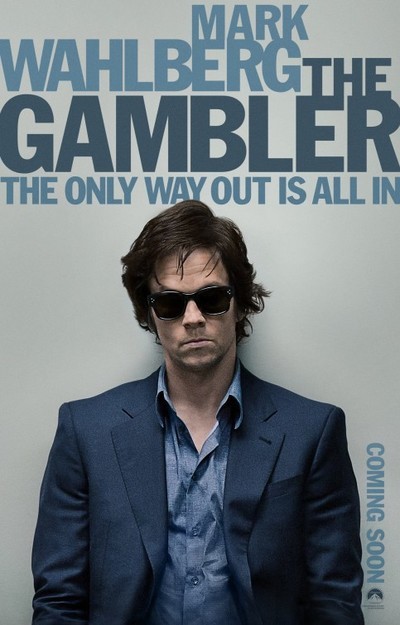 Rated R for language throughout, and for some sexuality/nudity