When I meet people, one of the first things they say to me is "you're from New Jersey? You don't have an accent!" This is untrue; I do have a Jersey accent, of which I am very proud. What I do not have is the movie version, which is an ovah da top Bwooklyn accent squooshed togedda with an even moah ovah da top Staten Eyelen accent. Granted, your standard issue Jersey accent sounds something like that hybrid, but not to the extremes movies and television take it. Outside of the Boston accent, no other accent gets more overplayed than New Jersey's. It's enough to make Bruce Springsteen cry.

Almost everyone in "Don Jon" tawks as if he or she were raised in the middle of the Verrazano Bridge by amateur stand-up comedians. The usually talented Los Angeles native Joseph Gordon-Levitt's Joisey accent is a horrific exaggeration. He plays up the regional sounds and cadences to the point of belief-shattering extremity. He is joined in overdone accent purgatory by New York City native Scarlett Johansson, who should know bettuh, and Glenne Headly, who should get a Razzie nomination for playing the biggest Italian mother stereotype in the history of cinema. At least Brooklyn's own Tony Danza gets the accent right, though I would have forgiven him anyway. Hearing the star of "Who's the Boss?" drop about 500 f-bombs is one of the film's few pleasures.

Back in the days of Sundance, when "Don Jon" had a longer title ("Don Jon's Addiction") and an NC-17 rating, the consensus was that Gordon-Levitt's directorial debut was a more fun version of "Shame." That film was about sex addiction, but "Don Jon" paves its road to hell with pornography. Now shorn of one-third of its original title and whatever spiciness that pushed it over the NC-17 edge, "Don Jon" hits theaters the week after yet another film about sex addicts, "Thank You For Sharing." By refusing to allow us to engage its protagonist, "Shame" kept him at an infuriating arm's length. "Don Jon" wants you to hug its sticky, chauvinistic hero, and is willing to use every single macho cliché in the book to ensure it.

Gordon-Levitt plays The Situation, I mean, Jon, a pumped up weightlifter guy whose sexual technique is so good that his buddies call him The Don. Flanked by his two cronies, who act like hungry puppies jumping around a huge bag of Purina Dog Chow, Jon makes the rounds of the nightclub every week. Spouting dialogue that is neither clever nor interesting, Jon and his crew describe and rate the numerous women they ogle. Since he directed the movie, Jon goes home with a bevy of babes, while his buddies stare glassy-eyed into the distance as he exits. They later use him as a human-sized version of Penthouse Forum Magazine, drooling over his stories rather than trying to get laid themselves.

"Don Jon" shoots these numerous club moments as montages. After the fifth or sixth time the exact same montage is played with a different woman, one starts to wonder what the hell got cut out of the movie since Sundance. Another set of montages might provide that answer: Since Jon is addicted to porn, or "paauhhn" as it's called here, a quick-cut series of dirty images invade the screen every time Jon waxes his whooziwatzit. I'm going out on a limb to say these images were probably a lot more pornographic in the early, festival cut. What we're left with is a sad set of barely R-rated T&A moments that even Skinemax would reject.

Once his conquests become part of the blame, "Don Jon" introduces four women, three of whom are the cringe-worthy constructs of teasing harpy shrew girlfriend, overbearing mother and silent witness. ScarJo plays the girlfriend, who rightfully freaks out when she discovers Jon's pastime, but is otherwise such an awful high-maintenance, pushy, arrogant stereotype that the deck unfairly gets stacked against her. "Don Jon" even ranks on ScarJo for trying to get Jon into night classes so he can get a better job, and their last scene together is an unnecessary, ugly grab for sympathy for Jon. This could have been a fine comic character, warts and all, but the script leaves ScarJo with too few notes to play.

Jon's mother (Headly) is solely concerned with her son's inability to find a woman to bear her grandchildren. When she thinks he's found her, Headly overacts to the point of madness. Mom dotes on Jon and fights with her sexist husband (Danza) while completely ignoring her daughter (Brie Larson). Larson stays mute for 98% of the film, so you know she's bound to say something profound before the end. Wait until you hear what it is.

The last woman "Don Jon" parades before us is Esther, a fellow student at Jon's night school class. Since she's played by Julianne Moore, you can predict she'll have a deep, dark, tragic secret hanging over her head. JuliMo interacts with Jon in ways so awkward they bring a little spark to "Don Jon." The spark fades when you discover what her true purpose is. You've heard of Magical Negroes; JuliMo plays a Magical Cougar.

There is one choice piece of good material in "Don Jon," and it details Jon's Sunday morning ritual of road rage, church and confession. Jon screams and drives crazy (this isn't a Jersey stereotype—this is true) en route to church, then confesses his sins. The priest's method for dispensing penance, and Gordon-Levitt's responses, hint at a level of creative introspection that the film ditches in favor of comfortable cliché. Remember when I said cliché is not a bad thing if it's done well? This is not done well. 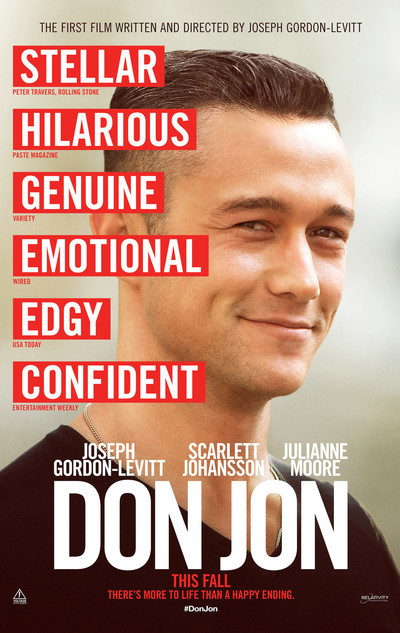