They’re all beautiful, exquisitely dressed and vapid, the foreigners who’ve traipsed across the Moroccan desert for a weekend of debauchery in “The Forgiven.”

Regardless of their marital status, sexual orientation, or country of origin, these people are awful without exception. There’s not a redeeming one in the bunch, not one you’d want to spend time with—well, maybe Christopher Abbott, because he’s the hardest to pin down, and so his terrible traits aren’t quite so pronounced. He also looks quite dashing in a dinner jacket. It’s that kind of party—at least until they start doing lines of coke on the coffee table.

Writer/director John Michael McDonagh wants us to feel scorn as he satirizes the racism and classism of wealthy Westerners exploiting the Middle East as an exotic destination. They don’t view the locals as human beings, as a deadly accident will reveal, and they don’t have much time for the Moroccans’ feelings or traditions. They’re merely dipping a toe in this world and ignoring the damage they’ve left in their wake. And McDonagh, in adapting Lawrence Osborne’s 2012 novel, uses their blunt dialogue as a cudgel as if their actions alone weren’t sufficient. There may not be much to these people, but they’re constantly declaring their emptiness in the most articulate ways.

“I like it here,” says Abbott as New York financial analyst Tom Day. “It feels like a country where a useless man could be happy.” Or as a celebrated Moroccan novelist played by Imane El Mechrafi puts it: “People disappear here. They just vanish.”

But in Ralph Fiennes’ character, McDonagh presents the possibility for evolution and even redemption. By then, though, it may be too late.

Fiennes’ David and Jessica Chastain’s Jo are a miserably married couple who’ve traveled from London to visit an old friend of theirs: Richard (a sneering Matt Smith), who’s renovating a sprawling villa four hours outside Tangier with his American partner, a day-drunk named Dally (Caleb Landry Jones). We can tell quickly that their marriage is fraying from their bored expressions and the way they low-key bicker when David polishes off a bottle of white wine at the hotel. There’s no spark in this fight: It just feels like habit. (This is a very different husband-and-wife dynamic from the one Fiennes and Chastain shared in “Coriolanus.”) So when they find themselves lost and confused during the long, nighttime drive to Richard’s remote estate—and accidentally run over an impoverished teenager selling fossils on the side of the road, killing him instantly—the trauma is certain to worsen that rift.

But first, David and Jo have a soiree to attend where they have to pretend that everything is fine. Other guests include Abbey Lee as an Aussie party girl who jumps in the pool in her sequined dress; Marie-Josee Croze as a sanctimonious French photographer who makes broad generalizations about Americans; and Alex Jennings as a British lord who arrives late with a posse of pretty, much-younger women in tow.

They are careless people, to paraphrase F. Scott Fitzgerald—until the boy’s father shows up from his village to make David care, at least. Ismael Kanater plays Abdellah in a performance that seems bravely quiet and stoic at first, almost stereotypical, but eventually he reveals a simmering sorrow and rage. Abdellah insists that David return with him to his home to help bury the boy, named Driss, as is their custom. David’s immediate reaction reveals his bigotry: “They might be f**king Isis for all I know.” But eventually he relents, with the intention of only being gone overnight and paying this family off—reluctantly—for their trouble.

From here, McDonagh (brother of Martin McDonagh, the writer of “In Bruges” and “Three Billboards Outside Ebbing, Missouri”) alternates between David’s journey toward forgiveness and the drunken antics back at the villa. As the guests trade bitchy bon mots between sips of their cocktails—and Jo enjoys a fun, sexy flirtation with Tom while her husband’s away—David learns from his exposure to this family and begins to accept the error of his ways.

One situation is just as superficial as the other, though. There’s precious little to any of these characters, and so the possibility that they might change at all because of this traumatic series of events feels unearned. Chastain is cool and glamorous as Jo, who had the foresight to bring multiple pairs of designer sunglasses for this weekend jaunt to the middle of nowhere. And having worked with the likes of Aaron Sorkin, Chastain clearly knows her way around this kind of muscular dialogue. But beyond her impeccable appearance and the fact that she used to be a children’s book author, we know nothing about her. There are no stakes when it becomes clear that Jo’s entire life is about to be thrown into flux; it’s more of a passing curiosity, like her dalliance with Tom.

McDonagh’s film is well-crafted throughout but ultimately has nothing fresh or insightful to say about the ugliness of white privilege. It’s like attending a weekend bacchanal and forgetting what happened once Monday morning rolls around, or perhaps not wanting to remember. 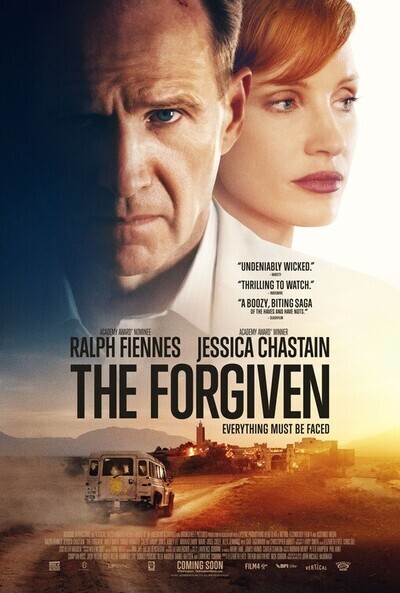