Funny how a few years can feel like a millennium. It was in May of 2016 that I attended a sold-out screening of Josh Kriegman and Elyse Steinberg’s scathingly hilarious documentary, “Weiner,” and joined the audience in guffawing at the absurd “Veep”-esque nightmare brought about by its impeccably named titular subject. Little did we realize how grave the cost of Anthony Weiner’s sexting scandal would become mere months later.

A criminal inquiry into obscene material sent to a minor by the disgraced congressman-turned-sex offender resulted in the FBI reopening its investigation of Hillary Clinton’s e-mails 11 days before the 2016 presidential election. This avalanche of bad decisions laced with denial ultimately led to Donald Trump, a failed businessman whose innumerable scandals and stated desire of grabbing women by the genitals haven’t lessened his popularity among the religious right in the slightest, assuming the presidency. No longer could his gross incompetence and the shameful blind spot that led to his ascendence be deemed a laughing matter.

It’s only fitting that Kriegman and Steinberg have re-teamed with their brilliant “Weiner” editor Eli Despres to direct “The Fight,” an unofficial follow-up documentary that tackles a handful of Trump’s inhumane policies, while embodying the empathy that he blatantly lacks. Consider how the president, in one of the film’s most chilling scenes, earns cheers from his base by mocking the pain of immigrants fleeing the violence in their home countries by seeking asylum in the United States. “I’m afraid for my life!” Trump wails with all the unfeeling sarcasm of an eighth grade bully, displaying the sociopathic tendencies instilled in him by his father and detailed at length by his niece Mary in her new book.

It is precisely that sort of mentality that the American Civil Liberties Union has spent the past century combating, and this film marks the first time that they have granted access to their offices in New York City. So impressed were the filmmakers with the ACLU’s victorious efforts to block the president’s Muslim ban during his first days in office that they decided to focus their collective lens on four particular lawsuits filed by the organization against the Trump administration.

Such an approach could’ve easily proven to be overwhelming, as Trump’s unconstitutional assault on civil rights has ensured that the hits will keep on coming, with enough egregious offenses to distract us from the more insidious ones. Thankfully, Despres and his fellow editors, “Waiting for ‘Superman’”’s Greg Finton and Kim Roberts, are adept at juxtaposing multiple story threads while allowing for enough small endearing moments to keep the crisp 96-minute picture from devolving into an expositional slog. As evidenced in “Weiner,” this film’s trio of directors possess a keen eye for the humorous idiosyncrasies inherent in their subjects’ lives.

Laughter is an essential fuel when dealing with subject matter as heavy as this, and “The Fight” does a splendid job of humanizing its heroic lawyers, particularly when they fumble with the shortcomings of modern technology (such as voice recognition software that mistakes the words “after the fact” for “Ben Affleck”). The film also doesn’t shy away from the friction that occurred within the ACLU after it defended the right of white supremacists to hold their Unite the Right rally in Charlottesville, an appalling display of racist vitriol that served as a pivotal wake-up call to countless Americans who bought into the fallacy that a “post-racial society” was ushered in by the election of Barack Obama.

I appreciated how the faces of torch-wielding marchers were not censored here as they were in “BlacKkKlansman,” and though ACLU legal director David Cole stands by his decision to defend civil liberties for all, it’s clear that there’s a bigger risk in enabling such a monstrous event to occur when its perpetrators have an ally in the White House. Reproductive rights lawyer Brigitte Amiri immediately recognized how the retirement of Justice Anthony Kennedy opened a slot in the Supreme Court for Trump to fill with a jurist, namely Brett Kavanaugh, who vows to overturn Roe v Wade. It’s sickening to watch Kavanaugh, whose own reputation is irrevocably marred by sexual assault allegations and deserving of its own “Weiner” exposé, take what he considers the moral high ground by denying Amiri’s client—a 17-year-old rape victim—the right to an abortion on the basis of her immigrant status.

Another condescending man standing in the way of Jane Doe’s right to choose is Scott Lloyd, a hypocritical lawyer who testily admits on camera that he believes abortion is a sin (his aim to “protect the dignity of human life” obviously doesn’t extend to that of the unaccompanied minor). We also meet petty officer Brock Stone, client of ACLU lawyers Josh Block and Chase Strangio, who would be among the servicemen impacted by Trump’s transgender military ban, yet another move made by his administration to ensure that anti-discrimination laws don’t apply to the LGBTQ+ community.

It is imperative that an issue-driven film such as this pauses long enough for us to feel the palpable grief that is so often diluted by the sheer glut of disastrous news. These added beats can be as simple as MSNBC host Rachel Maddow suddenly losing her composure while reporting on babies and young children being sent to tender-age shelters resembling Japanese internment camps as part of the Trump-ordered family separations. Among those immigrant parents severed from her child is the client of ACLU lawyer Lee Gelernt, a woman dubbed Ms. L. Perhaps the film’s single most shattering image is that of Ms. L when she is reunited with her seven-and-a-half-year-old daughter, whom she hasn’t seen in five months. After the pair collapse onto a stairway in a magnetized embrace, the camera lingers on them until we hear their deep whimpers of pent-up emotion.

Nearly as cathartic is the response of voting rights lawyer Dale Ho upon realizing that his nonstop sleepless nights and time spent away from his family may have finally paid off. His skill at rooting out voter suppression causes him to find fault in the attempt of a census law to gather citizenship information, which would be more accurate when retrieved from the Social Security Administration. In order to secure a deserved PG-13 rating, the film awkwardly bleeps out multiple expletives delivered by Ho, while allowing at least one to audibly slip by, despite the fact that no 13-year-old is unacquainted with such language, especially since it is spewed on a consistent basis by our potty mouth-in-chief.

All of this footage predates the COVID-19 pandemic, which has brought the already staggering amount of need in this country to unprecedented levels, while illustrating its systemic racism in glaringly stark terms. With fascism on the rise both in our own government and throughout the world, we find ourselves marching for the same causes that our parents did when they were our age. No wonder the wallpaper on one of the lawyer’s computers is a still from “The Neverending Story,” a title serving as a poignant metaphor for the cyclical nature of history and our unceasing pursuit of justice. Rather than allow a racist note labeling him as an “immigrant pig” to derail his concentration, Ho places it on a bulletin board next to his desk, a prominent reminder for why he and his colleagues will continue to fight the good fight. 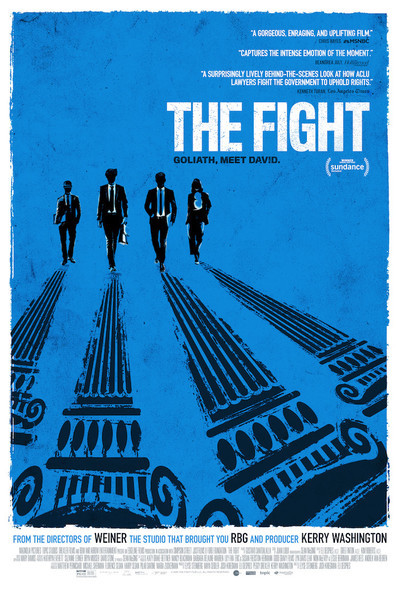