“Weiner” is a documentary that plays as cringe comedy. Like that sub-genre, it comes packaged with a star whose irascibility often leads to eye-covering levels of discomfort. Watching through your fingers, you find yourself telepathically communicating with its subject, seven-time Congressman and former New York City mayoral candidate Anthony Weiner. “Walk away, dude!” Your brain warns, just before all hell breaks loose. In one instance, the film reads your mind by presenting an onscreen person who asks, “Why didn’t he just walk away?” But Weiner can’t walk away, and the film leaves you to decide whether it’s because he’s so passionate about the issues or he’s just blessed with that New York City attitude so familiar to those who reside here. Whatever the reason, it makes for a very entertaining movie.

The film follows Weiner as he runs in the 2013 Democratic mayoral primary of New York City. This campaign is his return to politics after an embarrassing 2011 scandal involving the boon of social media, the “dick pic.” The coincidence does not go unnoticed: A married man named Weiner sending out pictures of the body part that shares his last name is enough to give New York Post headline writers multiple orgasms. In fact, the first question asked by a New York Post writer during a phone interview with Weiner is, “What’s your favorite headline of ours?”

“Weiner” is also a comeback story of sorts. After initially lying about the sexted pictures, Weiner came clean and resigned from Congress. Prior to that, his reputation as a scrappy fighter for his Congressional district was well-known. The film shows the famous 2010 clip of Weiner’s outraged rant on the floor of the U.S. Congress over a healthcare bill for 9/11 first responders. It follows this with a montage of positive, crowd-pleasing clips of Weiner from various news outlets. Then, just as we get the overview of a politician unafraid to rumble for his political beliefs, we’re suddenly confronted by a picture of some overheated men’s briefs accidentally sent by Anthony Weiner to his entire Twitter feed. It’s a jarring reminder that our own worst enemies are quite often ourselves.

Yet another bait-and-switch awaits viewers unfamiliar with this story. Despite all the negative press after announcing his 2013 run, Anthony Weiner finds himself atop the polls in the race. There’s a great scene on the MTA where New Yorkers recognize Weiner and display the stunned NYC newspaper headlines about his success. All seems to be forgiven, and once again the spotlight is on Weiner’s politics instead of his pecker.

And then the other shoe drops. Far more explicit pictures of Weiner hit the Internet, accompanied by dirty text messages delivered to various women. The scandal is far bigger than anyone anticipated, giving the sense that the politician had not been completely truthful during his original apology. While constituents feel betrayed, comedians like Bill Maher and Jane Lynch stage hilarious readings of the most salacious sexts involving Weiner’s online alter ego, Carlos Danger.

Directors Josh Kriegman and Elyse Steinberg don’t shy away from the jokes. They also don’t turn away from the pain felt by all the players involved, from Weiner’s campaign staff, who believed in second chances despite opposition from family and friends, to Weiner’s wife Huma Abedin, to Weiner himself. Cameras seem to be everywhere, capturing things I’m sure its subjects would rather not have been recorded. Only once does Weiner ask the camera to be shut off, and it occurs at such a horribly painful stare-off between husband and wife that I felt relief when the directors acquiesced.

Occasionally, an offscreen voice behind the camera interacts with Weiner, echoing the sentiments that have just popped into the viewer’s mind. “Did anybody ever tell you that you don’t talk about your feelings?” the voice asks after receiving no response to a prior inquiry. Later, the voice asks the question guaranteed to be on the minds of anyone who watches this film: “Why did you let me shoot this [documentary]?”

It’s a good question, and I’m not sure we get a satisfying answer to it. But I definitely got the feeling that, underneath Anthony Weiner’s brash exterior was a stoic resignation to eternally lay in the bed that he made, and he knows that he deserved its mattress. “Weiner” is not afraid to take its subject behind the woodshed, and more often than not, he goes willingly. Joining him for this very public flogging are the press, who come off as chattering parrots consistently fascinated by the same shiny object, and the American public’s often infantile prudishness about sex. Reality TV-style celebrity, in the guise of one of Weiner’s sexting partners, is also up for a turn on the rack.

The only person who really elicits any sympathy in “Weiner” (and thereby penetrates the cringe comedy factor with genuine pathos) is his wife, Huma Abedin. Abedin is a seasoned vet of politics, so she never comes off as a helpless victim or someone soliciting pity. She advises Weiner on the visual politics of when she should appear with him at events, undercutting clips of pundits who paint her as a wife dragged onstage by her shamed husband against her will. Kriegman and Steinberg’s camera always catches her thinking, often letting her remain onscreen in various states of professional and personal exasperation. “She’s completely different from me,” Weiner tells the directors after one particularly testy exchange. “Is that what attracted her to you?” they ask. “I think it’s in spite of that,” he glumly responds.

“Weiner” is part-cautionary tale and part-punishment assignment, a darkly funny tale that makes one question why anybody would want to enter politics, especially when everything one does is scrutinized by a public court. 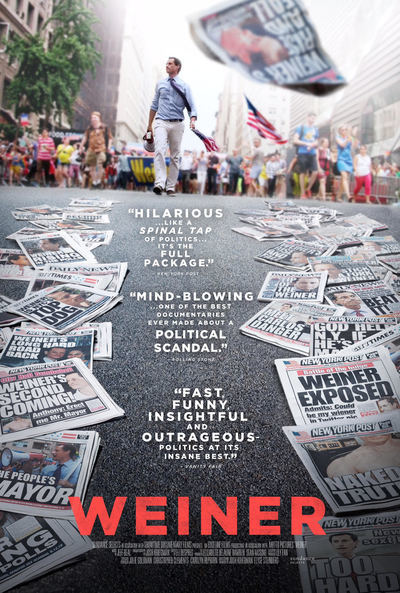