“The DUFF” has the decency to acknowledge its roots in the great John Hughes teen movies of the 1980s—even beginning by referencing the five high school types stuck serving Saturday detention together in “The Breakfast Club,” which recently celebrated its 30th anniversary. But quickly and convincingly, it becomes its own funny and fast-paced phenomenon with its own modern-day charm.

Much of the film’s allure springs from Mae Whitman’s performance as Bianca, the DUFF—or Designated Ugly Fat Friend—of the title. While Whitman is none of those negative things—and director Ari Sandel’s film, based on the YA novel by Kody Keplinger, is quick to establish that DUFFness is a relative concept—she provides the film with both its grounding and its radiance.

Quite simply, Whitman is adorable. After a long career of mostly supporting roles—including hilarious work as George Michael Bluth’s mousy, religious girlfriend, Ann Veal, on “Arrested Development”—this should make her a star. Whitman displays flawless comic timing and consistently makes inspiring choices in terms of delivery, reaction, even the slightest facial expression. She shines confidently in a self-deprecating role, and it’s irresistible.

She also has sparkling chemistry with Robbie Amell as the next-door neighbor she’s known her whole life, who just happens to be the hunky, handsome captain of the high school football team. His character, with the studly name of Wesley Rush, could have been a typically vapid jock, but Josh A. Cagan’s script fleshes him out better than that. Amell brings the requisite swagger but also a sense of humor and even a sweetness, which are unexpected. He keeps up quite nicely with Whitman, who’s been at this since she was three. (Along those lines, Whitman and Amell are both in their mid-20s playing high school students, but the age disparity isn’t as egregious as it is in, say, “Grease” or “Beverly Hills, 90210.”)

Wesley is also the one who informs Bianca that she’s the DUFF to her two gorgeous and leggy best friends, Jess (Skyler Samuels) and Casey (Bianca Santos). Basically it means she’s the slight outsider in terms of coolness, popularity and fashion, and even though she’s usually the smartest person in the room, she’d never realized this about herself. The discovery sends her into a tailspin (Allison Janney has some nice moments as her recently divorced mom who tries to perk her up with self-help platitudes) but it also inspires her to take action. She quickly unfriends both girls across all social media platforms and sets out to make herself over on her own terms.

But she can’t do it alone—she needs a clue—so she enlists the one person whose feedback she (reluctantly) acknowledges she can trust in Wesley. In turn, she helps him pass chemistry class, where his failing grades might cost him his scholarship to Ohio State. Naturally, there’s a different kind of chemical reaction going on between the two lifelong friends, even though Bianca insists she has a crush on emo singer-songwriter Toby (Nick Eversman, who played Mick Jagger in “Get On Up”). Wesley and Bianca also have to navigate the savage advances of Wesley’s on-again, off-again girlfriend, the resident mean girl Madison (a sharply icy Bella Thorne). If you’ve ever seen a teen movie, like, ever, there’s never much doubt as to how this tricky love triangle will turn out, but there are a few pleasant surprises along the way.

Director Sandel’s eclectic resume includes the Oscar-winning, live-action short “West Bank Story,” a musical comedy about competing falafel stands, and the scattershot documentary “Vince Vaughn’s Wild West Comedy Show.” Here, with his first feature, he keeps things moving at a lively clip, in keeping with the film’s theme of the proliferation of social media. He even manages to find clever avenues into the tired tropes of the genre, such as the trying-on-clothes montage.

But after bopping along deftly for a long while, “The DUFF” missteps toward the end by laying it on too thick with speechifying about self-esteem and defying labels. Even once was too much, but Whitman gets saddled with having to spout this notion a couple different times, when the revelations and resolutions within the film itself made it perfectly clear. Additionally, the world didn’t need to see Ken Jeong doing his sassy shtick ever again, but he does tone it down slightly as the adviser of the school paper where Bianca is the star reporter.

Then again, that’s another example of how “The DUFF” defies expectations: It even makes Jeong’s antics tolerable. 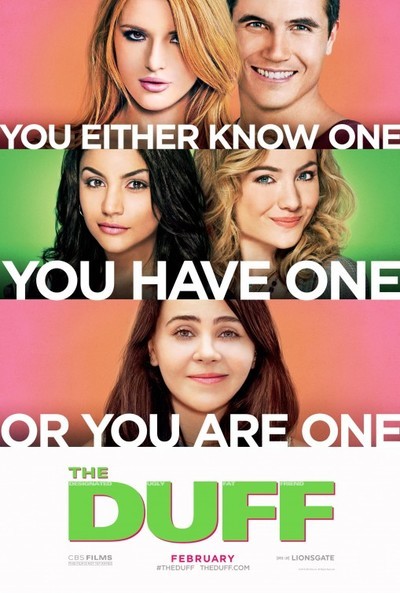 Rated PG-13 for crude and sexual material throughout, some language and teen partying

Bianca A. Santos as Casey