The opening scene of the James Brown biopic “Get On Up” plays like a bad Dave Chappelle skit. Please beg my indulgence as I describe it. A woman is shown sitting on the toilet, her biological activities intercut with a drugged-out James Brown driving to an office building he owns. Dressed in a hideous green track suit, Brown (Chadwick Boseman) enters the building and discovers that someone has, in his words, “taken a s—t in mah bathroom!” This revolting development sends Brown back to his truck to retrieve a shotgun. Returning to the office, Brown threatens a group of White people, ranting and raving about the bodily function that will prominently and literally feature in any future discussions on the auteurism of director Tate Taylor.

“How would you like it if you came home and found James Brown takin’ a s--t in yo’ toilet?” he asks his captive audience. Personally, I’d ask him to sing once he was through. But I digress.

Mid-rant, Brown is suddenly distracted by one of his own songs playing in his head. He stares into space with the same expression Eddie Murphy wore when the microphone electrocuted him during the “James Brown Celebrity Hot Tub” skit on Saturday Night Live. After regaining composure, Brown accidentally shoots a hole in the ceiling before calling out the offending crapper and congratulating her for bravely defying his “no pooping in mah bathroom” rules. Hearing sirens in the distance, Brown mutters “uh-oh, I betta go!” As he walks out, a neon sign announces the movie’s title.

I bring this scene up to illustrate the first of many bad choices the filmmakers of “Get on Up” make during its 2-hour plus runtime. James Brown enters this retelling of his life story not as the Godfather of Soul nor as the young boy who will become hardened and confused by life’s troubles. He enters it as a buffoon reeking of danger and insanity who is rendered harmless by his own comic ineptitude. This image hangs over “Get on Up.” Since the film hops around in time like an arthritic rabbit, we know that, despite how powerful and important Brown becomes during the course of the film, we must eventually return to this neutered, cartoonish version of him.

Like most biopics, “Get on Up” plays like a greatest hits album of its subject’s successes and failures. A life as rich and complicated as Brown’s would require an HBO series. Here was a man who wrote civil rights anthems and suffered through a Jim Crow South, yet who considered former segregationist Strom Thurmond a grandfather figure. Exploring complexities like that aren’t always doable in a short time. But the simpler things “Get on Up” leaves out are still aggravating. Its goal is to whitewash and mass market Brown’s story to the masses, to make the singer perhaps most inextricably bound to Blackness in American history fit comfortably in the post-racial notions of today. It prefers a safer, sanitized James Brown. For example, we see Brown influencing a young Mick Jagger (who is a producer on this film) but there is absolutely no mention of how samples of Brown’s music formed the cornerstone of hip-hop from old school to gangsta rap. You might consider this oversight to be unimportant, and you’d be wrong.

Truth be told, “Get on Up” isn’t really interested in exploring how important Brown’s music was to any of the numerous styles it influenced. Instead, it just wants to play some of the big hits you love while ticking off a checklist of standard biopic milestones. Screenwriters Jez and John-Henry Butterworth try to hide this by fragmenting the story, jumping back and forth in time with little regard to momentum or emotional build-up. The jumps in time rarely feel related to one another as narrative. One minute, we’re in 1930’s South Carolina with James, his mother (Viola Davis) and aunt Honey (Octavia Spencer), the next we’re in the 1970s, watching Brown mistreat his martyrdom-worthy right hand man Bobby Byrd (Nelsan Ellis).

“Get on Up” also makes the near-fatal mistake of having Brown break the fourth wall to talk to the audience. The device is not used enough to be warranted nor clever, and in one case, it’s downright egregious. In an extremely effective long shot, Brown unleashes a horrific beating on his wife Dee Dee (Jill Scott), after which he walks directly toward the camera, stops and sneers at us like a pomaded Freddy Krueger. It dragged me right out of the moment and the film.

Boseman makes a very credible James Brown. His makeup and hair are realistic and stunning, and in the few instances Taylor decides to give us a full shot of Brown during musical numbers, it appears as if Boseman has done his dancing homework. Watching him perform, and listening to him perfectly nail Brown’s speaking voice are the true pleasures of “Get on Up.” Playing Brown from a teenager onward (Jamarion Scott complements nicely as the younger version of Brown), Boseman is never unconvincing, even in that embarrassing opening scene. He is especially good in the film’s quiet moments like the scene where Brown’s mother visits the star in his dressing room. Davis reminds us why she’s the queen of the onscreen cry, but Boseman’s beautiful underplaying keeps her from stealing the scene. Boseman’s last scene rendition of “Try Me” is so emotionally well-synched to Brown’s vocal that it almost made me forgive “Get on Up”’s trespasses.

Of the other actors, only Jill Scott, Ellis and Dan Aykroyd really register. Aykroyd, who worked with Brown on both “Blues Brothers” movies, looks at and speaks to Boseman with genuine affection, making his mentor role a successful supporting performance. Ellis is fantastic, and Scott turns what could have been solely a victim role into a sexy, complicated depiction of a woman who truly believes in the marital vow “for better and for worse.”

The technical credits are also proficient. Stephen Goldblatt’s cinematography and Sharen Davis’ costumes effectively highlight each time period. Goldblatt’s work in the Jamarion Scott sequences has an ominous darkness that hints at the psychological devastation poverty and racism would render on James Brown. Davis’ costumes visually highlight Brown’s different musical periods, from the Famous Flames to his 70’s funk with Bootsy Collins.

Eventually, “the director of 'The Help'” (as the ads so prominently tell us) returns to Brown and his jacked-up green jumpsuit, leading the cops on a bizarre, violent car chase where the cops have little problem shooting at the hardest working man in show business. Thankfully, we’re spared the Nick Nolte-ish mug shot Brown posed for post-arrest, and to be clear, I’ve no problems with this true-life event appearing in “Get on Up.” I just question its placement at the beginning.

Despite my grievances, there is fun and enjoyment to be had here. Any excuse to hear a James Brown song is good enough for me, and I enjoyed seeing Craig Robinson’s Maceo Parker amongst the band performers. The band scenes are some of the film’s best, and a restaurant scene between Brown and Little Richard is fun for  threatening to veer off into seduction. Brandon Smith’s Richard bats his eyes at Brown and calls him “sugar.” Brown’s complete lack of discomfort is kind of liberating.

I went into “Get On Up” hoping for “Sex Machine.” Instead, I got “Living in America.” That’s not a bad song, to be sure, but it’s far less funky, ethnic and dangerous than one would expect. So is this movie. 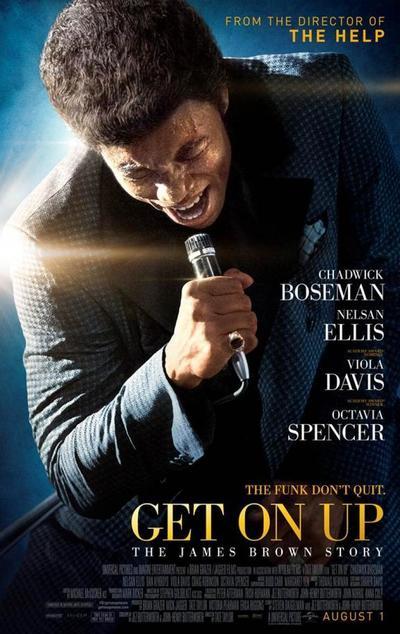 Rated PG-13 for sexual content, drug use, some strong language, and violent situations