Jim Jarmusch's style is so singular that if you fall in love with it, as some of us did over 30 years ago with "Stranger than Paradise," you'll believe there's no such thing as a bad Jarmusch picture, because you'll judge each new film in relation to Jarmusch's best, not what anyone else might've theoretically done with the same material. "The Dead Don't Die" is far from Jarmusch's best, but there's something to be said for its zonked-out acceptance of extinction.

You know the drill from all the other zombie films released in the last half-century—in particular George Romero's 1978 "Dawn of the Dead," a satire on consumerism in general, American materialism specifically. Zombies take over the small town of Centerville (location unnamed, although the film was shot in upstate New York) and commence wandering the land they knew, repeating actions that once defined them, like swinging a tennis racket, or dragging a guitar or lawnmower around. Zombie children loiter in a ruined candy store, muttering brand names like incantations. ("Skittles...") One zombie (horror film veteran Larry Fessenden) snacks on an arm as if were a turkey leg. "Cleveland," he mutters, shambling away. When shot or slashed, the dead don't bleed, but instead emit puffs of soot. Ashes to ashes, dust to dust, etc.

The local cops are our guides through this low-energy onslaught. Chief Cliff Robertson (Bill Murray) hopes the zombie plague will be reversed, or recede on its own. His second-in-command, Officer Ronnie Petersen (Adam Driver), is convinced that things are sure to end badly. We know this because he says it no less than four times, until the phrase fills Cliff with both annoyance and dread. Their colleague, officer Minerva "Mindy" Morrison (Chloe Sevigny), is a wreck, like Veronica Cartwright cratering in the original "Alien."

The police are are so used to routine that in the opening scene, when a local hermit named Bob (Tom Waits) responds to their queries about a farmer's stolen chicken by shooting at them, they get back in their car and drive away. What will they do when things fall apart? The news is saying the world has spun off its axis. Literally. Days last longer than they used to. Night arrives at once. You can't get a cell phone signal. Commercial radio goes in and out, except when a station plays Sturgill Simpson's "The Dead Don't Die," which, as Ronnie helpfully informs us, is the theme song of the film you're watching.

The other townspeople respond with varying degrees of panic and resourcefulness. Frank Miller (Steve Buscemi), the aforementioned farmer who accused Hermit Bob of chicken-stealing, barricades himself in his farmhouse. Hank Thompson (Danny Glover) locks himself in his hardware store with fellow local businessman Bobby Wiggins (Caleb Landry Jones), who sells pop culture memorabilia at his gas station, including posters for horror movies that Jarmusch probably saw five times in theaters. The most capable character is the new undertaker at the Ever After Funeral Home, Zelda Winston (Tilda Swinton). She's unperturbed by the ghoul horde, strolling among them and dicing them with her katana. (She and the title character of Jarmusch's "Ghost Dog: The Way of the Samurai" would've gotten along swimmingly.)

Each role has been cast with precisely the actor you expect to see in that sort of part: Driver is a soft-spoken, bespectacled nerd-hulk who gets a little too enthusiastic over the prospect of beheading former neighbors (the chief asks him if he's ever played minor-league baseball); Swinton is a long-haired, steely-eyed, elfin badass who seems to exist beyond the concepts of nationality or gender; Buscemi plays a blandly racist schmuck in a red hat whose impending death no one mourns; Carol Kane is a local drunk-turned-zombie whose only line is "chardonnay." Characteristic of Jarmusch (and his regular cinematographer Frederick Elmes, also a veteran of David Lynch's films), scenes that might otherwise have played as genre box-checking become strangely beautiful, particularly when characters drive slowly through ghoul-dense residential streets at night, steering around former neighbors, or when the camera lingers on an image that's as lovely as it is unsettling, like a tableau of undead faces mashed against storefront glass.

The premise of "The Dead Don't Die" is as basic as it gets. Watching it is, I imagine, like watching a great chef make a grilled cheese sandwich. There's only so much you can do with this specific dish, but it's still fun to watch a master slice the cheese and blood-red tomatoes, each move as graceful as Zelda's. Jarmusch seems amused not just by how little his own screenplay asks of him, but also by the (perhaps unnecessarily severe) constraints he's placed on himself. He leans extra-hard into self-awareness. The result evokes those old Looney Tunes shorts where Bugs and Daffy realize they're in a cartoon. When a character acquires voice-over powers and begins summarizing thematic aspects of the script that were already made plain by the acting and directing (such as the notion that, in an a way, these mindless materialists were already dead, hmmm) it's as Jarmusch is jabbing a bony elbow in the ribs of a genre he loves (Romero's satire wasn't subtle, either) while making extra-sure we hear what he's saying.

And what is he saying?

This is going to end badly.

Dread is in the air. Pets and livestock hide from humans that once called themselves their caretakers. They know what's coming.

At times, Jarmusch's point-of-view seems to align with Ronnie's, who knows we're all doomed and is taking a scientific interest in the trudge to the finish line. Other times he's simpatico with Zelda, whose mind floats above the mayhem. Still other times he's like Cliff, saddened by the ebb of hope. Towards the end, he might as well be Hermit Bob, hiding in the woods, watching the endgame through foliage. (Not a week goes by that I don't think about a stray line from Jarmusch's vampire romance "Only Lovers Left Alive," where a bloodsucker reveals he's buying property in Detroit because the coasts are sure to drown.)

In the best Romero tradition, the jokey explanations of what precipitated the apocalypse are open-ended metaphors for real fears, American and global. The world got knocked off its axis by something called "polar fracking," which seems like word salad until you hear representatives of the polar fracking industry on the news, denying that the process is bad for nature. Centerville, a placid American town that seemed culturally and economically dead when the story began, is shaken from its torpor by a literally seismic upheaval that makes one part of the population wish to kill the other. The mortal majority at first refuses to accept that they're facing an extinction-level threat. When they've finally figured it out, it's too late: there are just too many of Them.

The paranoia doesn't all flow in one direction. In an early scene at the local diner, that cliched emblem of America's ideological crossroads, MAGA Frank unthinkingly insults Hank, a black man ("Keep America White Again," Frank's red cap reads) and although Hank shrugs it off, his weary expression confirms that this kind of thing has happened before. The first zombie to knock on Frank's door, looking to eat his face off, happens to be Black.

As in a "Twilight Zone" episode, or a classic horror movie, the most recent string of environmentally-focused Godzilla films, or the plague on Thebes that vexed Oedipus, the extinction threat comes from within. It's an unspoken answer to our hubris, our sins, and our inability to recognize that our time is up, and that we're the ones who accelerated the timetable by being ignorant, greedy, and clueless. "So very ravenous," Zelda says, observing the undead, and damning the living, too, "but well past yer expiration date."

This film is punk rock in slow-motion. 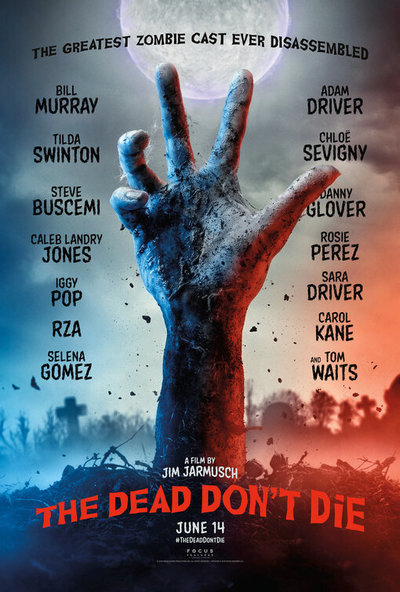 Rated R for zombie violence/gore, and for language.