Frustratingly not-quite-there from start to finish, the paranoia-soaked railroad thriller "The Commuter" is the latest installment in the unofficial "Liam Neeson Late Winter Butt Kickers" series. The LNLWBKs started in January 2009, with the surprise smash "Taken," and continued with more "Taken" movies, plus three Neeson adventures by Jaume Collet-Serra, the director of this new one ("Unknown," "Non-Stop" and "Run All Night" were the others). They're a staple of our moviegoing diet by this point, nearly as ingrained in the seasonal calendar as the holidays themselves. Like nearly every entry, this new one is worth seeing for the unfussy determination of Neeson, a couple of impressively choreographed action sequences (in particular a one-take, hand-to-hand fight that attempts to one-up the famous hammer sequence in "Oldboy"), and an intriguing premise that the filmmakers never manage to fully exploit. By "worth seeing," I don't necessarily mean "rush to the nearest theater, forsaking all else," but rather, "if this comes on TV, you'll probably watch the whole thing, as long as you're not in a hurry to be somewhere." Who knows, it might even be ideal train viewing. The plot has all the hallmarks of a daydream that got obsessively worked-over for years during somebody's daily rides to and from work.

Neeson's character, Michael MacCauley, is a 60-year-old ex-cop turned insurance salesman who works in midtown Manhattan. His boss tells him that he's being fired right when he's about to begin his return trip home to see his wife (Elizabeth McGovern, who deserves better than this) and college-aged son (Dean-Charles Chapman) in Westchester, Long Island. Michael loses his phone in the train station due to a pickpocket he doesn't realize bumped him on purpose, then meets a mysterious stranger (Vera Farmiga) who tells him he has to locate a certan passenger on the commuter train before it arrives at its final stop and plant a tracking device on him/her, at which point that person will be killed. Michael will get $25,000 up front and another $75,000 upon completion of the mission—enough to offset the economic havoc wrought by his firing, including the potential scuttling of a reverse-mortgage on the family home that would've paid for his son's college.

This is one of those moral conundrums that really only generates suspense if you believe that a working class hero who radiates decency would condemn another person to death for $100,000. Nevertheless, Neeson goes the extra kilometer trying to sell us on the character's economic desperation as well as his macho pride (Michael couldn't bring himself to tell his wife and kids that he just got fired, so there's pressure to make this right immediately so he'll never have to spill the truth).

Director Collet-Serra, who did the mostly terrific shark thriller "The Shallows" and seems to have a knack for stripped-down, goal-directed action flicks, has clearly absorbed Alfred Hitchcock films where the action occurs on the boundary separating the real from the metaphorical or dreamlike. The kaleidoscope of humanity that Michael meets on the train is a touch of "Rear Window," the arrangement between him and Farmiga's character is a faint echo of "Strangers on a Train," and there's a hint of "North by Northwest" in the notion of a (mostly) ordinary New Yorker getting pulled into a conspiracy and struggling to regain control over his life. In the end, though, this is a tweedy suburban version of a confined-space action flick. Michael is on his own the whole time. Any allies he picks up along the way are temporary, and not all can be trusted.

The class-warfare, eat-the-rich messaging feels rather slapped-on, though, and the movie never gets close to generating the political framework it would have needed to to be taken seriously as a parable of this or that, as opposed to yet another movie where Liam Neeson beats people up. It should be assumed that there are no extraneous scenes in a film like this—by which I mean that, if you meet Michael's ex-partner (Patrick Wilson) and their former supervisor (Sam Neill) early in the story, and get a couple of moments where Michael talks about the economic collapse of 2008, and a scene that ends with Michael giving the finger to a jerkbag of a stockbroker, and one where Michael looks up from a bar to see a TV news story about officials being arrested on corruption charges, you can bet it will all come together in the end, haphazardly. No one involved in the production seemed to think we'd care about clarity when it came to stuff like this. They weren't entirely wrong, but the articulation is still wanting: why even do this kind of politically allegorical action picture if you're not going to, y'know, really do it? Like, with feeling?

I did care very much about Neeson's character, though, thanks mainly to his mastery "just say your lines and hit your marks" acting. No matter who he's playing in these movies, Neeson always attacks the problem at hand with the low-key focus of a guy trying to open a stuck jar of jam. It's my considered opinion that Neeson's late-career brand of business class dad machismo has yet to meet a director that can fully do it justice, but reasonable minds may differ. In any case, it's doubtful anyone will be debating the fine points of his late-career filmography when Michael is hanging underneath a moving train like Indiana Jones, or breaking the little glass box at the end of a car so that he can use the hammer on someone's skull. 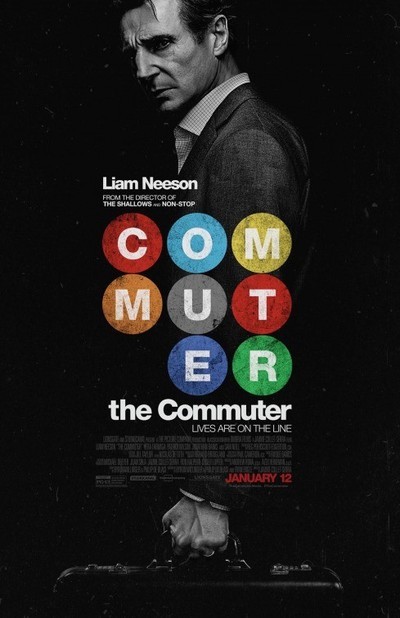 Rated PG-13 for some intense action/violence, and language.