Ditching the twisting high concepts of works like “Unknown” (amnesia!) and “Non-Stop” (one flight!), action star Liam Neeson and director Jaume Collet-Serra have crafted their most satisfying work to date by sticking to a tried-and-true crime movie template, and allowing a talented cast and tight production values to be the only high concept they need. “Run All Night” isn’t perfect, but it’s surprisingly satisfying on its own terms, elevated by a better-than-average ensemble and some razor-sharp editing to cut through any nagging questions about the plot. More than he’s been allowed to do in either Collet-Serra vehicle before this one, Neeson gets to portray a real character here, a man who may have once had a particular set of skills but has seen then dulled by age, regret and whiskey. “Run All Night” is proof that quality action films don’t really need to reinvent the wheel each time out as long as they make it spin this smoothly.

Jimmy Conlon (Neeson) used to be a notorious mob enforcer. If he knocked on your door, you knew you were in trouble. Rumored to be behind over a dozen murders at the behest of the infamous Shawn Maguire (Ed Harris), Conlon doesn’t have much left to live for. He’s the guy who wakes up in the bar the next morning and just starts drinking again, forced to beg Shawn’s son Danny (Boyd Holbrook) for money and drunkenly play Santa Claus at the Maguire Christmas party. The man who once was feared is now openly mocked by a younger, tougher generation of bad guys. Jimmy also lost all touch with his son Mike (Joel Kinnaman), who is trying to live a straight life as a limo driver with his wife (Genesis Rodriguez) and two kids (with a third on the way).

The first act of “Run All Night” is really the arc of two sons—one trying to get away from the criminal underworld and one diving as deeply as possible into it. As Danny, the very talented Boyd Holbrook is all twitchy, nervous energy, the kind of dangerous sociopath who seems capable of doing whatever it takes to gain the respect of his father through criminal notoriety. To that end, he brings heroin into their world. Dad says no, but Albanian heroin dealers don’t like to be pushed out of a possible criminal enterprise. It just so happens that the dealers hire Mike to drive them to a meeting with Danny that goes horribly awry. Before you know it, Danny is dead, and Mike is a target of everybody in the criminal underworld, including a high-priced assassin played with effective cool by Common, and only his estranged dad can keep him safe till morning.

Neeson does arguably the best work of his action career here in that he captures a man who doesn’t just pop to life as a killing machine again but has the muscle memory to get the job done one last time. Jimmy may stumble through subway tunnels but he can still choke a man out and fire a perfect shot when he needs to. And the actor rises above the potential cliché of the criminal redemption arc in the way he doesn’t allow the potential melodrama to sink into his portrayal. His take on Jimmy is a man doing what needs to be done, not necessarily to right the wrongs of the past but because there’s nothing else he can do at this point. And watching Neeson and Harris in scenes together, especially a great, tense meeting in the middle of the piece, is a surprising joy. They’re both great here in that neither overplays the hero or villain archetype. Jimmy, the good guy, is a murderer, while Shawn, the bad guy, is emotionally mourning the loss of his child. They are far more complex than they would have been in the hands of other actors.

“Run All Night” is also subtly elevated by a top-notch team behind the camera, especially editor Craig McKay, a two-time Oscar nominee for “Reds” and “The Silence of the Lambs.” For at least an hour, “Run All Night” hums—to be fair, there’s a bit of a sag in the middle and the entire piece runs too long at nearly two hours. But take note of the way McKay and Collet-Serra orchestrate a great sequence in a subway station, creating a rhythm between the cops trying to find Mike and the bad guys coming after Jimmy. Or look at the great car chase scene, which is shot in a bit too much close-up (as are a few of the fights), but has a visceral pace to it that makes it impossible to look away. Or watch one of the final sequences in a train yard and the way it perfectly fits together to build tension. There’s a tempo to “Run All Night” that really serves as the entertaining foundation of the whole film, and it’s what so many boring action films lack.

Some of “Run All Night” doesn’t make a lot of sense and I wished for a little more grit and a little less polish in some of its darker beats (although viewers should be warned that this piece doesn’t shy away from extreme violence at times). There’s also a fine line between entertainment and being a bit too on-the-nose when you choose to set a shoot-out in an Irish bar to The Pogues, but the film had won me over by that point. And that’s when you really know an action film has worked overall—when its flaws are beaten down like the guys who choose to cross Jimmy Conlon by what works. 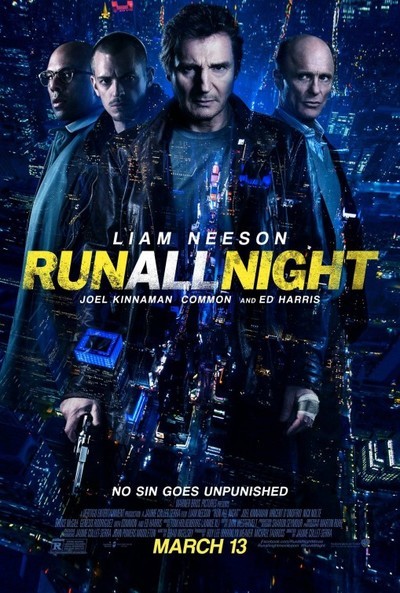 Rated R for strong violence, language including sexual references, and some drug use