Paul Schrader’s 2017 “First Reformed” worked up such an apocalyptic fury and resolve that it seemed, in some way, like a Last Film. But the writer/director is neither dead nor apparently ready for retirement, so what is he going to do but continue making films? This one, “The Card Counter,” starring Oscar Isaac in the title role and featuring Tiffany Haddish and Tye Sheridan as characters who profoundly affect the man’s life, is neither a greatest hits package nor a restatement of purpose or principles, although it has elements of both.

For Schrader, French filmmaker Robert Bresson is the inexhaustible fount. He’s one of the three filmmakers treated in his thesis-turned-seminal-film-text Transcendental Style In Film: Dreyer, Ozu, Bresson and the one Schrader cribs from almost obsessively. (I’m not saying that like it’s a bad thing, honest.) Schrader calls “The Card Counter” one of his “a man sitting in a room” or “man at a table” films; that man originated with Bresson’s “Diary of a Country Priest.” That priest was a diarist, and his writings were reinforced with the words read aloud in voiceover. Schrader made Travis Bickle a diarist, and specified the same kind of voiceover, which “Taxi Driver” director Martin Scorsese buttressed with some visual cues out of Godard, who was well influenced by Bresson himself.

In “The Card Counter” Isaac’s “William Tell,” who also goes by “Will Tell,” and whose name alludes to both the classic fable and every poker player’s Achilles’ heel (it’s a name he’s given himself) keeps a diary in a composition notebook in which he writes immaculate cursive script. He doesn’t start writing, though, until he’s turned whatever motel room he’s in white, with the help of sheets he puts on the furniture and bed. A touring poker player, Will is a man of discipline. He has much gambling wisdom to impart: “Red and black roulette is the only smart bet.” Because, he goes on, your odds of winning are almost 50 percent. “You win, you walk away. You lose, you walk away.”

Why does Will play? To hold himself together. His memories of the time he spent in Abu Ghraib as a U.S. Army torturer himself make him not want to live—he explicitly recalls that during his time in prison he goaded another inmate in the hope that man would kill him—but live he does anyway. He’s looking for a reason.

He finds two—Haddish’s La Linda, a kind poker tour bankroll rep with whom Will falls in love, and Sheridan’s Cirk (pronounced “Kirk” but spelled with a “C,” he tells everyone on introduction), the son of a military vet who served with Will and whose own guilt compelled him to kill himself. Cirk’s got a bright idea that he offers Will a piece of: to abduct the military contractor who trained the torturers and got off scot-free, and give him some of his own. The three characters are an odd trio, beautifully played. The exuberant Haddish underplays with brilliance, while Sheridan keeps Cirk earnestly appealing in spite of his homicidal intentions.

Will takes Cirk on the road with him, hoping to raise enough poker winnings to get Cirk out of debt, and to impart sufficient life experience to convince him to give up his murderous crusade. This has echoes of Travis Bickle’s self-appointed mission to save the teen prostitute Iris. But Will is mainly looking to redeem himself. His time at the table is accompanied by moody, almost keening songs by Robert Levon Been, former leader of Black Rebel Motorcycle Club and the son of Michael Been, whose similarly searching songs adorned Schrader’s lovely 1994 “Light Sleeper.” (That film’s lead actor, Willem Dafoe, here plays that military contractor Cirk is after.)

So this is a movie that, of course, is about much more than poker. More to the point, it’s not really about poker at all. That is underscored by the moment Tell decides to walk away. The game is a thing Will does but he’s dismissive of all that’s attached to it. To that end, there’s a funny nickname joke early on and Isaac’s definitive line reading of “I hate celebrity gambling.” In a sense this disinterest provides a key difference between this and other Schrader “man at a table” movies. “American Gigolo” was somewhat invested in exploring male prostitution; the drug dealing and consumption of “Light Sleeper” was a key factor of the culture of New York City at the time. The environmental concerns of “First Reformed” are more burning than they were four years ago.

With “The Card Counter,” Schrader has a sub-theme he can toss off like a light cloak, and when he does, the movie swerves into a semi-surreal realm not entirely unlike that of the climax of “First Reformed.” But then it swerves back into a variation on Bresson that constitutes one of the most brilliant shots of his career.

This review was filed with the Venice Film Festival. The film opens exclusively in theaters on September 10th. 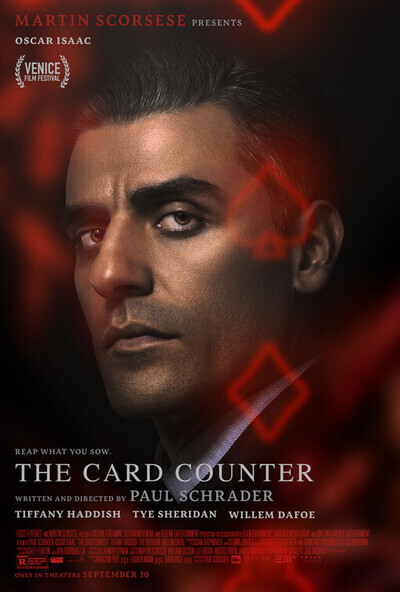