It takes prodigious comic gifts to make a loathsome, pathetic character so mesmerizing that you enjoy watching him dig himself into a hole for 90-plus minutes. Jim Cummings, the star, editor, co-writer, and co-director of "The Beta Test," has those gifts.

Cummings plays Jordan, a remorseless, manipulative Hollywood agent working for a CAA-like behemoth who gets ensnared in a conspiracy in the months leading up to his scheduled wedding to his fiancee Caroline (Virginia Newcomb). His troubles start when he accepts an engraved invitation to cheat. This is not a metaphor: the invitation is elegantly inscribed and printed on purple card stock and sealed in a purple envelope. Jordan is instructed to arrive in a certain hotel room on a certain day at a certain time if he wants to experience a no-strings-attached tryst with a woman. Both partners will stay masked and anonymous.

Jordan goes. He has a great time. The masks are also purple, of course. Then Jordan's euphoria fades and is replaced by paranoia. He was plenty paranoid even before he stepped out on Caroline, so this is bad. Jordan is secretly a highly functioning alcoholic (though he wouldn't describe himself that way). He takes a lot of personal and professional risks, most of them superficial, greedy, or nihilistic. He blurts out insults whenever he's dealing with anyone who has something he wants but isn't obligated to give it up.

As Jordan plunges deeper into the mystery of who sent the invitation and what they meant to gain by it—at various points impersonating a police officer and a private detective, and threatening to sue people he just met—"The Beta Test" starts to feel like the unholy love child of "Eyes Wide Shut" and "Office Space." If my family's life depended on it, I couldn't tell you what this movie is narratively "about." The ending, which is confusing and feels slapped-on, only intensifies the sense that the production is a vibe pretending to be a message.

There are digs at the major Hollywood agencies' war against the Writer's Guild of America, and commentary on the culture of abuse and exploitation that was considered an ingrained and expected part of white-collar entertainment industry employment till recently. And there are barbed attacks on the culture of entitlement that defines American businesses where fratty bros like Jordan congregate. (Move the setting to Wall Street or Silicon Valley and you wouldn't have to change anything but the insider humor.)

I'll resist the urge to get deep in the weeds of the plot, because there's a lot of it, and it's questionable whether it fits together neatly and illustrates the movie's thematic concerns rather than setting up the next explosive scene between Jordan and whatever unfortunate soul he happens to be dealing with. The latter, I suspect, is the movie's true reason for being: maybe the filmmakers created a substantive, often hilarious main character and then built a project around him. Jordan incarnates the spirit of early 20th century "video or it didn't happen" disasters. He's a walking social media shame cycle, complete with insincere apology.

But if you can maintain a tone, you can keep an audience's attention, and Cummings and co-director/co-star PJ McCabe are more adept at maintaining tone than a lot of better-known filmmakers. Like Cummings' previous feature, the horror comedy "The Wolf of Snow Hollow," "The Beta Test" understands how to set up and pay off a joke by putting the camera in a particular spot and moving it to reveal or conceal a crucial detail. The movie is also adept at creating a cinematic version of the subjective voice in fiction, viewing Jordan in a detached, cool manner for long stretches, then moving us inside of his fevered brain long enough for him to mishear a statement by another character, which in turn triggers another panic attack, meltdown, or swan-dive into paranoia that is funny when we're in Jordan's head, and that becomes even funnier when we leave his consciousness and see him as others do.

Cummings has dark-and-slender, Billy Crudup-Jim Carrey leading man looks, and they intensify the self-lacerating nature of the character's outbursts. That the joke is ultimately always on Jordan makes the character amusing rather than merely unpleasant. He verbally abuses subordinates, co-workers, lower-level functionaries at retail shops and in his own apartment building, his own friends, and Caroline, often while pretending to have authority he doesn't possess (sometimes he comes on like Tom Cruise's "Eyes Wide Shut" character trying to gain access to inaccessible places by assuring the gatekeepers that it's OK to let him through because he's a doctor). Jordan's disruptive snits are usually followed by (or interspersed with) half-assed apologies that sound as if Jordan is saying what he believes society expects him to say, not what's in his heart.

Is there anything in Jordan's heart? Maybe not. He's a hollow, rotten person, faking his way through life and pinning his failures on others. At one point Caroline accuses him of giving a performance as himself, a rare insult that penetrates Jordan's thick skull. It certifies the film's deep connection to Mary Harron's movie version of "American Psycho," a classic corporate satire about the masks of masculinity. Jordan is literary kin to Patrick Bateman, but he's not responsible for the film's body count (which is triggered by various cameo characters acting out against mates who also took advantage of the invitations). The wide-and-narrow "epic" frame (courtesy of cinematographer Kenneth Wales) aestheticizes the characters' pettiness and superficiality, and highlights the excellence of the casting (by Amey René Morris), which fills the movie with performers who are 100% credible as characters who have greater advantages than most of their countrymen could dream of, but still scheme 24/7 to acquire more.

"The Beta Test" has a keen ear for the way that the phony-macho culture of deal-making and money-moving muddies language and reveals cravenness and duplicity. "Love the honesty ... we love that," Jordan says weakly after a client verbally eviscerates him, adding, "We're gonna keep the conversation going!" Hassling apartment managers to force them to reveal the identity of a delivery person, Jordan warns them that he works for a major Hollywood agency identified by three letters: "I'll give you a couple of guesses. You're only gonna need one."

Cummings and McCabe seem to be working through personal animosities, so withering are the film's takedowns of agents and agency culture, but it's impossible to accuse them of pettiness when you could put the targets' pictures in the dictionary next to the word "petty." "We just signed Tiger Woods as a director this morning," Jordan tells Caroline. "We're gonna reboot 'Caddyshack' with dogs."

I don't know if this all adds up to much beyond a metric ton of talent gathered in one film, but you'd have to be a Jordan to fail to appreciate it.

Now playing in select theaters and available on all rental platforms. 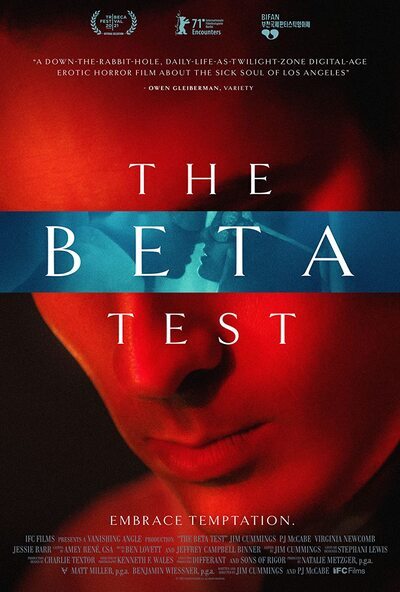