The Wolf of Snow Hollow

Jim Cummings broke out with a character study that rocked the SXSW Film Festival in “Thunder Road,” but he takes an unexpected turn into genre filmmaking with his fantastic follow-up, “The Wolf of Snow Hollow”. More than just your standard horror/comedy, “The Wolf of Snow Hollow” is a tonal balancing act, a movie that doesn’t go for laughs or horror as much as weave various tones and styles through its excellent script. I thought Cummings was a talent to watch after “Thunder Road,” and now I’m sure of it.

PJ (Jimmy Tatro) and his girlfriend Brianne (Annie Hamilton) have rented a remote cottage in a snowy corner of the country. After a rough encounter with some locals at a bar, they retire to the cabin, where PJ is planning to propose. Knowing this is a werewolf movie, these early scenes have the feel of the opening sequence of “Scream” as Cummings plays with the fact that viewers are aware something horrible is about to happen. It turns out that PJ won’t get to propose to Brianne, who goes out to turn the hot water on late at night and ends up torn to pieces by something that leaves a large pawprint.

And I mean “pieces”—most of the officers who respond to the scene have never seen anything like a woman with missing body parts. It certainly startles John Marshall (Cummings), a man dealing with so much personal trouble in his life that the arrival of what they first presume is a serial killer may be the straw that breaks his back. In a series of quick beats, Cummings reveals that John is a recovering alcoholic with a sick father (Robert Forster), who also happens to be the town sheriff, and he has an ex-wife who hates him. Officer Julia Robson (Riki Lindhome) is a quiet, confident partner, and John is trying his best to make things work with his daughter (Chloe East), but he immediately looks too fragile to handle the biggest case of his life at this particular time.

Everyone treats the first death like there’s a madman in their midst, but it happens again the next night. And the next one. And the town starts talking. Even as John pushes back against the concept of something supernatural, people wonder if there’s a literal werewolf in those snowy hills. Cummings writes several scenes of incompetent police work but not in a traditional broad comedy sense. Instead he captures how stressed, normal people can butt heads when they disagree about how to handle something unimaginable. And he really focuses on what a case like this would do to a man like John, allowing him to become unlikable in multiple ways. He’s not your average hero. He’s an average guy thrust into a nightmare. There’s a big difference. There are so many versions of this movie that overplay either John’s heroism or turn him into a bumbling idiot, but Cummings takes neither easy road as a screenwriter. The movie is much better for that daring choice.

It’s also far more visually confident than people may be expecting. “Thunder Road” was a solid dramedy but with "Snow Hollow" Cummings uses space to build tension (with ace cinematography from Natalie Kingston), and the excellent editing by Patrick Nelson Barnes and R. Brett Thomas both hides the low budget and increases the discomfort. You know the way that intense cold reaches your bones? You feel that while you’re watching “Snow Hollow,” as icy and chilly a movie as I’ve seen in a long time.

The snow-covered setting and bumbling cops, along with Cummings’ deadpan sense of humor, have led to comparisons to the Coen brothers and there is a sense of “'Fargo' meets 'Silver Bullet'” in some of “The Wolf of Snow Hollow,” but it’s not like Cummings wears his influences as obviously as some genre filmmakers. Everything from Universal monster movies to John Carpenter feels like they’re in the fabric of this piece but he never succumbs to the obvious shout-outs that often make films like this feel like cheap imitations. And he directs performers well. His performance is the centerpiece, but he draws a gentle, poignant turn out of Forster, whom it’s impossible not to miss already.

Around the 45-minute mark of “The Wolf of Snow Hollow,” the film starts to feel a bit rushed as scenes and twists pile up and Cummings pushes to his closing revelations. I appreciate how tight this movie is at around 80 minutes, but it’s the rare recent movie that could have actually been a bit longer. Let us live more in John Marshall’s nervous breakdown and the rising panic of the town around him instead of being in such a hurry to get to the film's closing twists.

However, Cummings never completely loses the rhythm and he even finds a way to make “The Wolf of Snow Hollow” topical. A warning to the comment section that this is undeniably and explicitly a werewolf movie about toxic masculinity. John even has a speech about how the myth of the werewolf came about as a way to explain horrific violence against women, often committed in the light of the full moon because it allowed them to see what they were doing. It couldn’t be men. It must be the wolf’s fault. And the film’s final turns only amplify this theme, one that doesn’t feel tacked onto the narrative as much as inherently a part of a genre that has long been built on damsels in distress. This time, a filmmaker is willing to interrogate what that says about mankind too. 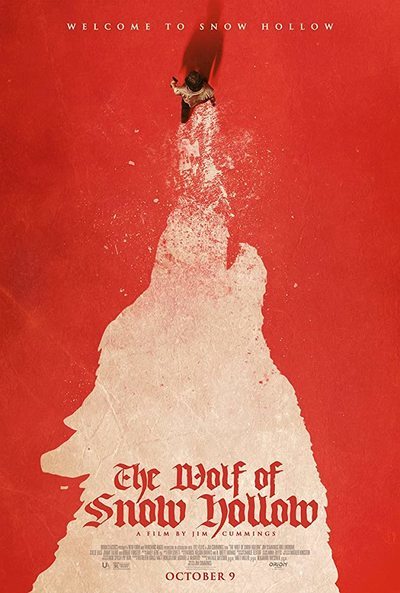 Rated R for violence, bloody images, language throughout and some drug use.