Your mileage may vary, but Hulu’s “The Amazing Johnathan Documentary” is my least favorite kind of movie, one that pretends to be about the famous celebrity in the title but instead focuses on the far less interesting non-celebrity sharing the screen. That other person is always on some journey to enlightenment facilitated simply by being in the star’s orbit. Recent examples of this ghastly type of film include “My Week With Marilyn,” “Hyde Park on Hudson” and “My Dinner With Hervé,” the last of which has much in common with this non-fiction film because it also features an investigator whose story would benefit most from the sudden death of his often self-destructive subject. The fact that director Ben Berman is making a documentary would make this concept quite unsavory, that is, if the entire enterprise weren’t so damn dull.

Rather than focus on the magician in the title, Berman instead documents his quest to make this film. His involvement starts when The Amazing Johnathan miraculously defies a doctor’s 2014 diagnosis that he has one year left to live. After bucking this death sentence three years running, Johnathan returns to the stage for several new engagements. Like Penn and Teller, his former Vegas compatriots, Johnathan’s act took a funny and often gruesome approach to deconstructing magic tricks. In his heyday, he was everywhere; clips from numerous shows like David Letterman bear that out. On a personal note, I saw him in Vegas once and can tell you he put on one aggressively entertaining show. It’s a no-brainer that a documentarian would want to tell this comeback story.

Berman is granted exclusive access to Johnathan, or so he thinks. We soon discover that there’s another film crew making a separate documentary. Then a third film crew shows up. And then a fourth filmmaker comes out of the woodwork with footage from a cancelled prior attempt. One of these crews had been making their film since 2014. Another doesn’t want to be seen on camera, so Berman blurs their faces out whenever they cross his viewfinder. Berman begins to believe he’s being pranked by Johnathan. He’s certainly being taunted by him—Johnathan constantly reminds him that one of the crews is run by the Oscar-winning producer of “Searching for Sugar Man” and “Man on Wire.” “They have two Oscars,” he says repeatedly, much to Berman’s chagrin.

We start to think we’re being pranked by the film as well, and “The Amazing Johnathan Documentary” does very little to earn our trust and convince us otherwise. Berman employs aggravating gimmicks like jumping back and forth in time for no reason, mimicking an old-school VHS player on screen and censoring details about the competing documentary that somehow makes it to a public showing before this one does. He films his talking heads ("Weird Al" Yankovic and comedian Judy Gold among them) responding to the twists and turns of his directing journey, each of whom reacts with bemusement or mockery. Making matters worse, intriguing details about The Amazing Johnathan and his wife are quickly pushed aside to concentrate on the director’s tales of filmmaking woe or his attempts to entrap his competitors.

At one point, Berman contemplates smoking meth in order to show the magician doing it onscreen. Johnathan agrees to being filmed only if the director incriminates himself as well. Despite being told by a lawyer that he should not film himself partaking in illegal activity, Berman does it anyway, then has to censor the footage. Considering how many movies have shown drug addicts enjoying their poisons of choice, I couldn’t fathom why Berman thought his self-sacrifice made for original or compelling viewing.

You know what would have made for compelling viewing? Either an in-depth character study of the entertainer’s irascible nature or a more honest take on Berman’s ultimate reason for wanting to shoot this documentary. When The Amazing Johnathan calls Berman out for being upset that his star didn’t drop dead mid-filming, Berman at first demurs before offering us a too-brief moment of insight into his own reasoning. This moment of clarity is so rushed that it robs us of any empathy we may have felt for him and any forgiveness we may have had for being jerked around by this rickety contraption of lies and half-truths. It all ends on a cutesy note that’s more grating than clever. Throughout “The Amazing Johnathan Documentary,” I couldn’t help but wonder if that competing documentary were any better. 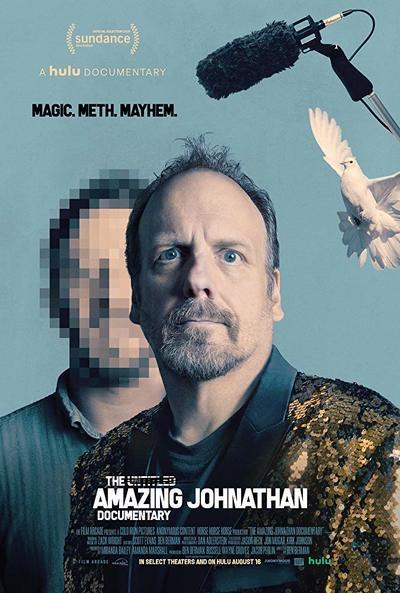 The Amazing Johnathan as Himself

Criss Angel as Himself

Max Maven as Himself

Eric André as Himself

Judy Gold as Herself

Scott 'Carrot Top' Thompson as Himself

Anastasia Synn as Herself