The kind of story we need to exist

Do some stories exist only because we need them to? "Searching for Sugar Man" is about a gifted singer-songwriter from Detroit who was an enigma. His face half-hidden by long flowing hair and dark glasses, he sang in folk music bars with his back turned to the audience. His name was Sixto Rodriguez.

He was so good that without fame or a large fan base, he signed a two-album contract with Sussex and A&R Records. The first album, "Cold Fact," got a rare four-star review from Billboard. Neither it nor the second one, "Coming From Reality," sold well, the contract was dropped, and the story seemed to end there.

Nothing else was heard from Sixto Rodriguez. But several years later, his albums traveled half the world away, to Cape Town, South Africa, where bootleg copies passed from hand to hand and his songs became anthems of the anti-apartheid movement. When an indie record store owner named Stephen Segerman released them commercially, they took off, the first selling 500,000 copies, which in that nation would be comparable to the Beatles or Elvis Presley.

This documentary by Swedish director Malik Bendjelloul moves between Detroit and Cape Town, speaking to such influential South Africans as Rian Malan about the impact Rodriguez had at the time. But what about the singer himself? Nothing was known. Rumors spread that he was dead — a suicide, who killed himself onstage by shooting himself or setting himself afire. Absolutely no evidence existed to support such theories, which by their sensational nature would hardly have passed unnoticed. In the absence of information the mystery only grew, about a man who was known only by his music, and even whose face was hardly clear.

The rise of the Internet made it easier for Segerman to search for his best-selling star (whose royalties went to A&M Records). Segerman himself began to be called "Sugarman," after the title of one of Rodriguez's songs. In the film, he emerges as one of those figures independent music depends upon — always there in his store, supporting and listening to music he believes in, spreading the gospel. In the case of Rodriguez, the gospel had already spread through South Africa on its own, propelled by the power of the songs.

There was no mention of Rodriguez on the net. Segerman posted a Web page about his search. In the late 1990s he received a comment on that page — no, not from Rodriguez but from someone who had information. If there is any chance you know nothing about this film, I am not going to reveal its ending. Let me just say it is miraculous and inspiring.

"Searching for Sugar Man" is a documentary that enlists us in the process of its search. Using archival footage, it shows both Segerman and Bendjelloul pressing ahead in a quest that became increasingly frustrating. The information they eventually dislodge about Rodriguez suggests a secular saint, a deeply good man, whose music is the expression of a blessed inner being. I hope you're able to see this film. You deserve to. And yes, it exists because we need for it to. 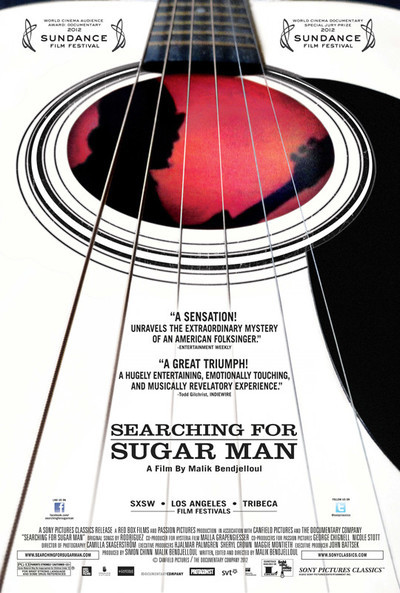