There are about half a dozen bright spots in the new animated feature "The Addams Family," but in between them is the unbright and unoriginal storyline about how the real monsters are the ordinary people, not the weird people.

Charles Addams began creating his deliciously macabre characters for one-panel New Yorker cartoons in 1938, but they didn't get names and storylines until the 1960's television series, taking the last name from the cartoonist who created them. It was only on the air for two seasons, but just about everyone remembers that finger-snapping Vic Mizzy theme song and TV Guide listed them as one of the all-time top ten television families. The series spin-offs include two live-action feature films, a Saturday morning cartoon show, and a Broadway musical.

What makes the Addams Family so appealing is the contrast between the ghoulish details of their lives and the endearing sweetness of their family dynamic. Father Gomez (here voiced by Oscar Isaac) and mother Morticia (Charlize Theron) adore each other and are loving and devoted parents to their daughter Wednesday (Chloe Grace Moretz) and son Pugsley (Finn Wolfhard). And their deep enjoyment of what otherwise might seem scary—having an escaped prisoner from the asylum for the criminally insane as a butler, a disembodied hand as an all-purpose helper, applying the ashes of dead parents as make-up, encouraging a child to play with explosives—makes it funny and even endearing instead.

In this modernized, animated version, we first see Morticia putting on that ashy make-up for what turns out to be her midnight wedding, interrupted by angry neighbors with torches and pitchforks who want all the people they consider weirdos out of town. Gomez promises her they will find a home that "no one in their right mind would be caught dead in." Cue the 'Welcome to New Jersey' sign. They literally run into the above-mentioned escaped prisoner. "Is he all right?" No, comes the relieved and delighted reply. "He seems perfectly demented." The asylum is deserted (except by ghosts), the entrance blocked with yellow crime scene tape. Inside, there are white outlines showing where bodies were discovered. Home sweet home!

Fast forward to 13 years later, with tweens Wednesday and Pugsley happily creating mayhem, or happily unhappily, as Addams family members would never enjoy anything so cheery as happiness. The entire extended family will be arriving in two weeks for the traditional Addams coming-of-age ceremony. It involves an intricate dance with the family scimitar, and Pugsley and Gomez are both worried he will not be able to do it. Wednesday, whose long braids are tied up like nooses, asks if she can try going to the public school, where she makes a friend ("Eighth Grade's" Elsie Fisher as Parker) and stands up to a mean girl. This interaction with the "normal" world is intriguing, but quickly abandoned.

Parker's mother, Margaux Needler (Allison Janney) is the star of a home makeover reality show and she is determined to sell the houses in the new Assimilation community (that is the actual name of the town), where children sing, "What's so great about being yourself when you can be like everyone else? It's easy to be happy if you have no choice." Worried that the big, gloomy Addams mansion will affect sales and the ratings of her live special, she plans to give them a makeover, whether they want one or not. And she uses fake profiles on social media to spread lies that frighten the neighbors, just as the Addams relatives arrive for Pugsley's big day. It looks like pitchforks and torches again.

The voice talent does their best with the dialogue, but cannot make it snap like Paul Rudnick's wonderfully witty quips in "Addams Family Values." The artwork for the characters and setting is fun, though never takes advantage of the possibilities of animation when staging the gestures, expressions, or action sequences. And there is an oddly casual resolution with a child deciding to leave home and move in with another family that may lead to some questions. Children will enjoy the upside-down world—where dusting the house means making it dustier, and an invitation to the mall is heard as an invitation to a maul—but even children will understand that the theme of encouraging individual expression would be more compelling if the storyline wasn't so resolutely dull. 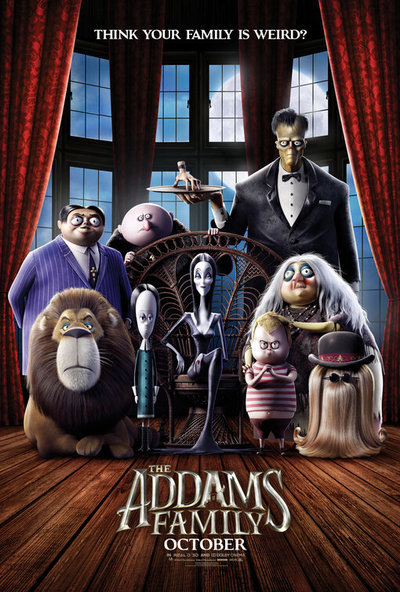