Science fiction author David Brin says there is just one reason for time travel: “Make it didn’t happen.” The idea of correcting, no, preventing one mistake is an irresistible fantasy. And whether it's about protecting the future mother of the only hero who can lead a rebellion against Skynet or making sure your own parents fall in love so that you and your siblings will be born, the movies have given us some of our favorite stories of rescue operations by traveling through time. “The Adam Project” is a popcorn pleasure from the director and the star of last year’s “Free Guy.”

It begins with a banger, indeed one of the banger-iest songs of all time, Spencer Davis Group’s 1966 “Gimme Some Lovin’.” It is not there to tell us where we are in time or anything about rocket ship pilot Adam Reed (Ryan Reynolds). No matter, it’s just there to bring a jolt of energy as we join the story mid-chase. We know Reynolds can play other characters, but here he is what he does most and best, a snarky action hero. “What are you doing, Captain?” the instantly recognizable voice of Catherine Keener asks over speaker. “I think it’s pretty obvious I’m stealing this jet.” We are told that it is 2050 and time travel exists but we don’t know it yet. And we can see that Adam is in trouble. Both he and the ship have been hit. “I’m sorry to interrupt what I’m sure is going to be a really scary threat,” he says as he jams her tracking system and evades capture by escaping through a wormhole that takes him back to 2022.

Meanwhile, in the present, Adam Reed, age 12 (Walker Scobell), is getting suspended for the third time for fighting with a bully. He and his mother (Jennifer Garner as Ellie) are still mourning for Adam’s father, who was killed in a car accident more than a year before, and he is angry about that, about being small for his age, about pretty much everything and so he is very big with the snarky comebacks, even when he knows it means a beating.

Big Adam arrives at Young Adam’s house (his old house), injured, with a damaged ship. Reynolds and Scobell are a terrific match, with the same rhythms, both in observation and in snark. They also have the same scar under their chins and the same watch, their dad’s watch. It does not take long for Young Adam to figure out he is talking to his future self. It takes a little longer for Big Adam to realize that his younger self deserves some compassion. While he tells Young Adam that it is all of the trauma he experiences that will give him the strength and cynicism he relies on as an adult, he learns that maybe a little less trauma will be beneficial to them both.

It also does not take long for the bad guys to arrive, along with two key figures I will not spoil. “The Adam Project” deftly balances the action with the comedy inherent in conflict between the two Adams. Both versions of Adam are exceptionally good at getting on the nerves of everyone around them, and it's fun to see how they are at the same time irritated by and appreciative of each other’s smart-aleck comebacks. Big Adam does not want to be reminded about how unhappy and angry he was as a 12-year-old. Young Adam is as thrilled at the prospect of growing up to look like Ryan Reynolds as he is to learn that there is such a thing as time travel and ride in a real space ship. He does not understand how unhappy and angry his future self is, but we do.

The characters make references to “The Terminator” and “Back to the Future” but the film also draws from the underrated “Frequency” and from stories going back to the myth of Orpheus. And fans of “13 Going on 30” will appreciate seeing Garner and Mark Ruffalo as a devoted couple. (Ruffalo unfortunately does not have any scenes with co-star Zoe Saldaña, who played his wife in the indie gem “Infinitely Polar Bear.”)

The film more than delivers on the promise of its premise with better-than-expected production design from Claude Paré for the futuristic gizmos and special effects by Scanline VFX for the way they are deployed. The action and fight scenes are very well staged, especially one with a tender reunion in the midst of the mayhem. Big Adam’s warming to his younger version gives the story some heart in the midst of the mayhem as well. There is genuine tenderness in his realization that anger does not prevent sadness and that second chances are possible. The action and fantasy are fun, but this is what families will want to talk about after they watch it together. 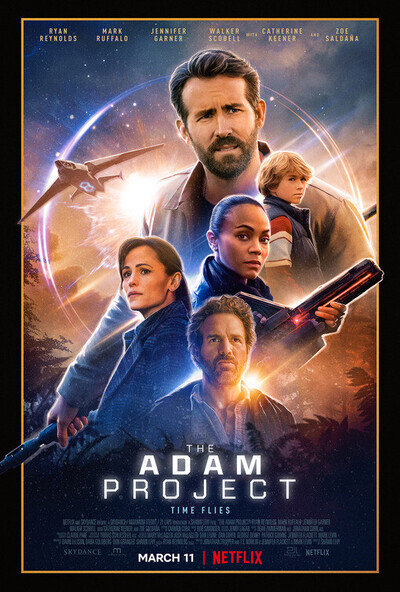