With a title as intriguingly enigmatic as “Infinitely Polar Bear,” it is hard to surmise exactly what awaits plotwise. Rest assured that this is not a documentary that exploits the cute factor of cold-climate animals. Instead, this festival-circuit sleeper is one of those to-be-treasured indie films that revels in real life with all its inherent messiness while sneakily giving your heartstrings a tug.

Not that its star, Mark Ruffalo—who continues to be cinema’s leading purveyor of rumpled bed-headed sexiness, a status he first achieved in 2000’s “You Can Count on Me”—isn’t often cuddly in the extreme. But his rather startling early entrance in this keenly observed and understated late-‘70s-era dramedy about an unconventional mixed-race family and their struggle to stick together initially suggests his unhinged Cam Stuart might be one of the most petrifying patriarchs since Jack Nicholson grabbed an ax in ”The Shining.”

This troubled soul wobbles into view atop a bicycle while wearing bright red undies, a matching headband and nothing else, even though it is winter. Spying distraught wife Maggie (the languid and lovely Zoe Saldana, who for once isn’t sporting a green or blue alien hue) and their two grade-school-age daughters, Amelia and Faith, as they are about to escape in a car, this wild-eyed mad man starts banging on the windshield and yanks out the distributor cap from under the hood. The episode ends with a deflated Cam sitting cross-legged on the ground, emotionally spent and shivering.

A prologue consisting of fuzzy Super 8 home-movie footage already has us expecting the worse as it reveals that Cam, the scion of a once-celebrated blue-blood New England clan, was diagnosed with manic-depressive disorder in 1967. And that Maggie married him anyway, given that everyone was basically a some sort of mental case back in the ‘60s.

However, this extreme meltdown in 1978 lands Cam in a hospital, where such meds as Lithium have left him benign to the point of being comatose and barely able to light his endless chain of cigarettes. When his family visits, it is very sad affair—until one of the girls notices her father’s treatment-induced bloated belly and punches it on a dare. An arcane throwaway line in which he warns her that just such a blow caused Harry Houdini to die suggests there is more to this shaky Cam (and to “Infinitely Polar Bear,” a garbled play on bipolar) than meets the eye.

There is an intoxicating authenticity and welcome low-key humor to what happens during the rest of this episodic story that manages to gently touch upon societal shifts, the class system, corporate sexism and racial identity as it shows how even an emotionally damaged adult can still summon enough caring and devotion be an effective primary caretaker.

That’s not surprising since screenwriter and first-time feature director Maya Forbes based the events on her own childhood in Cambridge, Mass. She and younger sister China, a lead singer for the cocktail-lounge-inspired Pink Martini, were raised by their charismatic though often erratic father while their breadwinner mother went to New York for a year and a half to earn her MBA at Columbia in the hopes of raising her family’s standard of living.

While that decision might be considered an admirable one, it also could be a recipe for disaster given Cam’s regular rage-induced outbursts that are only occasionally tempered by drugs and, as he admits, small sips of beer. Living in a cramped and cluttered apartment with two rambunctious and highly opinionated pre-adolescent girls would test anyone’s patience, although most parents probably wouldn’t leave their kids alone while issuing the warning, “If a rapist knocks, don’t let them in,” before heading out to a late-hours drinking hole.

On top of that, Cam is a little too eager to be friends with the neighbors, offering to not just carry a lady’s laundry but to fold it for her as well. He tends to swan about a bit with a patrician air—of course, he owns a smoking jacket—that is part and parcel of his breeding although complications make his distant family’s wealth mostly off limits. But Cam can also be surprisingly resourceful. He is an ace with fixing gadgets, can make a mean batch of crepes, has a childlike appreciation of playtime, knows martial arts, heals a rift between the girls and bullying neighbor children and even pulls an all-nighter to sew a wonderful flamenco skirt for Faith to wear in her school’s talent show.

Basically, Cam is one of the most entertainingly inappropriate guardians for impressionable youths since Auntie Mame. That’s in large part due to Forbes’ decision to cast Ruffalo, who channels a nervous kinetic energy into his performance that is rightfully grating and ingratiating at the same time without wearing out his welcome. The film is worth seeing just to observe the actor as he masterfully ties a bow tie without a mirror after Cam fails to meet a restaurant’s dress code, all the while carrying on a heated conversation with Maggie.

The novice director also made another wise move by having her own 12-year-old daughter, Imogene Wolodarsky, play Amelia—who is based on Forbes herself. What could be deemed nepotism is instead a perfect fit that results in a magical connection between actress and character. Equally good is Ashley Aufderheide as Faith. While Ruffalo is the main event as his shifting moods swirl around him, we also have to believe that these girls could not only survive such an upbringing but also be surrogate parents to their needy father as well. Mission accomplished.

When it became obvious that the conclusion was nigh, however, I had a reaction that I rarely feel these days. I wasn’t ready to leave this complicated clan behind just yet. I wished that the 88-minute “Infinitely Polar Bear” was longer. This might be the first time ever I knocked off a half of a star from a rating because the ending had arrived too soon. 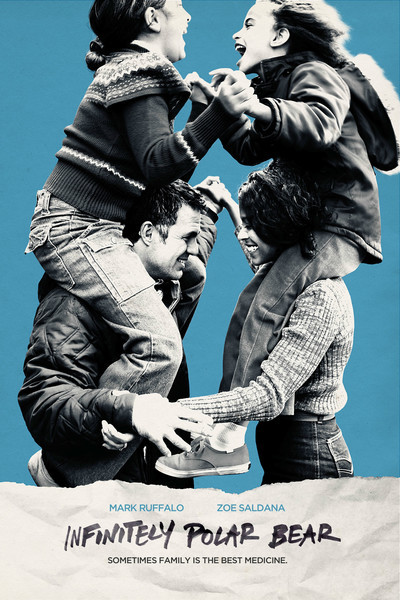