The 9th Life of Louis Drax

“The 9th Life of Louis Drax” is a twisty, Hitchcockian thriller mixed with trippy moments of magical realism. And if that doesn’t sound on paper like it would work, well, it does. And it doesn’t.

French horror director Alexandre Aja (“High Tension,” “The Hills Have Eyes”) tries to juggle a jumble of images and tonal shifts here as he did in his 2014 film “Horns,” which starred Daniel Radcliffe as a young man suspected of murder who literally sprouts horns from his forehead as he accepts his new, devilish role. Radcliffe’s co-star in that movie, Max Minghella, wrote the script for “The 9th Life of Louis Drax” based on the novel by Liz Jensen. Maybe some of the more fantastical ideas worked better in the book; seeing them brought to life on screen, it’s hard not to admire their ambition, even if they don’t always coalesce into a cohesive, satisfying film.

“The 9th Life of Louis Drax” relies heavily, at least in the introductory scene setting, on voiceover from Aiden Longworth as the title character. The smart, strange child describes himself in sardonically perky fashion as “the amazing, accident-prone kid” as we witness his litany of near-death experiences. A chandelier fell on him in his crib when he was an infant. There was an unfortunate incident involving a fork and an electrical socket. But the worst of all—the one that may finally do him in—occurred on his ninth birthday as he was enjoying a picnic with his mother, Natalie (Sarah Gadon), and father, Peter (Aaron Paul).

“Enjoying” isn’t exactly the right word, though, because as we learn from increasingly informative flashbacks, Natalie and Peter are in the midst of a tense separation. “The 9th Life of Louis Drax” tries to keep us on our toes through multiple perspectives and unreliable narrators, constantly challenging us to determine what’s real and what’s imagined. One thing that is for sure: Louis went over a steep cliff that day and is now lying in a coma. The setting—the craggy hills of Marin County, overlooking an eerily cloud-enshrouded San Francisco—is one of many elements that call to mind Hitchcock’s oeuvre. Another is the intriguingly icy presence of Gadon, a blonde femme fatale clad in classic party dresses and capri pants. While Natalie manages to convince everyone around her that she’s a damsel in distress, there’s clearly much more going on beneath her pristine surface.

As the all-business police Detective Dalton (Molly Parker) leads the investigation into the cause of Louis’ fall, she and her team also are searching for Peter, the volatile, hard-drinking dad who disappeared that day. But they must delve into the past to get a complete picture—and that’s where famed neurologist Dr. Allan Pascal comes in. A (mostly) fully clothed Jamie Dornan plays Pascal with understated intelligence and concern, which eventually give way to some questionable personal choices that cloud his judgment. As he uses unorthodox measures to reach Louis, he gets help from the boy’s therapist (a warmly funny Oliver Platt), whom we see sparring with the impudent Louis in flashback. Louis is the kind of precocious, hyper-verbal kid you only see in movies; his darkly amusing observations contrasted with Longworth’s sweet demeanor keep the character from being completely insufferable.

See? Told you there was a lot going on here. And we haven’t even gotten to the sea monster yet.

Yes, there is a sea monster, which might just be the imaginary friend to whom the comatose Louis confesses all his secrets and fears. Or he might represent something deeper—the revelation of which provides the film with an unexpected amount of poignancy.

“The 9th Life of Louis Drax” goes to some daring and dreamlike places, full of lushly colorful wonder and dark, chilling danger, with Patrick Watson’s tinkly score simultaneously suggesting whimsy and menace. Either you’ll be willing to go with some of its wilder visual conceits or you won’t. (I was, for the most part.) But the emotional truth that grounds the film, particularly in the moments between Paul and Longworth as father and son, offset Aja’s iffy flights of fancy. 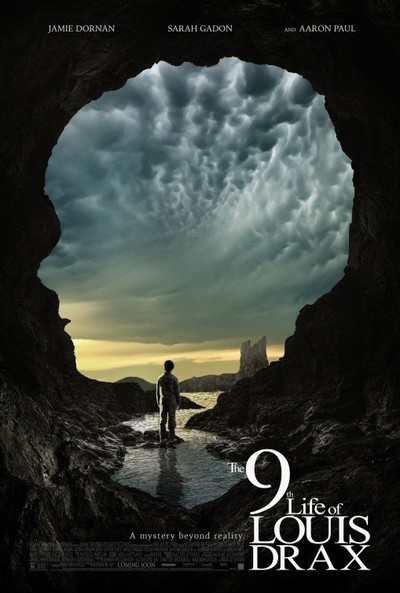 Rated R for some disturbing images and brief strong language.