In a franchise that’s all about traveling to the past and tinkering with the timeline to prevent future tragedies from occurring, it makes perfect sense that the latest “Terminator” movie would engage in some revisionist history of its own.

“Terminator: Dark Fate” exists in a world (and IN A WORLD … to borrow from the late, great trailer narrator Don LaFontaine) where the previous three films in the series never even existed. Director Tim Miller, working from a script by David S. Goyer & Justin Rhodes and Billy Ray, picks up where the high-tech game-changer “Terminator 2: Judgment Day” left off in 1991. It’s as if we never had to slog through “Terminator 3: Rise of the Machines” (2003), “Terminator Salvation” (2009) and “Terminator Genisys” (2015). (If only we could get that time back, too.)

This is an inspired idea, one born of ingenuity as well as pure survival instincts. This was an action franchise of mythological proportions that was steadily dying. It’s enough to make you wish the filmmakers had explored this approach for more than relentless action and empty fan service. “Dark Fate” recycles images, visual effects and even dialogue from the previous movies, including lines that have been uttered so many times in so many other pop-culture contexts that they now elicit groans within the confines of an actual “Terminator” setting. Sure, it’s great to see Linda Hamilton back, swaggering and kicking ass in the defining role of her career as Sarah Connor. But now she’s the one who gets to say “I’ll be back” (it’s hilarious!) as well as some other painfully clunky lines like: “I hunt Terminators. And I drink ‘til I black out.”

Hamilton deserves better. So do the other strong women who make up the film’s trio of warriors, fighting to protect each other and all of humanity from technological destruction. Again.

This time, in a present day where the machines haven’t taken over (yet), a woman drops from the sky in a glowing blue orb, naked but otherwise ready for her mission. Her name is Grace (a formidable Mackenzie Davis), she’s an “augmented” human soldier from the future and she’s arrived in Mexico City to keep a seemingly ordinary young woman from being killed. Dani Ramos (Natalia Reyes) is an upbeat auto factory worker whose mundane life gets turned upside down—sometimes literally—when an unstoppable machine of death comes after her.

He is the Rev-9 (a suitably stoic Gabriel Luna), the latest Terminator model, with all the ferocious fighting skills and morphing abilities of the T-1000 and then some. He can take a shotgun blast to the head and heal to perfection within seconds. He car turn his arms into spears, sledgehammers, guns, whatever weapons he needs with a mere flick of the wrist. He can get obliterated in a blast, his limbs scattered hither and yon, only to have them melt into gooey, black puddles that scurry across the floor to recreate his shape once more. (He’s like The Blob, only super evil.) He even has a skeleton that separates from his exterior, so he can fly a helicopter in the sky AND battle puny humans on the ground simultaneously.

Cool ideas all, and exciting improvements on the digital wizardry that dazzled us nearly three decades ago. The visual effects are consistently the strongest part of “Dark Fate.” But they’re in the service of a blockbuster that is relentless in its one-note intensity. Miller, who achieved a far more pleasing balance of action and comedy with the first “Deadpool” movie, functions here at a single, frenetic speed for two solid hours, and it is exhausting. The first, big fight scene between Grace and the Rev-9 is full of inventive, acrobatic choreography, and Miller and Oscar-nominated editor Julian Clarke were wise to let big sections of choreography play out. But eventually, the fact that the Rev-9 just keeps coming, over and over again, without the slightest trace of weakness or vulnerability grows repetitive and tedious.

Even when Sarah Connor shows up out of nowhere in the midst of a lengthy, heart-pounding car chase to blow stuff up and then walk away without looking at it, she heightens the sense of anxiety, despite the arsenal in her truck and her detached, been-there-done-that demeanor. Hamilton looks fierce as ever but she’s stuck explaining things to her fellow female cohorts through inane expository dialogue that’s both haranguing and blasé. Sarah was Dani once—she understands the young woman’s confusion over her sudden sense of importance as well as the paranoia that fuels the group’s every move.

Then just when it seems so refreshing to have not one but a group of strong women at the center of an extreme (and extremely violent) action picture—part of a behemoth franchise about preventing the apocalypse—along comes Arnold Schwarzenegger to save the day. Because you couldn’t reboot the franchise without the original Terminator, theoretically. He said he’d be back, after all. But while it’s hugely amusing to discover where he’s been and what he’s been doing all this time, his banter with Sarah Connor is less than snappy.

And it is sort of depressing in the end to find the film putting these badass ladies in the position of needing rescue from a man—even if he is an android—when they were doing just fine on their own, thank you very much. 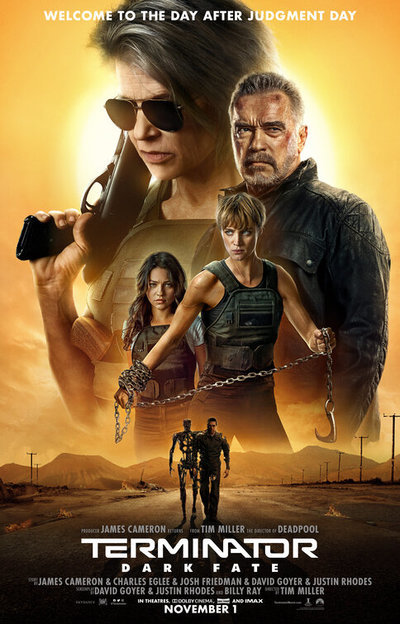 Rated R for violence throughout, language and brief nudity.

Arnold Schwarzenegger as Carl / The Terminator