I’m a true believer in the power of a great pop song. Often derided throughout culture (even in a film like “A Star is Born”), pop music can truly express emotion in ways that other art forms do not. The hook disguises the depth, allowing a great emotional undercurrent to reach people in a way other music genres do not. People who write off pop music as disposable simply haven’t heard good pop music. One of the best qualities of Max Minghella’s directorial debut “Teen Spirit” is that it understands the transformative power of a great pop song and uses music by artists like Robyn and Annie Lennox to amplify that theme. Sadly, the film doesn’t live up to the depth of the music that seems to have inspired its existence. Yes, a song like “Dancing on My Own” can inspire someone to follow their dreams and become a pop star, but there’s not enough to “Teen Spirit” beyond that observation—and anyone who’s heard Robyn knows that already.

The great Elle Fanning plays Violet, a Polish teenager living on the Isle of Wight with her single mother. She works a job she hates, sulks through school, and generally seems to detest her life. But she sings at an open mic occasionally, and she has a beautiful voice—Fanning did all of her own singing and she does a phenomenal job with the music, further proving she can do pretty much anything. It’s one of those dingy bars in which the person on stage is lucky if even one of the audience members claps. This is not Ally at the club meeting Jackson Maine like in "A Star is Born." This is a young lady expressing herself to an audience that barely cares. Except there is one person that claps.

That person is a retired opera singer named Vlad (Zlatko Buric), who recognizes Violet’s talent. When a singing competition show a la “American Idol” comes to town, Violet asks Vlad to be her manager/guardian, scared to ask her mom to help. She tries out for the show, and makes it through the first few rounds, which means she’s headed to London for the live TV broadcast, at which point the country will decide her fate. Violet is clearly remarkably talented, and she’s quickly forced to navigate the tricky waters of impending fame to make sure her career doesn’t end before it begins.

The biggest problem with “Teen Spirit” involves the stakes. There aren’t many. We don’t get to know Violet well enough to be overly concerned about her fate. I like Elle Fanning a great deal, and she doesn’t do anything wrong here, bringing more depth and charisma to the part than most other actresses would have, but Minghella never figures out how to get us invested in Violet’s story. It’s the kind of storytelling for which the word ‘generic’ depressingly applies. Violet is a likable character, especially in the hands of one of our most likable actresses, but that’s literally about all that “Teen Spirit” has to offer. It doesn’t have the social commentary of “Vox Lux” or the high melodrama of “A Star is Born,” leaving us with almost nothing in their place. "Teen Spirit" is simply the story of a talented girl who finds a way to use said talents.

It doesn’t help that Minghella can’t figure out exactly what story he’s telling, and he relies way too heavily on music video techniques every time Violet sings. Fanning opens her mouth, a rendition of a pop song that would get four chairs on “The Voice” comes out, and the film comes to life, often cutting together footage of her mundane life that led her to this point. They are literally music videos. And then the film sinks again into characters that are impossible to care about until its time for the next music video, even if Buric does a solid job as the most surprising and really the only character in the film with any depth whatsoever on the page. Minghella also bungles the big scenes visually. There’s never been a televised singing competition this poorly lit and even J.J. Abrams would tell him to chill with the lens flare.

Critics of shows like “The Voice” often write them off as flashy karaoke competitions. “Teen Spirit” almost seems to embrace this criticism, serving more as a reminder of great pop songs like Sigrid’s “Don’t Kill My Vibe” or Ellie Goulding’s “Lights” than a competent piece of storytelling on its own. This is going to sound cruel, but it’s never a good sign when it feels like listening to a film’s soundtrack could accomplish the same goal as watching the film itself.

This review was filed from the South by Southwest Film Festival on March 12th. 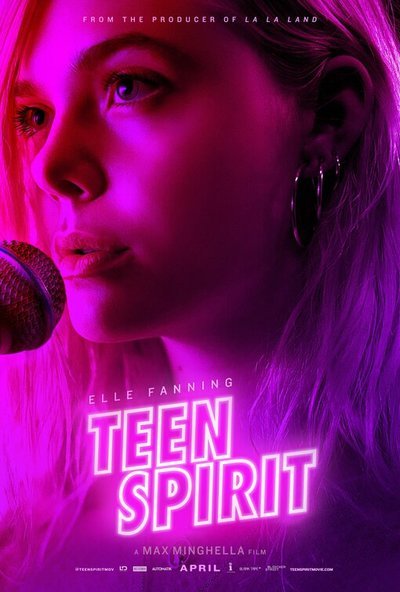 Rated PG-13 for some suggestive content, and for teen drinking and smoking.