The moment is unnerving: 15-year-old Celeste (Raffey Cassidy) lies in bed with a man she just met, a man much older than she is who is drifting in and out of pill-induced unconsciousness. A piece of silver fabric is wrapped around her throat, and her eyes are smudged with mascara. She looks very young and very tired, staring at the camera, delivering a monologue in a flat New York-accented voice, about how she loves pop music because "I don't want people to think too much. I just want them to feel good." She speaks of her recurring dream where she's careening through a long tunnel towards an unknown and probably bad destination, and her vision of a kind of music that makes it all go away. "Vox Lux," written and directed by Brady Corbet, whose "The Childhood of a Leader" was one of the best films of 2016, mixes small quiet moments like this with hyper-stylized sequences, raw emotional confrontations, music videos, plus an entire concert, complete with backup dancers and a chanting cult-like audience. The film is an onslaught, sometimes silly, sometimes profound, but always riveting and emotional, and dazzlingly sure of itself.

How Celeste came to be a famous pop singer takes up the first half of the film (star Natalie Portman doesn't even appear until an hour in). Celeste is introduced by a voiceover, given by an immediately recognizable voice. The voiceover keeps reappearing, interjecting commentary (social and political), loading down the film with a sense of portent, almost dread. "Her loss of innocence mirrored that of the nation." "She was prisoner of a gaudy and unlivable present." It's like a college term-paper from a student who takes Britney Spears very seriously. But Britney Spears can be a serious topic, especially when considered as cultural phenomena. "At least she wrote her own lyrics," says the voiceover, sounding defensive on her behalf. Unlike Britney Spears or Madonna or Katy Perry, Celeste came to fame through a tragic event (shown in the absolutely terrifying first scene), which launched her into a national spotlight. She is then pounced on by a manager (Jude Law) and a record label executive (Jennifer Ehle), who look at her and see dollar signs. Celeste's older sister Eleanor (Stacy Martin) does her best to protect her sister, who is, after all, only 14 years old when all this happens. But the music industry is not known for protecting the innocence of its young stars. "Vox Lux" gives a visceral sense of what overnight fame must actually feel like to those who experience it, the sped-up nature of time, how the earth falls away beneath your feet.

When Natalie Portman steps into the movie as Celeste 17 years years later, still famous, still with silver fabric around her throat, you never doubt she is the grownup version of the teenager toughened by trauma and experience when she was so young. Celeste is now struggling to repair her reputation after a series of scandals. While preparing for a concert in her home town on Staten Island, she spirals into a panic. Celeste lives a life incomprehensible to most people, but it's normal to her. Everything she does is honest, and this makes her a nightmare, and yet also irresistible. She whip-saws from tenderness to rage to tears, and she means all of it, so everyone around her, including her teenage daughter (also played by Cassidy), rides that roller-coaster. Whether she's slurping white wine from a plastic cup at a diner, not letting her daughter get a word in edgewise, flipping out when a journalist asks a forbidden question, or collapsing into sobs before a show, Portman rides the unpredictable rhythms of Celeste's life. It's not an ingratiating performance, nor is it careful. Portman is in a really interesting zone here, fearless in a way that feels reckless. She's really out there on the edge, where she belongs.

Even with the buzz surrounding the film, I managed to go into "Vox Lux" almost cold. All I knew were four names: Portman, Corbet, and music by two wildly different artists, Scott Walker (not the outgoing Governor of Wisconsin) and Sia, the Australian singer/songwriter. An intriguing mix, in particular the Scott Walker-Sia combination. Scott Walker also composed the score for "The Childhood of a Leader," so his work with Corbet is already a fascinating collaboration. Walker is a famously reclusive artist, with a career going back to the 1950s, followed by many twists and turns and long silences between albums. His music, experimental, sometimes difficult, could be seen as antithetical to what Celeste represents (although he began as a pop teen idol himself). Walker's magnificent and huge score gives the film a wintry grandeur, making familiar sites like Manhattan buildings seem archaic and strange, relics of a long-gone world, or threatening manifestations of current-day monsters. Celeste's pop songs, written by Sia, and performed by Portman, are "anthems" about self-empowerment and survival, filled with catchy hooks, and totally believable as hits. The contrast with Walker's moody gigantic orchestrations could not be more acute, and it destabilizes the entire landscape.

There isn't a real plot, and what happens is conventional, familiar from every perils-of-celebrity movie you can think of. There are many long scenes of people talking to each other, Celeste and her daughter, Celeste and Eleanor, Celeste and her manager. There's not an uninteresting moment in the whole thing. "Vox Lux" is disorienting and ambitious, reaching for operatic Big Picture commentary (which sometimes works, sometimes doesn't), but fascinated by the people living clustered in the bell jar of Celeste's fame.

What is most fascinating about all of this is what is left out, what remains unsaid, barely present. Celeste's fame started by accident. She could have been a flash in the pan. Instead, she has endured. Her fans fill stadiums. But what does her fame mean to her? Hers is not the drive of a talented genius who must be onstage in order to feel alive (like Bette Midler in "The Rose," for example). It's unclear what Celeste wants, what she gets from being famous, from performing, but the film's power is in those gaps, it's in her blank eyes behind the sparkly half-mask, one of her signatures as a star, it's in her passive acceptance of fame when it comes, and how ferociously she hangs onto it. "Vox Lux" gripped me from its first sequence and didn't let go until the end. I was left drained, but also feeling a little bit empty. This is not a complaint. The hollowed-out sensation "Vox Lux" gave me, especially its final sequence, was far more interesting to me than something clearly laid-out, with a message or a resolution. "I don't want people to think too much. I just want them to feel good," says 15-year-old Celeste. It occurs to me that the effect of "Vox Lux" was exactly the opposite. 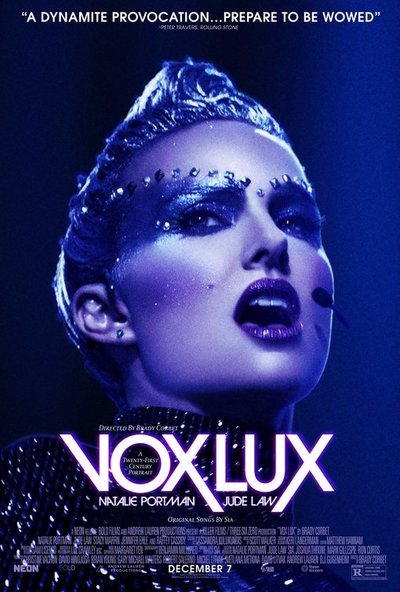 Rated R for language, some strong violence, and drug content.

Jude Law as The Manager