There are few modes of healing as cathartic as sharing one’s truth through the prism of art. It was the world of avant-garde theatre in New York that first enabled filmmaker Deborah Kampmeier to explore the abuse she endured while growing up in the South. Her first three movies center on heroines who share the psyche of their creator, forming a trilogy that chronicles the horror of rape and the process embarked upon by survivors to reclaim their wholeness. Kampmeier’s 2003 debut feature, “Virgin,” was widely praised for its portrayal of a devoutly religious teen (played in a Spirit Award-nominated performance by Elisabeth Moss) who believes she was impregnated by God, a conviction that deeply disturbs her Baptist family. The director herself faced a similar rage when her 2007 follow-up, “Hounddog,” triggered a fierce backlash upon its premiere at Sundance, not unlike the chilly, profanity-laced reception given to Jennifer Kent’s criminally under-appreciated masterwork “The Nightingale” last year in Venice. Both films gained notoriety for their uncompromising depiction of rape in which the focus is placed not on exploitative nudity but on the brutal violation reflected in the victim’s face. Violence against women has been perpetuated so often in cinema that studio executives barely flinch at it, yet when the female experience is foregrounded in all of its raw intensity, it almost always winds up blacklisted.

Kampmeier’s work foreshadowed the rise of the #MeToo movement well over a decade before it began overturning patriarchal norms in Hollywood, which makes it all the more appropriate that her latest film, “Tape,” would be released just two weeks following the sentencing of Harvey Weinstein. In many ways, it serves as the second half to an impeccable double bill with Kitty Green’s “The Assistant,” where the titular young female employee, Jane (Julia Garner), suspects that her boss, an unseen Weinstein-esque mogul, is abusing his power, the traces of which register as subtle yet unmistakably toxic red flags. All Jane can do, in the end, is gaze up at the window of her boss’ office, wondering what crimes might be occurring behind its walls. “Tape” kicks down the office door, so to speak, by taking the viewer step by excruciating step through one woman’s experiences of having her trust betrayed. Whereas Green’s script was informed by numerous interviews conducted with women who had worked for Weinstein, “Tape” is based on the real story of its co-star/producer Annarosa Mudd, who was taken advantage of on-camera by a producer after hours of insidious coercion during a screen test. Mudd’s choice to come out publicly about what happened to her is a courageous one, and it adds even more layers of poignance and meaning to what is already, on its own terms, a powerful and essential film.

Just as Kampmeier’s little-seen third feature, 2016’s sublime “Split,” enabled its abused heroine (Amy Ferguson) to participate in a play that externalized her emotional journey, “Tape” provides Mudd with the opportunity to peer into her own past as lived by the character of Pearl (Isabelle Fuhrman). The entire picture hinges on the performance of Fuhrman, who has displayed exceptional range in everything from creepy thrillers (“Orphan”) to whimsical coming-of-age comedies (“Dear Eleanor”), and she is nothing short of a revelation. For large stretches of the film, Pearl is determined to rein in her feelings while putting on a brave face for the producer, Lux (Tarek Bishara), who has offered to audition her for his esteemed protégé program, though not before initially rejecting her. Only when alone in her apartment is she able to fully remove the mask. There is a wrenching scene where Pearl bursts into tears when talking on the phone with her mom, whom she wants to support financially, all the while shoveling down mouthfuls of cake that she intends on promptly throwing up. After completing the ritual, she stares at her reflection in the mirror and begins to kiss her hand, as if attempting to make peace with a body that has weathered the cruel expectations of an objectifying industry. Occupying the periphery of her narrative is Mudd’s character of Rosa, an actress previously targeted by Lux, who intends on secretly taping his screen test with Pearl in order to bring him down. Kampmeier juxtaposes Pearl’s tearful monologue on the phone with footage of Mudd on her laptop in Times Square, deftly illustrating how both women share a commonality in their mutual isolation.

Like all skilled predators, Lux knows precisely how to alienate his prey from the rest of the group, insisting that he’s the only one who understands them and is therefore solely capable of making their dreams come true. He goes out of his way to appear normal, making friends with a guy at the local coffee shop where he plans on meeting Pearl. The empty, authoritative terms—“Sprezzatura!” “Claim your power!”—he spews are like a shield, clouding the air with white noise as a diversion from his true intentions. “Tape” is an intentionally challenging film to watch, and for its first half hour or so, that is primarily due to its fragmented visual style. In addition to viewing the action from a more straightforward audience perspective, Kampmeier and cinematographer Valentina Caniglia fluctuate between the male gaze of Lux’s camera and the hidden lens kept by Rosa, which represents the female experience that often proves elusive. The cocktail of confusion and tremulous faith that guides Pearl toward Lux’s lair is suggested by the blurring of Rosa’s camera as it struggles to bring the deceptively innocent interactions, and all the unwelcome memories they resurrect, into focus. Once Pearl’s one-on-one audition with Lux begins around the film’s midpoint, the visuals take on a piercing clarity, while Mikaela Martin’s production design brilliantly mirrors the disorientation felt by abuse victims as their world grows increasingly smaller. The dingy brick walls of Lux’s audition space form a towering barrier blocking any view of the outside world, aside from thin windows placed near the ceiling that chart how quickly the sun appears to have sunk below the horizon.

What makes this nearly 40-minute sequence so ingenious is how it is staged like a theatrical production, with Lux going through the motions of his routine lines as they are mouthed by Rosa—who knows them all too well—behind the scenes, watching from her laptop while perched in the alley. Rosa’s warrior-like attire pays homage to Lavinia in Titus Andronicus, while a shot of menstrual blood seeping through the sheets and onto Lux’s mattress calls to mind another Shakespeare classic, namely the “Out, damn spot!” monologue from Macbeth, a play that Fuhrman performed to perfection last year Off-Broadway. The wall that Rosa leans against in the alley splits conspicuously down the middle of the frame, recalling one of the defining themes of Kampmeier’s oeuvre, namely the reclamation of self when our sexuality and power are robbed from us. The split that resided within Mudd manifests itself in the parallel stories of Pearl and Rosa, who respectively embody the actress’ past and present selves. By looking directly into Pearl’s eyes via the concealed camera and seeing her own disillusionment and bewilderment reflected within them, Rosa is able to free herself from the prison of unearned shame, in much the same way that Mudd felt “less stupid” after seeing Fuhrman’s performance. When the two women finally embrace, the moment is tantamount to any survivor of abuse—many of which we hear from in the film’s final moments—achieving a newfound sense of wholeness through the empowering strength of community. “Tape” isn’t just a movie. It is a rallying cry. 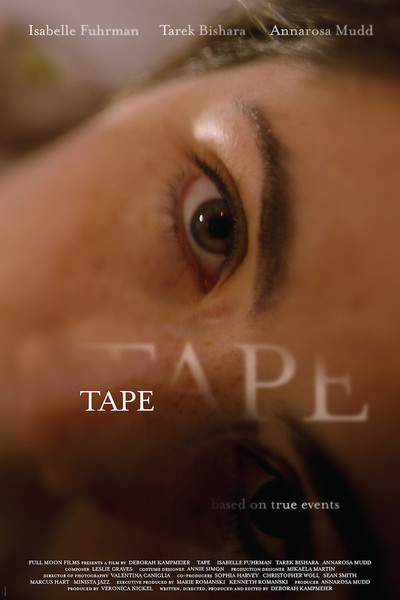