You never see the boss in full in "The Assistant." At the most, he is a dark blur passing in front of the camera on his way somewhere (he's always on his way somewhere). Other than that: his voice is heard through the door, through the thin office walls, through the phone: you can hear the tone, but the words are always garbled. You never see his face. And yet he hovers over every scene like a dark thick cloud, creating an atmosphere—threatening, tense—even in his absence (and he is mostly absent). It's probably more accurate to say he is the atmosphere. He is never referred to by name, even though every conversation is about him. He is referred to just as "he." Although this is never commented on explicitly, by the characters in "The Assistant," or by the talented filmmaker Kitty Green, who wrote and directed the film, the constant references to "He" (no name necessary) is a pointed commentary. Being referred to as "He" where no one ever asks "Who are you talking about?" ... that's Power. "The Assistant," a very good film, is especially good on power dynamics.

Julia Garner plays Jane, an assistant at a movie production company (obviously modeled on Miramax), located in a couple of buildings in lower Manhattan. Jane has only been on the job for 5 weeks, and is fully acclimated (or indoctrinated) to the semi-terrifying office culture. The new kid on the block, she gets the "shit detail" of handling travel arrangements, greeting guests, bringing danishes into conference rooms, and then sweeping up the danish crumbs afterwards. The hours are long. She expected it. It is a great company and a tremendous opportunity for her. She works side by side with two other assistants (both men), and occasionally has to go up to other floors to pass out new script drafts for upcoming projects. "The Assistant" takes place during one very long day, when Jane comes to sense that something may be "off," with her boss for sure, but also in the company he created, and an environment that protects/ignores/denies what is really going on.

"The Assistant" works through inference, mostly, during its detailed deep-dive into Jane's mundane everyday tasks performed in an atmosphere heavy with subtext, dropped hints, missing pieces, stray details that may be ominous or may be nothing at all since the larger picture is both obvious and obscured, simultaneously. This is such a good approach, and way easier said than done. Green narrows the point of view so severely that we are solely in Jane's experience. In literary terms, it's close first-person. And so you hear fragments of conversation in passing, or if Jane's mind is on something else, then the conversations taking place right next to her are muted, distorted. This is such an effective approach to the explosive topic of corruption, abuse of power, and what might be called an "unfriendly" (putting it mildly) work environment. Big things go on behind closed doors, or off-screen, or at a fancy hotel uptown ... but it's hard to point to what exactly might be wrong. It's just a feeling, and everybody in the office shares it. The absent boss is mocked openly when he's not around, and yet still Jane kow-tows to him when she writes not one, but two, apology emails to him over the course of the day.

But what IS going on? The confusion surrounding this question comes to the surface in a crucial scene midway through when Jane decides to go talk with Wilcock (Matthew Macfadyen) in Human Resources, to try to tell him what she has seen, and why she thinks is wrong. This is such a well-written scene, and so beautifully performed by both actors, I already need to see it again to dig into all of its implications.

Green maintains strict control over how she tells the story, and it's really something to behold. By imposing limits—through the narrow point of view, through never succumbing to the impulse to explain or underline or even show—Green reveals herself to be a narrative filmmaker of considerable power. Green has directed two documentaries ("Ukraine Is Not a Brothel," "Casting JonBenet"), and used the form to interrogate objectivity, bringing a critical eye to the forming of certain narratives, playing around with the rules of the game in ways disturbing and fresh.

After the Weinstein scandal broke, Green spent a year or so interviewing people about the culture at Miramax. Everybody knows that if you want the truth about What It's Like to work somewhere, anywhere, ask the administrative assistants. They know everything. Multiple scenes in "The Assistant" take place in elevators, and the elevator behavior alone warrants a dissertation! Do you make eye contact in an elevator? Is chit-chat okay? Probably not, but the awkward silence is even worse. It's good manners to let a woman get off the elevator first, but is her woman-status secondary to your status as a Big-wig executive? Green is so good with stuff like this! An entire world is on display in those elevator scenes. If you've worked in an office—and I've worked in many—all of these small moments ring so true you almost cringe in recognition.

The expressive face of Julia Garner ("The Americans," "Ozark," "Dirty John") is central here. Every thought, every emotion, every single thing Jane thinks and then chooses not to say, is crucial in building the tension in "The Assistant." Much of the film involves close-ups where we watch her think. It's riveting. So many films over-explain themselves, so many scripts make sure they lead us by the hand, so many films don't trust us as viewers. In "Bombshell," a shallow film about the downfall of Roger Ailes, Fox News commentator Megyn Kelly (Charlize Theron) looks right at the camera, telling us how things operated at the network. In the same film, Kate McKinnon's character also has a monologue, looping us into the modus operandi of that hermetically-sealed sick world. These monologues "catch us up." "The Assistant" doesn't go that route, and it is a far stronger film for it. Instead, we just hear the whispers, murmurs, snickers; we hear the tail-end of conversations and we put two and two together, just as Jane does. We know that an earring on the floor isn't enough to bring down a bad man. But we also know that Jane senses correctly. Something is very very wrong. 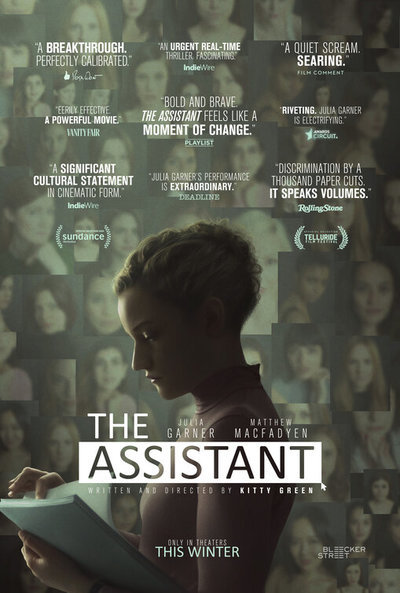