It's been five years since Jennifer Kent's debut film, "The Babadook," which quickly took its place as one of the most effective horror movies in recent memory. It played for months here in New York, a rare occurrence for an indie film from a first-time writer/director. Kent's capacious imagination and compassion drove "The Babadook," with its focus on a mother and son doing battle with a supernatural-style "intruder." The film worked on multiple levels, buzzing with potent ambivalent metaphors for grief, insomnia, parenting (especially single parenting, as well as parenting a so-called "difficult" child). It was a hugely impressive debut. Kent’s follow-up, "The Nightingale," is a completely different sort of film, with its own kind of horrors, different horrors, that of the ravages of colonialism, its violence, rape and murder. The film is filled with brutality from start to finish, over its grueling run-time ("The Nightingale" feels much longer than it is). "The Nightingale" has already caused controversies at festivals, where people walked out, outraged at the multiple violent rape scenes.

The issue with "The Nightingale" isn't its violence, nor its portrayal of rape. The violence is appropriate (and the film is appropriately difficult to watch). The issue is the subtext-less script. Having no subtext flattens out the action, creating a same-ness in the scene progression. Part of this feels appropriate to the lead character's PTSD; she is traumatized beyond nuanced responses. But somehow, when translated into visual form, the effect is deadening. The script has this weird mix of rigidity and flabbiness, especially in the final sequences which are repetitive and stagnant. While "The Nightingale" is obviously a labor of - if not love, then rage - for Kent, it left me cold, even with the two wonderful performances at its center from Aisling Franciosi and Baykali Ganambarr.

Franciosi plays Claire, a young Irish convict in 1825 colonial-era Australia, when British troops are in the process of putting down rebellions, subduing the locals, perpetuating a genocide on the Aboriginal population. Claire is imprisoned by Lieutenant Hawkins (Sam Claflin), who refuses to release her from bondage (it's three years overdue). Hawkins forces her to sing for his soldiers, she's known as "the nightingale." Hawkins parades her out in front of his heckling ogling men. Within the first 10 minutes of the film, Hawkins brutally rapes Claire. Kent shows a sensitivity to the issues with such scenes: so often rape is sexualized in film, so often the violence is eroticized, the trauma doesn't translate. Kent has thought deeply about how to portray Claire's brutalization (there's one shot of the cross-thatched ceiling which is particularly effective).

Eventually, Hawkins and two of his goons commit an unpardonable and horrifying act (one of many throughout "The Nightingale") and Claire, hellbent on revenge, chases after them on their journey overland to a nearby town. For this she needs a guide through the inhospitable wilderness, and she hires Billy (Ganambarr), who needs the money and hates white people (they've killed his whole family). He has no patience with her whimsies or her racism, but warms to her a little bit when she tells him she's Irish: she hates the English as much as he does. The transformation of their relationship from adversaries to allies is the real trajectory of the film, although, as I mentioned, there's a plodding same-ness to these scenes, a circular quality. Both Franciosi and Ganambarr are amazing, but Ganambarr is especially, considering this is his first credit! Billy revealing that his nickname is "the blackbird," like hers is "the nightingale," and that he, too, sings. This is an example of the rigid handling of potential metaphors. Everything stays on the surface. Maybe that's deliberate, but it's tough going at almost two and a half hours.

This is not a "rape revenge" movie, although Claire quivers with such blood-lust she does become a kind of avenging angel. The way "The Nightingale" eventually goes is very intriguing, but it comes so late in the game there's something undeveloped about it, un-shaped, it's almost like a first draft. Is there something there about violence being passed on through generations, soaking into the mud, staining the trees, poisoning the air? Whatever it is, and whatever Billy's role in it, doesn't really gel together.

Shot by Radek Ladczuk (who also shot "The Babadook"), "The Nightingale" was probably an extremely grueling shoot. There are almost no interiors. The jungles and mountains crowd thickly against the camera, and there is barely a "view" in sight. This is no "Walkabout," Nicolas Roeg's film where two kids wander through the outback, dwarfed by huge spaces around them. It's no "Shame," where Bergman thrusts you into chaos and trauma in such a visceral way it's impossible not to imagine yourself in the characters' shoes. The world of "The Nightingale" is crowded, leafy, rank and moldy. The stars look extremely far away. Dead bodies dangle from the trees. Sheep lie dead in the yard. Buildings are in flames. Kent does give a sense of the tyranny of colonialism, but none of the metaphors - all of which have potential - are explored. Metaphors like the night sky, the shadows, the landscape, violence and music, birds. These things are all presented but left unexplored. 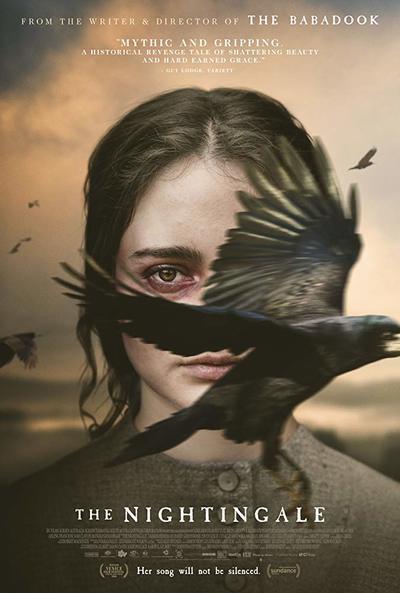 Rated R for strong violent and disturbing content including rape, language throughout, and brief sexuality.