Within the process of watching an M. Night Shyamalan film, there exists a parallel and simultaneous process of searching for its inevitable twist. This has been true of every film the writer-director has made since his surprise smash debut, “The Sixth Sense,” nearly two decades ago. We wonder: How will he dazzle us? What clues should we be searching for? Will it actually work this time?

Increasingly, with middling efforts like “The Village” and “Lady in the Water”—and dreary aberrations like “The Last Airbender” and “After Earth,” which bore none of his signature style—the answer to that last question has been: Not really. Which makes his latest, “Split,” such an exciting return to form. A rare, straight-up horror film from Shyamalan, “Split” is a thrilling reminder of what a technical master he can be. All his virtuoso camerawork is on display: his lifelong, loving homage to Alfred Hitchcock, which includes, as always, inserting himself in a cameo. And the twist—that there is no Big Twist—is one of the most refreshing parts of all.

“Split” is more lean and taut in its narrative and pace than we’ve seen from Shyamalan lately. Despite its nearly two-hour running time, it feels like it’s in constant forward motion, even when it flashes backward to provide perspective.

It’s as if there’s a spring in his step, even as he wallows in grunge. And a lot of that has to do with the tour-de-force performance from James McAvoy as a kidnapper named Kevin juggling two-dozen distinct personalities.

From obsessive-compulsive maintenance man Dennis to playful, 9-year-old Hedwig to prim, British Patricia to flamboyant, New York fashionista Barry, McAvoy brings all these characters to life in undeniably hammy yet entertaining ways. There’s a lot of scenery chewing going on here, but it’s a performance that also showcases McAvoy’s great agility and precision. He has to make changes both big and small, sometimes in the same breath, and it’s a hugely engaging spectacle to behold.

His portrayal of this troubled soul is darkly funny but also unexpectedly sad. Kevin is menacing no matter which personality in control, but the underlying childhood trauma that caused him to create these alter egos as a means of defense clearly still haunts him as a grown man. Flashes of vulnerability and fragility reveal themselves in the film’s third act, providing an entirely different kind of disturbing tone.

First, though, there is the abduction, which Shyamalan stages in efficient, gripping fashion. Three high school girls get in a car after a birthday party at the mall: pretty, chatty Claire (Haley Lu Richardson of “The Edge of Seventeen”) and Marcia (Jessica Sula) and shy, quiet Casey (Anya Taylor-Joy), who was invited along out of pity. But they quickly realize the man behind the wheel isn’t Claire’s dad—it’s Kevin, who wastes no time in knocking them out and dragging them back to his makeshift, underground lair.

Repeated visits from Kevin, with his varying voices and personae, gradually make it clear that their kidnapper harbors multiple personalities. Only Casey, who emerges as the trio’s clever leader, has the audacity to engage with him. As she showed in her breakout role in “The Witch” as well as in “Morgan,” Taylor-Joy can be chilling in absolute stillness with her wide, almond eyes—as much as McAvoy is in his showiness. She makes Casey more than your typical horror heroine to root for, particularly with the help of quietly suspenseful flashbacks that indicate how she acquired her survival instincts. Her co-stars aren’t afforded nearly as much characterization or clothing, for that matter.

But we also get a greater understanding of Kevin’s mental state through the daily sessions he (or, rather, a version of him) schedules with his psychologist, Dr. Fletcher (an elegant and soulful Betty Buckley). A leading researcher in the field, she believes having dissociative identity disorder is actually a reflection of the brain’s vast potential rather than a disability. Their conversations, while exquisitely tense, also provide a welcome source of kindness amid the brutality.

And they help us put together the pieces of this puzzle—which is actually a few different puzzles at once. There’s the question of what Kevin wants with these girls. There’s the question of how they’ll escape. But the fundamentally frightening element of this whole scenario is how the various personalities interact with each other—how they manipulate and intimidate each other—and whether there’s an even more fearsome force gaining strength.

West Dylan Thordson’s score and an expertly creepy sound design help make “Split” an unsettling experience from the very start. But the movie staggers a bit toward the end with some contrivances and coincidences, and it goes in directions that feel a bit exploitative—as if it’s wringing childhood abuse for cheap thrills. I’m still wrestling with how I feel about it, but I know I walked out with a slightly icky sense, even as I found the film engrossing both technically and dramatically.

Still, it’s exciting to see Shyamalan on such confident footing once more, all these years later. Make sure you stay in your seat until the absolute end to see what other tricks he may have up his sleeve. 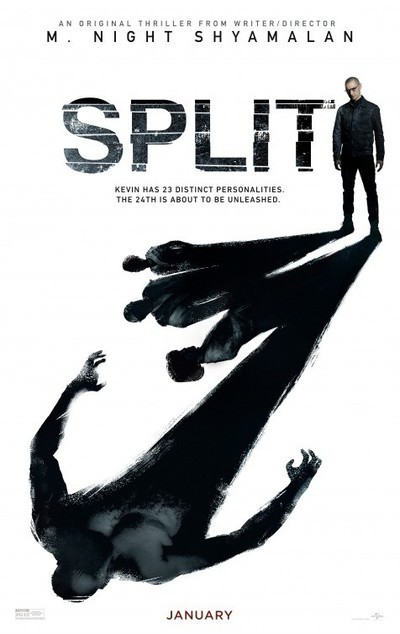 Rated PG-13 for disturbing thematic content and behavior, violence and some language.