The Italian filmmaker Matteo Garrone does not sit still. His movies have confronted an unusual variety of topics and themes, from eating disorders to reality television. The 2008 film that introduced him to international audiences, “Gomorrah,” was a remarkable adaptation of a non-fiction book, depicting ironic and harrowing tales of Italian organized crime with a kind of electrified realism. With his latest, “Tale of Tales,” Garrone’s assuredness gets the better of him.

“Gomorrah” depicted the squalid underbelly of 20th-century Neapolitan culture; for this film, Garrone goes back to a 17th-Century writer from Naples, Giambattista Basile, the father of the fairy tale (Basile predated and influences the Brothers Grimm). As was the custom back in the day, Basile’s stories for children were a lot gorier, grimmer, and suffused with eroticism, or fear of eroticism, than contemporary kid’s fare (at least on the surface). Garrone’s film takes three of Basile’s stories and visualizes them with no stinting on the nasty bits. The bloody heart of an ugly sea creature is eaten raw, an old woman in relatively wretched physical shape glues down her sagging breasts to her flank (in an attempt to make them feel younger for the sake of an oddly besotted king), a princess who is married off to an ogre has to watch helplessly as her husband slaughters any parties who attempt to come to her aid. These dismal doings, and more, take place in sun-drenched settings and are played out by performers in ornate costume.

This all should be very eye-popping, and much of it is. What it is not, unfortunately, is particularly involving. This is Garrone’s first English-language film, and while it’s plain that such an ornate production as this is best financed with the English-language market in mind, the compromise of cultural specificity also yields a gnawing banality. The movie has an international all-star cast that mostly conducts itself rigorously; although I must say, as much as I admire John C. Reilly, Renaissance antiquity is one period setting in which he does not acquit himself particularly convincingly. Reilly plays the king who hunts down the sea creature whose heart enables the Queen of Longtrellis  (Salma Hayek) to conceive a child. Unfortunately for the queen, she compelled a peasant woman to try the heart-eating method before her, and so her beloved white-haired son has a pauper twin he’s overly attached to, which yields calculations. A king in another land, Toby Jones' King of Highhills, has a pet flea that grows giant size; his almost literally cretinous act of mourning for the creature once it dies leaves his princess daughter in the care of the aforementioned ogre. In another nearby kingdom, Vincent Cassel’s debauched monarch King of Strongcliff is entranced by a song he hears sung by a dyer. Unaware that the woman is what they used to call a crone, he imperiously woos her, and the woman and her sister are flummoxed trying to either divert or maintain his interest. The complicating factor here is one sister’s inexplicable transformation into a youthful beauty.

Garrone’s film intercuts between the three stories, and this structure turns out to be the most vexing of the problems of “Tale of Tales.” The structuring feels arbitrary; the film switches narratives willy-nilly, without resolving a particular note or even aiming to surprise, jar, switch gears. And, despite the wealth of narrative detail within the stories, they remain ... well, pretty crude. The ironies on which they resolve either fall flat, or bludgeon; the coda, which unites the players from all three stories, is weak, and resolves one of them in a half-hearted way. While Garrone, set designer Dimitri Capuani, costume designer Massimo Cantini Parrini, and cinematographer Peter Suschitzky concoct splendid visuals that pay homage to a great tradition of the gorgeously ornate and sublimely grotesque in Western art, the movie too often compels the viewer to ask the one question that should never occur during a cinematic experience, which is “What’s the point?” As much candy as the movie encourages the eyes to gorge on, “Tale of Tales” is 135 pretty minutes of empty calories. 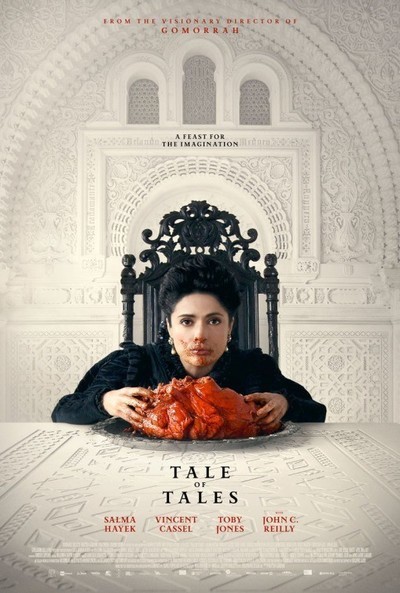 Salma Hayek as Queen of Longtrellis

Vincent Cassel as King of Strongcliff

Toby Jones as King of Highhills