We hear all the time on the talk shows from men who believe they are women trapped inside a man’s body, but what about a man trapped inside a woman’s body - against his will? That’s the peculiar experience undergone by the hero, or heroine, of Blake Edwards’ “Switch,” who begins the film as a male advertising executive named Steve and ends it as a female executive named Amanda, who is doing Steve’s job rather better than Steve ever did,

The character is played briefly at the beginning of the film by Perry King, as a male chauvinist pig who is so despised by the women in his life that some of them would like to kill him, Steve does indeed die, and goes on to the next realm, where he is informed that his behavior on Earth toward women has been so despicable that he will spend eternity in hell,

Is there any chance of an appeal? Only one, He will be sent back to Earth to search for one woman who loves him, If he can find such a person, he has a possibility of reprieve, There is a catch, He will return to Earth as a woman, to see what it feels like, Steve is caught up in some kind of magical heavenly process, and wakes up the next morning as Ellen Barkin - who plays the lead for the rest of the film, in a performance of true comic invention,

Barkin has always been an aggressive, self-confident actress with a touch of the masculine in her behavior, Remember her great scene in “Sea of Love,” where she pinned Al Pacino against the wall and had her way with him? Playing a man trapped inside her own body, she has fun with every possibility in the role - from peering in astonishment down the front of her blouse to staggering around the office in high heels,

“Switch” was written and directed by Blake Edwards, and it reflects two of his favorite themes, androgyny and finding yourself in another person’s shoes, His 1982 comedy “Victor/Victoria” starred Julie Andrews as a woman playing a man playing a woman, Now here is a film where the man must play the woman for the rest of his or her life, Steve, who takes the name of Amanda, doesn’t much enjoy the experience, But he - or shall we say “she” from now on - certainly does learn to see things from a new point of view,

One of her problems is to convince the other people in her life that this is really Steve, inside this good-looking female body,

The first to learn is one of Steve’s former lovers, Margo (JoBeth Williams), who is blackmailed into loaning clothes and providing makeup tips, Another person who has a great deal of trouble accepting the new reality is Walter (Jimmy Smits), who was Steve’s best friend when Steve was a man, And then there are new friends to make, including the millionaire perfume executive Sheila (Lorraine Bracco), who is a lesbian powerfully attracted to Amanda,

“Switch” has an intriguing premise and a terrific performance by Barkin, But it fails to really deliver on its promise, and I think the ways in which it deals with Walter and Sheila are crucial, Steve has always really liked Walter, So does Amanda, The two of them get drunk together, and Amanda is able to convince Walter that she is “really” Steve, but even despite that they find themselves attracted to each other, What do they do now? Would it be homosexuality if they made love, even though Steve is now Amanda? And what about the beautiful, sexy Sheila, who falls for Amanda? Would it be cheating for Steve to take advantage of that situation? Blake Edwards glories in questions like that, and his work has always been full of double-reverse paradoxes, But here I think he loses his nerve, He slips out of the implications of the affair with Walter by creating a convenient alcoholic blackout, and eludes the implications of Sheila by whipping up the lame excuse that, as a homophobe, Steve cannot be attracted to Sheila because she is a lesbian, This ignores the tendency of men - especially chauvinist pigs like Steve was - to find lesbianism sexy,

If Edwards had somehow found a way to really grapple with the implications of his story - if he had pushed to see how far he could go - “Switch” might have been a truly revolutionary comedy, on the order of “Tootsie” but more sexually frank, Unfortunately, he seems determined to make everything palatable to the sensibilities of the kinds of people who probably wouldn’t attend this kind of movie in the first place - and, in the process, he takes a daring idea and plays it safe, Too safe, 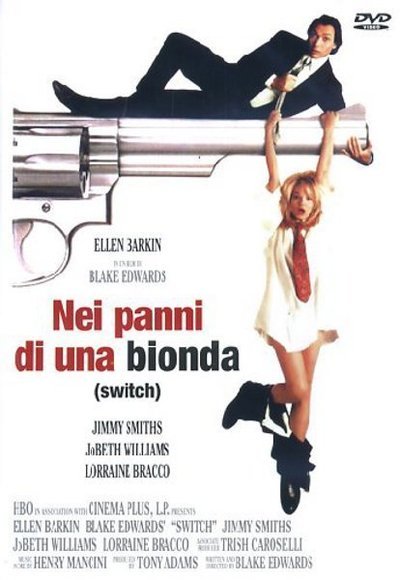