The great film analyst Tony Zhou named his famous series of video essays “Every Frame a Painting.” This movie could be titled “Every Frame a Ravishingly Pretty Painting.” Each shot in this mostly-World-War-II-set memory play, even those in the slightly cramped cottage occupied by lead character Alice Lamb, is a pictorial delight from start to finish. The cinematographer, Laurie Rose, is best known for the films “Kill List” and “Free Fire,” two intense Ben Wheatley thrillers set mostly at night in close quarters. Clearly the lens master relished getting outside and shooting the great British outdoors—white cliffs, placid ponds, swaying wheat, and other sights to induce Wordsworthian swoons.

The movie opens in 1975, “Kent,” at the aforementioned cottage. There, Lamb in late-middle age (Penelope Wilton) hunches over a typewriter; her concentration is broken by a knock on the door. A person from Porlock? No, but the effect is the same: the breaking of a spell. (And yes, I know, that’s Coleridge, not Wordsworth.) The interrupters are two adorable moppets collecting for charity, hoping to “help the aged.” Sneers Alice, “You know how you can help the aged? Well you can bugger off!”

Cut to back in World War II, and younger Alice still hunches over a typewriter and is mean to local children. Gemma Arterton looks pale and drawn here—perhaps she’s trying to make flesh the effects of a writer’s focused interiority, or she’s just going to keep de-glamming until people stop mentioning she was once the you-know-what in a James Bond movie—and seems in a perpetual huff. So much so that she ignores her mail, and is hence caught by double surprise when an adorable boy named Frank turns up at her door. A refugee from London, he’s supposed to shelter with Alice during the Blitz times. It’s a gig that scatterbrained Alice, deep in a project about pagan women, has forgotten that she actually volunteered for. On installing him in the cottage, she hands him some raw eggs and a small saucepan. “You don’t expect me to cook for you. There’s the stove.”

Frank is a sharp, sensitive kid. He loves his dad, an RAF pilot, and makes model planes of wood. He’s got a sharp eye and a keen perceptual apparatus overall. It is he who figures out that Alice is cranky because she’s been upset in love.

We have already figured this out because flashbacks. Alice in bohemian London falling for the beautiful Vera, played by Gugu Mbatha-Raw. Alice being shut out when Vera visits her ailing mother. Alice and Vera coming to terms that It Just Won’t Work. When Alice finally loosens up enough with Frank to play for him one of the phonograph records the couple loved, she tells Frank the record was gifted to her “by a friend.” “Was she the one you loved,” Frank asks. Like I say, sharp.

But even as Alice loosens up she still proves a very poor guardian. Her shrillness and tetchiness seem disproportionate, particularly after she’s bared some of her soul to the kid. And her emotional disability compels her to make some really bad decisions, such as withholding the news when tragedy hits Frank’s family. Writer/director Jessica Swale tries to make a case for Alice’s selfishness being tied into women’s oppression, but I wasn’t entirely convinced.

Add to this a “What Are The Odds?” plot twist that’s so preposterous it’s practically offensive and you have a movie that seems fit to go off the rails. And yet. Arterton, Mbatha-Raw, and the child actors—Lucas Bond as Frank and Dixie Egerickx as his school chum Edie—bring such commitment and integrity to their characterizations that one is inclined not just to hang in there but to root for them all. (And of course it’s always a treat to see Tom Courtenay in anything; here he plays a kindly village majordomo.) And then, too, there are finally the pretty pictures.

Editor's Note: A reader has pointed out that this review contains an error about the movie’s plot. Alice, the character played by Gemma Arterton, had not herself volunteered to foster a child and subsequently forgot her commitment. Revealing what actually happens would be a spoiler; but what was described is not it. Glenn Kenny apologizes for the error. 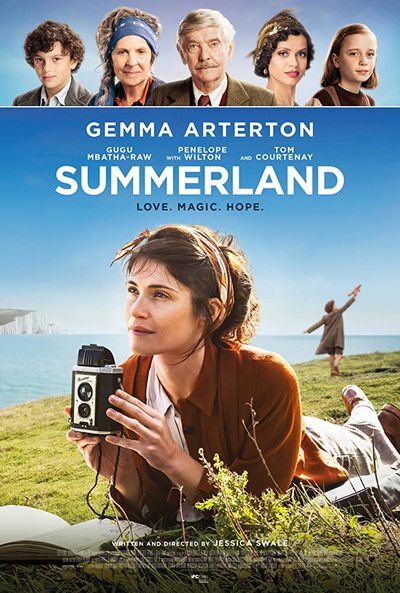