“It’s, like, really hard to keep making great content, you know? It’s a numbers game and right now I feel like a zero.” To Kurt Kunkle (Joe Keery), all of life is "content." Using the internet handle @kurtsworld96, he makes videos about his life, but so far has failed to create a following for himself. In his world, your worth as a human is measured by how many people tune in to your live streams, or "like" your videos. He is jealous of everyone who has found success as a social media "influencer" or "personality." He wants what they have. Told entirely through cellphone videos, dash cams, and CCTV footage, co-writer/director Eugene Kotlyarenko's "Spree" is an awkward and mostly unpleasant hybrid of social critique and horror-comedy, detailing how this psycho kid decides to take the gloves off and become internet famous.

Kurt Kunkle is Rupert Pupkin for the Internet age. He lives at home with his parents. He doesn't have much going for him. He wants to be famous, even though he has no skills, talents, or even an appealing personality. Then he comes up with an idea. He will be a ride-share driver, he will trick out the car with dash cams, and he will poison any passengers who annoy him. He will live stream all of this. It will be a surefire way to "grow his audience."

This is all told in absolutely frantic fashion, with non-stop blaring music, constant chatter from Kurt direct to camera, and a proliferation of screens, phone screens within phone screens within phone screens, rapidly unfurling comments sections, text messages coming in, DMs, etc. Sometimes there's a split-screen, sometimes the screen splits in three. "Spree" feels like a day spent entirely on the Internet, leaping around from YouTube to Twitter to Google to TikTok and back, never staying in one spot longer than a few minutes ... and I'm not sure that's a good thing.

Kurt's murder rampage is convenient in that he only poisons "bad" people: A racist white guy, a toxic misogynist who calls Kurt an "incel," a bunch of annoying party girls. (It might have been more interesting if Kurt's murder rampage was indiscriminate.) Kurt is infuriated that, even with all the murder and mayhem, he hasn't "gone viral." But then he picks up Jessie (Sasheer Zamata), a standup comedian who built her brand mostly through promoting herself on social media. When Kurt finds out how many followers she has, he becomes obsessed with her. He asks, "How did you grow your audience?" Jessie says, bluntly, "I'm funny." He wants to tap into her audience, he wants to piggyback on her "influence." But how?

There are a couple of funny moments. David Arquette plays Kurt's loser dad, doing a "DJ residency" at a strip club, and wanting to talk to his son about the "dope new track from Bizarre." A little more of that would have gone a long way. Zamata, a "Saturday Night Live" alum, is gifted and sharp. She's fun to watch. Even her silent reactions are entertaining. There is commentary buried in here somewhere, about how "influencers" don't have anything to offer, and people like Jessie are different. She has a skill. She would be doing her thing with or without social media. But Kurt? All he has is "content." To push this out to its furthest most absurd point, murdering people is now his "content."

The world of social media "influencers" provides rich territory for satire and critique, except for the core problem: the phenomenon is already a satire of itself. This situation provides a challenge for filmmakers wanting to include social media in the stories they tell. "Unfriended" and "Friend Request" go the horror route, effectively tapping into the general uneasiness people have about social media. "Ingrid Goes West" had real bite, and its critique of "influencers" (and those who emulate influencers) was ruthless. Bert Marcus' "American Meme" was deeply depressing, and even though it was a documentary it played out like a horror film. "Jawline" takes a more gentle approach, but the uneasiness is still present: what does it mean to be a kid—with no real skills—who feels like he has to "perform" for an audience? In years to come, what will the social media era look like? Will it look like human beings just lost their minds for a couple of decades? It's hard to know. "Spree" doesn't bring much to the table. You know how when you spend too much time online, and your brain starts to feel fuzzy, or like a part of you dissociates from your own overloaded nervous system? That's what "Spree" feels like. 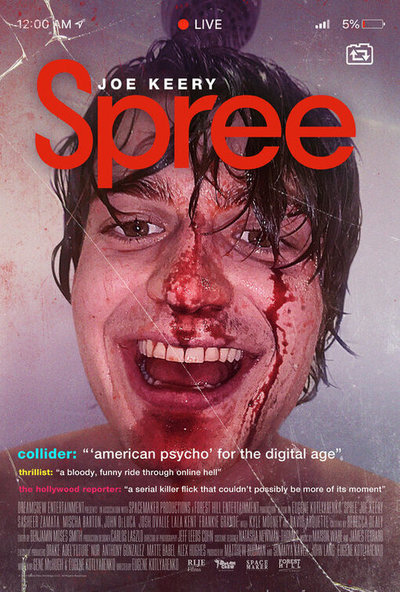