Liza Mandelup's documentary "Jawline," about 16-year-old Austyn Tester's desire to achieve social media fame, is an interesting experience. Mandelup has taken great care in how she presents Tester, as well as how she approaches this whole world of social media stars and the mostly tween-age girls who adore them. If you're over 14 years of age, all of it may seem like you've entered an alternate and very confusing dimension, but Mandelup presents without judgment, and in so doing provides understanding. There are disturbing undercurrents in this world, so present it's almost like white noise, and Mandelup avoids much of it, or touches lightly on it before moving on. This is a mistake. "Jawline" left me feeling wistful and very protective of Tester. Like his brother Donovan says early on, "Austyn is soft-hearted." A portrait of a kid determined to add "positivity" to the world through YouTube videos may sound like pretty grim viewing, especially to the cynical, but  "Jawline" works gently, slowly, presenting its subject and sub-culture with not just affection but sympathy, a sympathy very close to tenderness.

At first, watching Tester—a cute kid from Kingsport, Tennessee—make his YouTube broadcasts from a corner of his bedroom, chatting with the fans who sign on, it's hard to tell what exactly is the point of what he is doing. He doesn't have any skills like singing or dancing. His whole thing is presenting a kind and sweet persona, providing pep talks to his fans, all of whom are young girls: "Be yourself. Go after your dreams. Don't let anyone stop you." It's all very vague, but the girls giggle and squeal and when he interacts with them one on one it's as though Mick Jagger is on the line. Tester talks constantly about how he wants to add positivity to the world. It's almost heartbreaking. And, despite his obvious naiveté, he knows what "sells"; he studies the videos made by Julian and Jovani Jara, twins who present an unthreatening boyish friendliness, and have a gigantic following. He knows what he needs to do and be.

Tester lives with his mother and brother in a house full of cats. The family clearly has no money, and the abusive father left a long time ago. Mandelup films without condescension, and the cinematography by Noah Collier and Ben Whatley is poetic and emotional: Tester and his friends leaping into the river on a hot day, or wandering the night streets, past rusting cars on cinder blocks, a Coca Cola machine on the side of the road, an empty Dairy Queen drive-thru. There's a beautiful shot of Tester and his best friend lying in a hammock in the woods, bare legs flopped over each other, both of them engrossed in their phones. Considering his environment, it's not hard to see why Tester latches onto fame. Is it any different from the kids in Suzannah Herbert and Lauren Belfer's documentary "Wrestle," who depend on getting scholarships to college? In essence it's the same, but there's one crucial difference: the kids in "Wrestle" have a skill, a skill that provides a future (education, coaching). Tester has ... what?

Tester says things like, "I want to move to LA because that's the place where dreams come true." He means this. I feared for him. This fear grows when Mandelup moves the action to Los Angeles, following Michael Weist, a "manager" who helps kids achieve the social media fame they want. Weist shops on Rodeo Drive, and is only a couple of years older than the teenagers he promotes. All of his clients live with him in his palatial house (which is also a pig-sty, a frat house for camera-ready 15-year-old boys). Weist pays for everything, and they all sit around making videos and getting massages. It is truly La-La Land. (Weist became notorious last year when he "produced" something called "TanaCon," which ended in disaster. It wasn't as big a debacle as Fyre Festival but it—and he—made headlines.) The majority of "Jawline" sticks with Austin, as he acquires a "manager" from Houston (interviewed, creepily, in an empty office). Tester gets placed on a "tour," and returning to Kingsport is a tough adjustment. He finds it hard to put out "positivity" into the world, he stops making videos. This is the emptiness of creating a persona for online consumption: what happens when you don't feel it?

Mandelup made a very smart choice in interviewing the girls who flock to the "tours." These interviews help contextualize the "shows," where coiffed boys walk around on a stage, doing nothing but taking selfies with girls and signing autographs, causing mass pandemonium. But when these girls talk about being bullied, or feeling lonely, or having a rough home life, the comfort they find in these friendly non-judgmental boys who are like the really popular boys at school, except caring and considerate ... it makes sense. This is a pre-sexual "scene". It's kids finding comfort and creating a community where they feel safe.

The whole situation, though, seems ripe for abuse and exploitation. Michael Weist does himself no favors with his own chosen persona, and is barely an authority figure with his "charges." They all bicker like the kids that they are. Ominously, Weist has also been accused of sexual harassment. Tester's "manager" in the empty office seems like a a grifter, a scammer, and Tester is too wide-eyed gullible to notice any red flags. Mandalup does not follow these threads, does not dig in deeper to the seedier side of this hastily erected "business".

"Jawline" is not Bert Marcus' "The American Meme," a brutal documentary about adult social media stars like Paris Hilton, Kirill Bichutsky (aka "The Slut Whisperer), and Josh Ostrovsky, people who create "empires" with their "personalities." Watching "The American Meme" may make you want to unplug and move to a cabin in the wilderness for ten years, but watching "Jawline" makes you want to send Tester a supportive message, telling him to hang in there, he's doing fine. He adds positivity to the world already. He's a sweet kid and it's a scary world out there. Hopefully he finds his way. 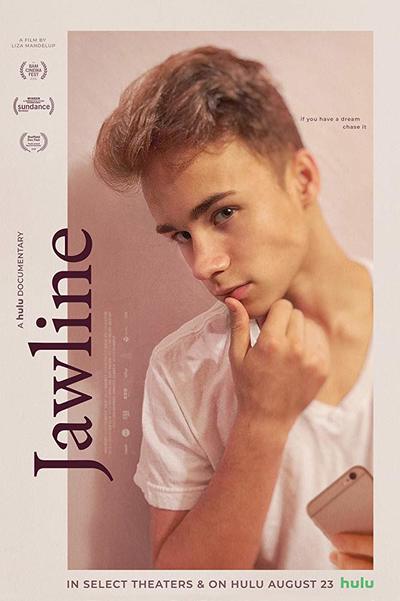