To its credit, "Friend Request" is upfront with its intentions and methods almost from the start. Our protagonist, a generic college student named Laura (Alycia Debnam-Carey), is watching a cat video on the feed of her non-specific social networking profile (It looks just like Facebook, just without the logo and with some of the nomenclature changed—"thumbs up" instead of "like" and "spread" instead of "share," for example). When she least expects it, the face of the cat transforms into a monstrous one, with sharp, pointy teeth and a roar. Yes, this is going to be one of those horror movies.

One could say that it doesn't disappoint, although one would also have to lower the bar of expectations to say that in a way that possesses any significance. Director Simon Verhoeven dutifully gives us multiple jump scares, in which an arm violently enters into frame or a face is suddenly in complete close-up on the screen. This is what the movie promises from the start, so there must be at least a few points awarded for truth in advertising, I suppose.

You probably know the drill by this point: The plot is a mystery, in which the characters—the ones who haven't been killed off, of course—have to figure out the reason that their friends are dying one at a time. In the process, some evil force is picking them off by supernatural means. The plot doesn't matter. The only requirement is that the screenplay (written by Matthew Ballen, Philip Koch, and Verhoeven) provides an angle that seems a bit different, if only to distract from how familiar the rest of the movie's game is.

The angle is that the supernatural killer is the spirit of a college girl named Marina (Liesl Ahlers), who committed suicide after Laura unfriended her on the safe-from-claims-of-copyright-infringement website. In Laura's defense, we learn from a lengthy, sort-of flashback that Marina was a cyber-stalker, who commented on every one of her posts, sent her repeated video chat requests, and started following her around in real life. Against Laura is the fact that Marina's own social networking profile was filled with clues about an unstable personality, such as unsettling photos of mangled faces and a video of someone stomping on a doll's head. Laura might have figured that out if she had scrolled down to the "See older posts" part of the page.

The movie's deaths are—uncomfortably, since it's simply a gimmicky hook—centered on suicide or, better, demonic possessions that make the deaths look like it. The ghost in the machine takes control of Laura's page, posting videos of her friends killing themselves in gruesome ways, starting with Marina, who hangs herself over a roaring fire.

As her online friends—all of whom the evil spirt tags in the posts—start to see the videos, they begin to unfriend Laura. It's probably an unintentional bit of social commentary that she still has hundreds of friends after two such videos are posted to her page. The last count we actually see has her hovering around 80 friends, and that's after three suicide videos appear on her page. This means that a few hundred people thought that someone posting two suicide videos was fine. Their limit, apparently, was a third video showing someone's bloody death.

Laura and her friends—including her boyfriend Tyler (William Moseley), her jealous ex Kobe (Connor Paolo), and her best friend Olivia (Brit Morgan)—look into Marina's past to determine how this is happening. All of the movie's mythology is explained in a flashback, which involves a coven of witches, a devastating fire, a boarding school, and a couple of child murders. None of it really matters, because the movie's sole purpose is to get each of the characters alone in a dark space, toss some unsettling sights and sounds their way, and, to top it off, have something pop on screen, with some loud growls and screams accompanying it.

There are flashes of inspiration here, such as repeated references to internet addiction (without any legitimate point, except that it literally will kill you), an unsettling and dynamic shot of rows of computer monitors illuminating a dark room with images of the face and eye of the spirit, and, most notably, a series of animations that tell the story of Marina's lonely, unfortunate past without the witchy hokum. These things aren't much, but when dealing with something as stale and formulaic as "Friend Request," you have to take what you can get. 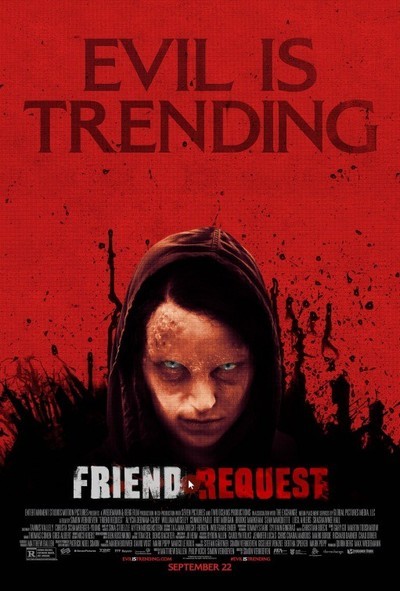